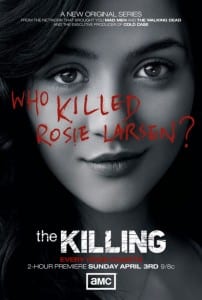 “The Killing” debuts as the latest in a series of critically-acclaimed serials on AMC, adding a layered detective saga the network’s ever-expanding slate of cult-and-critic darlings.

“The Killing” follows a murder investigation, and all those involved, over its 13-episode first season; each episode follows one day of the investigation. The series is an American adaptation of the Danish series of the same translated title, though the creator admits this iteration only uses the original as a blueprint.

The series features an interesting cast, part of the show’s initial attraction. Mireille Enos stars as Sarah Linden, the lead detective on the series. A relatively unknown actress, she’s brings an interesting delicate quality to the role, quiet and deliberate. Billy Campbell portrays a politician running for Mayor of Seattle whose mysterious past some how tides into the case; he’s a veteran actor who’s never had the role to test his acting mettle, so this could be that opportunity.

But the real gem of the series looks to be Michelle Forbes. Forbes captured a lot of love in recent years with turns on “Battlestar Galactica” and “True Blood,” but her role as a grieving mother looks to finally earn her great praise and credibility.

Given that each episode of the show features one day of the investigation, it follows a noticeably slow pace; there will be no 24-style episodes here folks. It’s mildly difficult to get through the first episode as the action begins with discovering the victim.

However, the pace of the show promises to focus on drama often swept up in the 15-minute investigations of today’s procedural crime shows. In the first two episodes of the series, its conjured up compelling characters, an engaging plot and a dynamic production.

It may get off to a slow-start, but the series’ potential outweighs its early flaw. And  rightly or no, but the show’s presence on AMC, succeeding ‘Mad Men,” “Breaking Bad,” and “The Walking Dead,” it has a certain credibility that allows for such a sequentially-developing approach. Either way, “The Killing” promises a noirish, slow-burn. Or, as I like to say, a good-ol-fashioned-whodunnit.