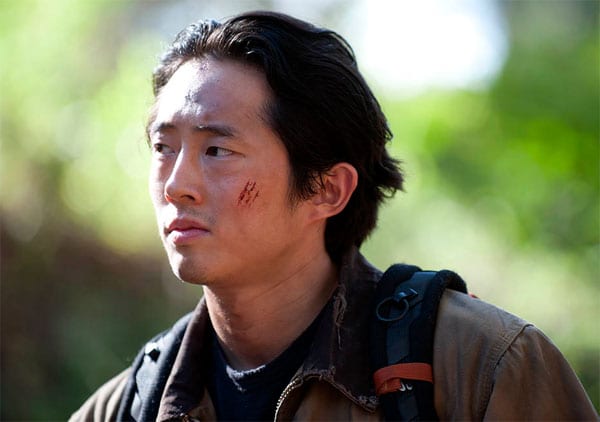 Glenn (Steven Yeun) takes center stage for part of this week’s episode of The Walking Dead.

So I’m still not over “The Grove” to be perfectly honest. It was just so chilling, and that’s definitely part of why “Us” ends up feeling pretty below average. The bulk of why it feels that way though is that this show follows patterns, and this is the typical softball setup to next week’s cliffhanger season finale.

The episode opens on Glenn and his group making their way along the tracks to Terminus. Eugene is busy trying to dispel mullet stereotypes by talking about dinosaurs and videogames with complicated words and his monotone southern drawl. He’s got Abraham convinced, but something about him just doesn’t sit right with me. You know, besides his obvious creeping on Tara.

Maggie gets to say a big fat “I told you so” to Bob and Sasha, because her bloody messages to Glenn worked, and he takes off running and smiling down the tracks straight into the opening credits. I’ve decided to keep track of the genuine smiles that happen in this episode because my prediction is that next week’s finale will be exponentially awful to the characters depending on how much they smiled this week. So Glenn’s grin here takes the number one spot.

Our second smile/harbinger of an intense season finale comes from Rick. He, Michonne, and Carl are making their way to Terminus as well, though they seem to have conflicting priorities. He’s worried about water and logistics, they’re worried about who’s going to win their bet for who can balance along the rails the longest. It’s one of the only lighthearted moments that we’ll probably get until next season, so we should cherish Michonne and Carl splitting one of their last candy bars and joking around with each other.

Oddly, that’s the only scene in which we see Rick, Michonne, and Carl. “Us” focuses mostly on Glenn’s group and Daryl’s group, so it looks like the finale will be Grimes heavy. I’m not mad about it; the show has been light on the Grimes family drama recently, so it’ll be nice to see them step back into the story spotlight.

The other group that gets the main focus in “Us” is Daryl’s newfound gang of unsavory dudes. They keep a pretty neat camp, all roped off with barbed wire and cans for noise alerts, and they all manage to get along despite being guys who typically don’t play well with others. The reason for this is, as we find out in Daryl’s fight with Len over who gets to eat the rabbit they both shot, Joe’s personal set of rules.

See, Joe believes that a few simple rules are necessary to keep them all from killing each other over every little thing. His rules are as follows: something belongs to you once you claim it (which, ugh, probably includes women the way these guys talk), there is no lying, and there is no stealing. You break the rules, you get beat up as severely as your transgression warrants. Since Daryl’s a newbie, Joe has the two guys split the rabbit.

Things don’t seem to work out on this show when one guy decides he gets to make the rules for everyone else. Just saying.

Glenn’s group, meanwhile, is experiencing a version of the same problem. Now that he has confirmation that Maggie is alive (or was when she wrote the messages), Glenn is an unstoppable force. No resting, no recuperating, just keep moving until they find either Maggie or Terminus, whichever comes first. Obviously Abraham has a problem with that since it clashes with his prime directive to keep Eugene safe until they reach Washington. The only compromise the two men can reach is to have Glenn give his riot gear to Eugene and they’ll keep going until sunset.

It was hard to see in the bigger group setting, but Glenn is one single-minded dude. Despite the obvious differences between him and Abraham (at least physically), that’s something they have in common, and I think it’s something they respect about each other.

Tara got injured when Abraham pushed her out of the way of the falling walker from the tower by the tracks, but she’s still willing to go with Glenn, whatever it takes. Rosita is quick to call Glenn out for taking advantage of Tara’s guilt, which I like about her. She’s not afraid to tell it like it is, a quality I always like to see in a female character.

Back on Daryl’s path along the tracks, the gang finds an old garage to camp out in for the night. Daryl’s reluctant to lump himself in as part of the “us” Joe is always talking about, but he can’t deny the fact that at least for now, he has to be part of the “us.” The other option is to go it alone, and we’ve all seen that turn out badly. There’s no surviving without other people anymore, and even if you did survive, as Daryl found out with Beth it’s not really living unless you have someone with you.

The guys all claim different sleeping spots, shuffling a silent Daryl along until he curls up on the first free patch of cement floor. It’s upsetting to see him being forced back into a group of Merles when he had grown so far away from being that guy while he was with Rick’s group, and with Beth especially in the last few episodes.

Len tries to start a fight with Daryl over his missing half of the rabbit from that morning. Daryl says he doesn’t have it, Len says he does, and it would be a whole Real Housewives thing if these guys weren’t armed and ready to defend themselves violently. The rabbit half turns out to be in Daryl’s bag, but as he suspected, it was planted there by Len. Joe turns Len over to the rest of the guys for his punishment for lying, and commends Daryl for his honesty. Something tells me being Joe’s teacher’s pet isn’t good for your long-term life expectancy.

Glenn and the others hit a roadblock when they come upon a tunnel that’s obviously full of walkers. Abraham does the sensible thing and suggests a detour, but Glenn is too close to Maggie now to give up. So he and poor guilt-ridden Tara decide to take their chances with the tunnel of death. Abraham, Rosita, and Eugene leave them with a flashlight and two cans of food and head off in search of transport to Washington.

They have an almost-touching goodbye where Glenn apologizes for punching Abraham in the face and Rosita gives both of them a hug. Too bad Eugene has to ruin it by telling Tara she’s seriously hot. When she tells him she likes girls, his response: “I’m well aware of that.” What a creep. I guess there’s still remnants of good old patriarchal values shining through in the zombie apocalypse.

The tunnel has a cave-in partway through that has a whole bunch of walkers trapped in its rubble. Tara starts to open up to Glenn about “Brian” and what it felt like to see her girlfriend, niece, and sister all die horribly in the same day because of him. They sympathize with each other, and I was so sure that because they were sharing this moment that something terrible was going to happen in this tunnel.

Naturally, nothing does. Oh, Glenn anxiously searches the faces of every walker in there to make sure one isn’t Maggie, and there’s a ridiculous number of walkers making their way towards our two heroes as they stand atop the cave-in, and there’s even an almost tense moment where Tara gets caught in the debris and offers to stay behind so Glenn can get out. Thing is, none of it felt real. The suspense felt contrived, and the longer it went without Maggie, Bob, or Sasha being one of the walkers, the more obvious it became that they’d be reunited.

And so they were, after Eugene deliberately misleads Rosita with the directions so they end up back on the tracks instead of on an interstate or something. The three of them pick up none other than Maggie, Bob, and Sasha, and they all come blazing to the rescue just as Glenn is ready to die along with Tara. I don’t doubt that he would have done everything he could to protect her, but I am saying I felt no urgency in their situation.

Husband and wife are happily reunited among the corpses of the zombies, and all seems well again. They give us genuine smiles number three and four, by the way. Glenn introduces Tara as someone he happened to meet on the road instead of as someone who used to be in the Governor’s inner circle (a wise choice), and he and Maggie proceed to get lovey-dovey for the rest of their scene.

She has him burn the polaroid of her sleeping that he carries with him because now that they’re reunited, he won’t need a picture anymore. So something terrible is now going to happen to one of them, probably, because what better way to tempt fate, am I right?

The group decides as a whole to check out Terminus for potential supplies and people to join them, but they’re all down to rejoin Abraham’s quest to deliver Eugene to Washington once they see the supposed sanctuary for themselves.

Daryl’s group is heading to Terminus as well, but for different reasons. When he wakes up in the morning, he finds that they killed Len in their beating of him. He almost lays a tarp down over the body, then seems to think better of it and walks off instead. Daryl, did you not learn anything about karma from Len’s situation?

Joe explains that they’re not really into Terminus for the whole sanctuary thing – no, he thinks that’s completely false. What they’re really doing is tracking this guy who was hiding in the house they were staying at. This guy who strangled their buddy Lou and left him to turn. This guy that only Bandana Man (real name Tony) saw. This guy whose discarded candy wrapper they step on as they make their way down the tracks. Yikes. And I used to worry about what Tyreese would do when he found out about Carol. Something tells me Joe’s gang isn’t going to be riding that forgiveness train.

The episode ends with the first party’s arrival to Terminus. Glenn and the others find a complex with fences, signs, and plants but an odd absence of people. The only one around is a woman named Mary who’s manning the grill when they arrive. She wants to help them get settled and make them a plate, which, judging by the suspicious lack of other human beings around, could be a euphemism for putting them on the plates. But we won’t know until we spend more time at Terminus.

Anyone have predictions for the season finale? I’m guessing at least one of the core characters dies, that Terminus is hiding something worse than the Governor, and that Rick ends up having to kill Joe or one of his cronies in a confrontation.

“Us” was very clearly just a set-up for next week, and I’m okay with that. It’s not an episode I’d seek out to rewatch, but some groundwork-laying is definitely necessary before we can get that action-packed season finale we’ve come to expect and love from The Walking Dead.