Editor’s note: This is a brief dispatch from Brittany Eddy, the Monitoring and Evaluation Officer for the Children’s Nutrition Program. Eddy has been in Haiti working with CNP since long before the January earthquake further devastated the country. Now water is the problem, both in the form of damaging rains and tropical storms and in the form of unclean drinking water.

The lack of government infrastructure has left the people in the grips of a deadly cholera outbreak that could kill many. CNP is working with Clean Springs International in an attempt to create a safe potable water supply in affected parts of the country. 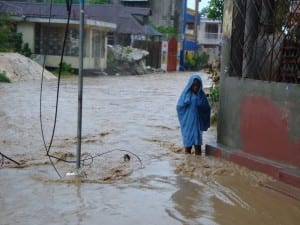 LEOGANE, Haiti — The rains began yesterday, about 6 p.m., intensifying throughout the night.

Luckily, we have not gotten much wind, so many of the tarps and tents are still intact. However, the downtown is very flooded with areas of water about 3 feet deep. The main roads downtown look like rivers and the currents in some areas are extremely strong.

To our knowledge, there were emergency shelters set up around Leogane. We are unsure of the status of many of the tent camps around town.

Children’s Nutritional Program made preparations to suspend programs until the storm passed. All patients from the Stabilization Center were discharged yesterday, so
none of the patients were directly affected by the flooding of the hospital.

Deep Springs International has been busy helping with the cholera response and hurricane preparedness. DSI sent 500,000 aquatabs and 225 gallons of locally produced chlorine to Port-au-Prince yesterday to be used in tent camps there, distributed by MINUSTAH. Chlorine production continues here at the house for use here in Leogane and to send to Port-au-Prince.

The CNP/DSI residence is dry and unaffected. The internet at the house is out, but we were able to use a Digicel modem.