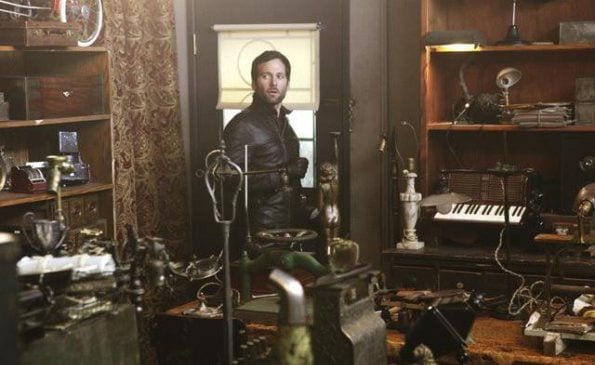 August's (Eion Bailey) identity is shrouded in fog as he searches for some magic in Storybrooke.

Three weeks ago now, “The Stable Boy” billed itself as the big reveal. It was going to answer the supposedly essential question of why the hell the Evil Queen hated Snow White so damn much. I thought the episode had its redeeming qualities—the girl who played Young Snow White, Bailee Madison, was a dead wringer for a younger Ginnifer Goodwin for one—but I was unsatisfied with the answer, which was just a variation of the usual conflict in Fairy Tale Land: lost love.

However, after seeing tonight’s episode I appreciate the brunt approach of that episode even more. Though creatively the backstory was stale, at least that question isn’t being dangled before me anymore. “The Return” is the perfect name for this episode because it took all the momentum back to where we started. In the real world, more questions heaped on the existing ones and virtually everything returned to the status quo. Thought the appearance of not-dead Kathryn would mean Emma’s one step closer to exposing Regina? Nope. Lovesick puppy Sidney Glass fabricates a confession that absolves Regina of any suspicion. Thought you might find out who exactly August is? Well, for a while that looked like a sure thing, then the rug was pulled out from under us. Oh, and were you wondering what would motivate Mr. Gold/Rumpelstiltskin to play for both teams (No, not like he’s bisexual. Like he’s helped both Emma and Regina sabotage one another)? That just gets all fogged up. And remember when Emma promised she was finally gonna start playing dirty to take down Regina? Well, she does that again. Except this time she explicitly mentions that she’ll take back her son. All right! Some finite goals, that’s progress, right?

Truthfully, it’s starting to feel like this whole season has been one long pre-game warmup for this last stretch of episodes. Most fairybacks have involved characters with little-to-no importance concerning the big picture: Red Riding Hood, Belle (will she ever be released from the basement of the hospital?), Cinderella, Mad Hatter, Grumpy and the list goes on and on. While some of these offbeat episodes have been engaging, the fairybacks I have been most drawn to are the ones that have impacted the main players. If it hasn’t revolved around Rumpelstiltskin, Snow White, Charming or Regina, it’s difficult to get invested because I hardly know them in another context. And ironically, because so much airtime has been occupied by ancillary characters, I feel like I don’t know as much about the stars as I should.

And if Kitsis/Horowitz should have learned one lesson from their time on LOST, it’s that the saving grace of a show with an intricate mythology, one that will create more questions each week than it resolves, is compelling characters. While I still get a kick out of the sardonic delivery of Jennifer Morrison, Emma is a nobody. She has trust issues, she’s good at detective work, and she’s grown to love her son, Henry. Did I miss anything? And while Mary Margaret and David may be the most multi-dimensional characters, they’re thrown into the same situations. Mary Margaret wants him in her life, then David messes up his chance. A repetitive ride could be thrilling, but there’s no sense of danger since we already know how this on-again/off-again relationship ends. Happily ever after does not get my heart racing.

While I feel harsh for beating up on OUAT like this, I wouldn’t be so hypersensitive if I didn’t think the ingredients for a heckuva show were here, especially when I don’t believe OUAT’s ambitions are similar to that of LOST. I could be wrong, but LOST was inherently a more avant-garde show. It employed religious allegories, time travel, and electromagnetism in an effort to create a dense universe that would say something about the very meaning of our insignificant lives. To me, OUAT is a recycling of old material, inherently less adventurous. But its source material is rich enough that you could create something entertaining and even enlightening if you wanted. But fun seems to be the target for his show. And I don’t want or need it to be more than that. Still, I feel like I’m being asked to forgive A LOT before I can just sit back and enjoy.

Now that the 700-word, I mean pound, gorilla is off my back, I’ll admit to being impressed with some of what transpired tonight even if upon reflection it felt empty. While watching I did a few double takes, and possibly even puddled a bit for Rumpelstiltskin. We began with August’s leg twitching something fierce, the pain seeming unrelenting. He joins his buddy Henry to get Operation: Cobra rolling. Although, August is slightly dishonest in that he uses Henry to tend to a personal matter. With Henry diverting Gold’s attention in the store, August scours the office. Gold finds him eventually and pretends to have gotten lost. Suspicious, Gold breaks into August’s room at the B+B and finds a drawing of the infamous dagger that had given him his dark powers as Rumpelstiltskin.

In the FTL, those dark powers are alarming Rumpy’s son Baelfire. While he used his influence to bring the Ogre Wars to a truce, he also become ruthless in protecting his son, turning one passerby into a snail just to crush him. Understandably, Baelfire wants to find a way to reverse this enchantment that has turned his dad into a malevolent force. Rumpy’s sure that the magic is irreversible. Only if he’s killed by the dagger will the power be transferred to another soul. Determined, “Bae” makes his dad promise that if he finds another way, he’ll oblige. Immediately, it was clear to me that this was the “one deal” he tells Regina about earlier in the episode, the only deal he’s ever broken.

Now weary of this stranger that Emma describes hilariously as “A typewriter wrapped in an enigma wrapped in stubble” (there were many moments actually where I thought the writers might have been mocking themselves or at least their stiffly rendered characters), Gold tails him. He follows him to Mother Superior. After threatening to double the rent on the nuns—I keep forgetting he’s like the Trump of Storybrooke—she tells him that August sought counsel. He’s come to town searching for his father, and may have found him. Emma, in an almost insultingly observed B-plot, confronts Sidney Glass about the bug he installed in her office. When she realizes that he’s loyal to her because he’s in love with her, she shrugs it off, “Fine. Whatever.” Emma really was the comic relief for my frustration with this hamster wheel of an episode.

Baelfire racks his brain for a cure and consults his friend, Morraine. She suggests a great force of good magic, The Blue Fairy. The boy summons the fairy and she says she cannot return his father to who he was, but she can send them to a place where dark magic has no power. She produces a magic bean that she says he and his papa must follow if Rumpy’s to be restored to his old self. This sets us up for a devastating scene, possibly the best of the episode, where Baelfire plants the bean and a green vortex appears. Baelfire begs for his father to join him, but his cowardice gets the best of him. He had originally sought this power so he could protect his son, but now he’s so consumed with maintaining that power, he’s lost sight of what matters. He lets go of his son’s hand and Baelfire’s sucked in, and the portal closes. His cries afterward where he regrets not joining his son really were gut-wreching and possibly the most genuine emotion shown by someone not named Ginnier Goodwin, Jennifer Morrison or Josh Dallas throughout the course of the show. Good on ya, Robert Carlyle.

After an appointment with Dr. Hopper (oh yeah, him), Gold gets up the nerve to confront the man he believes is his son. And I’ll admit, Eion Bailey had me fooled too. When he said, “I guess all the lying can stop…Papa” I thought it was a done deal. But to Bailey’s credit he played spurned little boy as a grown man quite convincingly. And I thought, YES, this is what I waiting for. Real juice, real crossover of the fairyback and real world events. Then Rumpelstiltskin dug up the dagger and handed it to August to prove he has changed, and all the emotionally resonant material was killed by August turning the dagger back on his “dad.” Dammit is right. August isn’t Baelfire after all. That’s next week apparently. Why must you tease me with a huge development and then yank it away! The only real news of note is August is dying, and he needed the dagger’s magic to heal him. But as Gold points out, magic doesn’t exist here. That was the condition of the curse, which, obviously, was made by Rumpy himself so he could find his son. So while I’m glad Rumpy has a solid motivation, it doesn’t explain why he’d want to serve as a double agent. How does that help him reunite with his son? Enigma wrapped in enigma.

On the sidelines we had another Mary/David “It’s Over” moment. Oh can’t those crazy kids just kiss and make up! There’s also the classic case of using dialogue to convey overt thematic ties. When Mary talks about something out there keeping them apart and David replies, “Like dark forces?” I audibly groaned. I guess it was a nice change of pace to have David supply the groaner instead of the EQ. It was just so inauthentic, it was unforgivable. And yet, the exchange was almost redeemed by Mary’s chilling comeback to David’s “But I love you.” She twisted the proverbial dagger with “And that’s what makes it so sad.” See, that was honest and real, not tailored to relay exposition and reiterate a message. Why can’t we have more like that?!” says the oft-burned critic in the corner.

Although Giancarlo Esposito’s pathetic admission as Sidney was a deadpan mumble delight, I couldn’t help but think well, Emma’s gonna get angry that she’s been thwarted once again and promise to go Sarah Palin-rogue on her ass and it won’t happen. And yet, the finale approaches. SOMETHING must happen. And while I can appreciate how networks operate, and the need for monumental finales, couldn’t Emma have grown a tad more aware, shown some savvy or gone off the hinges just a smidge so that we wouldn’t come to expect disappointment from the anointed “savior?” I mean, I bet there were the haters who thought Jesus was just some hotshot carpenter, but I bet even he wouldn’t have put up with Regina’s B.S for this long. Sorry for the sacrilege, I just hope that regardless of how she changes the game, it feels like the tectonic plates have shifted. I’ll confess to at least loving how she categorized Regina as setting the board so no one could win, and promising she would play an entirely different game. Even if it feels like a campaign pledge, it was rhetorical candy. If only this episode could have been sweet till the last morsel. Instead, I felt manipulated like I was Pinocchio (who I presumed August would be as I mentioned in the comments last time to Mystic), and I don’t want no strings on me. Maybe The Blue Fairy will grant my wish…