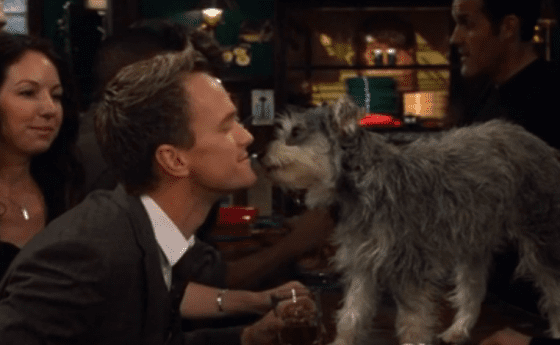 In “The Autumn of Breakups” Barney makes a dog his new wingman and names him Brover.

As this transitional eighth season of How I Met Your Mother continues, “The Autumn of Breakups” was yet another stage completed in the journey toward what we already know awaits Ted, Robin and Barney in the future. When Victoria starts hinting at needing more of a commitment from Ted in their relationship, they come to realize that the one thing holding them back is the same thing it has always been: Robin. Once and for all, Ted must choose between being friends with Robin or being with Victoria. Meanwhile, Robin worries about Barney, who has found a new best friend and wingman in the form of a dog he’s named Brover. Ultimately, “The Autumn of Breakups” was a strange episode (with some truly bizarre moments from Marshall) that was light on laughs and rather dulled by the fact that Victoria and Ted’s troubles came as no surprise.

When Barney sits down at MacLaren’s with Robin and Nick, he informs them of his newest bro and wingman—a small dog that he found on the street, who he’s named Brover. Robin expresses concern to Nick about Barney’s attachment to the dog, seeing it as an unhealthy way of coping with his breakup with Quinn. Nick isn’t worried at all, and instead is much more worried about coming up with a new catchphrase for his cooking show. Robin eventually invites Barney to have dinner with her and Nick at their apartment so that she can further assess how he’s handling the split.

Meanwhile, Ted talks to Marshall and Lily about how Victoria may be sending him signals about a need for more commitment. In one of the episode’s odder bits, Lily has been training Marshall to give advice in a sassy girlfriend-y way because she’s tired of doing it all herself. Ted insists that if there was an issue, Victoria would come right out and say it rather than beat around the bush. But when he confronts Victoria about it back home, she sarcastically pulls out her old wedding dress and asks Ted if he thinks she’ll ever need it again. She explains that there’s something holding them back as a couple, and later when Ted proposes to her, Victoria agrees to marry him under one condition—that he stop being friends with Robin.

Marshall is consistently the funniest character on How I Met Your Mother and normally just about every joke or gag involving him is a riot.  But the sassy-talk Marshall concept in “The Autumn of Breakups” really missed the mark and came across as more uncomfortable and awkward than comedic.  The show has always toyed with Marshall’s more feminine qualities or actions, but tonight’s episode just took the long-running joke too far.  Marshall seemed more gay than a man acting like a woman, and a gay Marshall Eriksen is a strange thing to behold. Obviously, The Autumn of Breakups was bound to focus more on the show’s doomed couples, but a better Marshall/Lily appearance would’ve helped lift the episode above the mediocrity of Barney, Ted and Robin’s relationship struggles.

Barney arrives at dinner with Robin and Nick with Brover nestled in his arms. While they eat, Barney describes how his wingman-ship is a two-way street with Brover: he hangs out with other dogs’ chubby friends, plays the jerk, and even finds out how old Brover’s potential dates are (in dog years, of course). But just as he finishes describing the great team him and Brover make, Barney gets a call from the dog’s owner who wants him back. Robin says she’s sorry to hear that, and Barney calmly excuses himself from the table and makes a move to jump off Robin and Nick’s balcony.  Robin runs over and stops him, and as Barney says a tearful goodbye to Brover she tells Nick that she’d like to go with Barney when he returns the dog to it’s rightful owner.

Barney’s bro-mance with Brover was the best part of this otherwise dull episode, bringing the majority of the laughs.  Now that How I Met Your Mother is into its eighth season, Barney’s womanizing ways have grown pretty stale, but this was one way to give it a new spin that was actually rather funny.  Plus, having Barney’s new best friend and best wingman be a dog was an excellent way of showing just how hard he’s actually taking his breakup with Quinn.

Robin accompanies Barney when he returns Brover to his rightful owner, and when she mistakes them for a couple (wink, wink), Robin plays the wingman and makes up a story about being his sister. Before following the dog’s owner into her apartment, Barney pauses to reflect on how Robin is the best wingman ever and to hint that there is clearly more to come for his relationship with her.

Over at MacLaren’s, Ted waits for Robin to arrive so that he can talk to her about something serious. But rather than seeing Robin sit down across from him, Victoria takes the seat.  Ted explains to her that he can’t stop being friends with Robin. A teary-eyed Victoria tells him, “I really hope you get her some day,” and leaves Ted for good. Later, Ted makes Marshall and Lily promise never to tell Robin the true reason for his breakup with Victoria.  However, Narrator Ted reveals that she did find out eventually, but that, “We’ll get to that…”

I’m not sure how other HIMYM fans feel about it, but I’m worried that Robin is going to turn out to be “the mother.”  Even though there’s been plenty of future glimpses in which Robin is clearly marrying Barney, I’m concerned that the writers are going to pull a 180 on us all and somehow put Robin at the Farhampton station, where Ted finally meets the future Mrs. Mosby.  Maybe I’m reading too much into it, but the “We’ll get to that,” comment at the end of “The Autumn of Breakups” seemed like a hint, as did Victoria’s line about getting her some day.  Lately Ted has sworn up and down that he’s over Robin, but things always lead back to her it seems. If Robin ends up being the mother, after eight seasons of their back and forth, on and off again relationship, I will be sorely disappointed.

Much like previous episodes this season, “The Autumn of Breakups” suffered from the writers’ decision to give us a sneak peek into the future. By knowing that Barney will eventually be taking Robin to the altar, it renders everything currently happening null and void, and utterly boring. When a main character goes from proposing to his girlfriend to then breaking up with her in the same episode, that should be a big event. But everybody knew that Ted’s relationship with Victoria was doomed from the start, as is Robin’s with Nick. Yes, it was fun and exciting when it was revealed that Barney was set to marry Robin, but now everything leading up to that moment has become mostly superfluous and uninteresting. It doesn’t mean that these episodes can’t be funny, but as far as the main characters’ actual storylines go, there isn’t much that can be done to make them more appealing. I hope next week’s episode will conclude “The Autumn of Breakups” with Nick and Robin’s split, and we can all be one step closer to the fairy-tale ending we caught a glimpse of at the end of last season.