There is absolutely no reason in the world why an action movie in which Liam Neeson punches a wolf in the mouth should be any good at all.

The very premise seems like sheer B-movie schlock, another black mark in Neeson’s already questionable late career. Joe Carnahan, the writer and director of the film, has a resume that includes a disastrous version of “The A-Team” and “Smokin Aces”, a hyperactive Vegas thriller. “The Grey” should be the movie you rent from Redbox and watch while drunk, stuffing cheese doodles in your maw and laughing when Neeson makes Wolfman puns.

And yet…and yet. Carnahan, in a surprising move, chose not to make this into another lame, faux post-modern black hole of cheese. He made a film. A very good film actually, using stripped-down and rugged camerawork and sound to tell a story about primitive forces.

The 6 men who dominate the movie are pipeline workers in Alaska, heading back to the lower-48 for a break. Their leader Ottway (Liam Neeson) was tasked with protecting the pipeline and its workers from wild animals, so when their plane goes down in the middle of a wolf pack’s territory it’s only him who has any kind of expertise to lead them out.

The main characters seem undomesticated even before they are thrown into the merciless wilderness- Ottway himself is a man on the edge, haunted by a lost love and verging on suicide. The others are a motley crew of deadbeats, ex-cons or similar, hopeless cases who come to work in Alaska because no else will take them. But their breed of wildness seems positively tame when they are left alone in the woods, being stalked by a band of timber wolves (the wolves appear to be mainly computer-generated, but that doesn’t make them any less frightening). 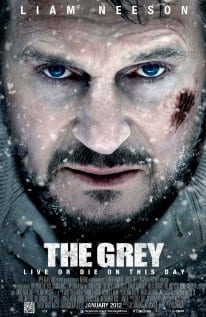 Carnahan knows his way around an action scene, and infuses everything from a plane crash, to a wolf attack, to a jump across a ravine with blunt horror and panic. For once I was unconcerned that the camera was shaking and obscuring my vision, because I have a feeling that a plane crash and a wolf attack wouldn’t seem very clear to the person experiencing it. He matches the bluntness of the camerawork with precision sound, eschewing music most of the time and just using a howling, relentless winter wind as the background.

Neeson is positively electrifying, playing a ravaged husk of a man who wants to end his life even as he’s thrown into the odd situation of trying to keep himself and his comrades alive. And while everyone probably will pay their $10 plus tax to see Liam Neeson box a wolf with broken glass taped to his knuckles (and note that scene is actually not what it seems in the trailers), I find him even more riveting when he is doing quieter things, like telling an injured man that he is going to die, or staring worriedly at a thermos of dwindling jet fuel they are using to start their precious fires.

Carnahan obviously owes a lot to the Werner Herzog, who’s made an entire career about discussing man’s strange relationship with the natural world. Carnahan even references Herzog’s “Grizzly Man”, though it’s very telling that the reference is when a character refers to it as “that movie about the fag that loves bears.” There is little Disneyfication of the natural world here, and the wild is considered beautiful, vast, unknowable and unmerciful. And the emotional devastation and fear you feel comes not with the first wolf death (which is expected) but the realization that if these men are unable to start a fire in a snowstorm they are all going to die- not from a villainous wolf, or a complicated human scheme, but by the immutable fact of the cold. Fire: you live. No fire: you die. There is nothing more primitive, more basic, or more animal than that.