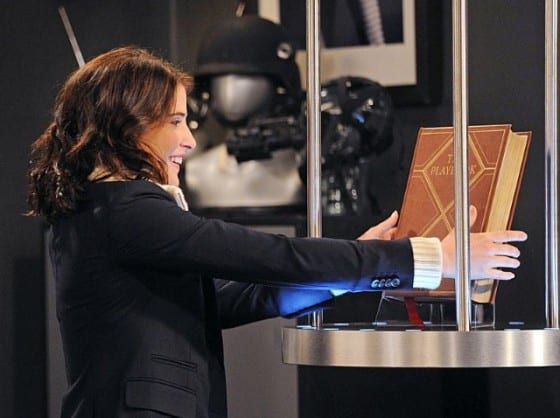 Robin hopes to show Barney’s secret playbook to Patrice and end their relationship once and for all.

The Over-Correction was another lousy episode in what’s shaping up to be the most disappointing season of How I Met Your Mother yet.  Marshall and Lily struggled with visiting parents and Ted hounded his friends about returning his borrowed possessions, while Robin continued to freak out about Barney’s new relationship with Patrice. Though there were a few fleeting moments that were actually laugh-worthy, most of the jokes just really missed the mark.  That, combined with boring storylines all around, made for one forgettable episode.

One of the funnier parts of The Over-Correction was the idea itself: that when a person makes a mistake, they tend to over-correct and do something completely opposite afterwards. The best joke of the night came from Ted’s flashback to the first girl he dated after splitting up with sweet, innocent Victoria. His new bad girl, an imprisoned convict, promptly tells him to, “Hang up, you little bitch!” when doing the phone hang-up game that new couples often play.  Another winning joke was the flashback to Marshall’s over-correction of doing his fish joke with attitude (and later like Chris Rock) because the owner of the comedy club told him the joke needed more edge. Unfortunately, the reason for Ted’s using such terminology is one of the major reasons that The Over-Correction failed.

Barney’s relationship with Patrice better wrap up soon, because it’s dragging down this season of “How I Met Your Mother.”  For one, it’s completely unrealistic that Barney would ever consider dating a girl like Patrice, because (no offense to the actress that plays her) she’s not exactly a looker. Ted tries to make sense of this uncharacteristic move by explaining that Barney is over-correcting for the lack of trust he had in his previous relationship with Quinn. But even still, Barney would have looked for a more attractive, reliable woman than Patrice and much less lovey-dovey too.  Probably the worst byproduct of their relationship is Robin’s annoying, thinly veiled despair over Barney rejecting her.  Her vendetta against Patrice is entirely annoying and not the least bit amusing, which makes Robin’s character extremely unlikeable. And then there’s also the fact that we all know Barney and Robin end up getting married, so this whole Patrice fiasco is utterly pointless and a waste of time. Sometimes it can be argued that the journey is more important than the final destination, but here that hardly applies.

Negating the entire Barney / Robin / Patrice problem, it also feels like How I Met Your Mother has struggled with its comedy lately. In The Over-Correction, the “Property of Ted” tags on all of his borrowed-but-never-returned possessions were funny at first but quickly over-used.  The “How dare you! … And what is that?” joke that’s been used for the past few episodes isn’t all that amusing.  And let’s try to wipe from our memories Ted’s gag-worthy statement, “Or should I say, Borrow-ney?”  Obviously the joke was supposed to be bad, emphasizing how lame Ted can be, but that didn’t keep me from cringing. There were a few effective bits in The Over-Correction, but the humor was nothing close to how strong it was in previous seasons, when fans could expect to laugh from start to finish. It’s hard to pinpoint why exactly these new episodes are so unfunny comparatively, but there’s no denying that it feels like the magic is gone.

As Robin continues to make a fool out of herself and Ted keeps griping about things his friends never returned to him, Marshall and Lily deal with the problem of visiting parents.  Mickey is still living with them so that he can help nanny baby Marvin, and now Marshall’s mom wants to spend a few days with them as well.  Lily tries to get Mrs. Eriksen to stay elsewhere, but she ends up at their apartment and soon starts up a strictly physical relationship with Mickey.  Again, this feels like the writers are sacrificing character integrity just to get a (not so great) joke out of it.  Remembering the kind of man that Marshall’s dad was, it makes very little sense that his mom would be interested in hooking up with Mickey.  Is she so desperate to get laid that she couldn’t walk down to the street and find a better looking guy to “get back out there” with?  I know that Mickey and Judy are minor characters, but it still felt weird that they would be interested in one another.

With yet another unfortunate episode, this first half of season eight has been a letdown.  The next two episodes (and the last two before the mid-season break) are titled The Final Page: Part One and The Final Page: Part 2.  Let’s hope that come spring, “How I Met Your Mother” can finally put an end this forgettable chapter and begin a brand new one.