The names of subjects have been changed to protect their privacy and safety.

It was mid-day. Northeastern University student Sarah Alverston was sitting in the library staring blankly into a textbook that she couldn’t seem to focus on. She just had a fight with her boyfriend, and she knew she wouldn’t get anything done until she talked to him. So she sent him a text message.

“Sorry about earlier,” it said. “I’ve just been stressed out about other things. Want to meet me at the library? I want to see you.”

About 15 minutes later her boyfriend, Josh, walked up to her table on the second floor. He sat down and apologized as well for being stubborn. Then he gave her a look.

She knew what that look was for, and she whispered to him, “I can’t leave the library right now I have too much to do.”

But he told her it didn’t matter and winked. He motioned to one of the group study rooms. At first she thought he was crazy. There were people sitting right outside the room. Half of the door to the room was made of glass. There was no way. But then she got a rush of excitement and thought why not? It would be a great story to tell.

Alverston is certainly not the only college student who has performed sexual acts in public. One sophomore at Northeastern, who spoke under the condition of anonymity, said that part of her job when she worked at the library was to make sure no one was doing things “they weren’t supposed to be doing.”

Last year during Northeastern’s annual sex week, a magazine was put together full of articles about sex. The magazine was called “Stripped” and contained a list of “Top Ten Places to Have Sex on Campus.” The list included places like the college’s underground tunnel network and the saunas at the gym. Number one was the library.

“I know tons of people who have had sex in public places,” said Alverston, in a recent interview. “I thought it sounded fun but I never planned on actually doing it.”

Other students have admitted to similar sexual experiences, the scenes ranging from dorm showers to parking lots. Jordana Kerr, a sophomore psychology major at Northeastern admitted to doing the deed in one of the school’s indoor gymnasiums.

“I worked there life guarding,” said Kerr. “(My boyfriend and I) didn’t get a lot of alone time because we both had roommates. One night he came to visit me and we ended up having sex in the racquetball courts. It was thrilling and it was a fun experience.”

However, if someone were to get caught, the student conduct handbook mentions these types of incidents would be handled as “sexual misconduct.”

Despite prohibitions and threat of punishment, many popular television shows portray sex in public as a natural and desirable activity. An episode of Sex and the City deals with a man who can only have sex if he thinks he might get caught. An episode of Friends includes a discussion about the craziest place the characters had ever “done it.” Even Homer and Marge Simpson rekindle their sex life by doing the deed at a miniature golf course.

This generation did not invent the idea of having sex in a place besides a bed. The openness and in-your-face style however, is something new.

John D’Emilio, author of the book “Intimate Matters: A History of Sexuality in America,” thinks that every generation feels the need to be riskier than the one before it.

“It’s almost as if young people are pushing the boundaries one step further,” said D’Emilio. “Fifty years ago co-ed dorms didn’t exist, and now they do. And there’s no longer a curfew either. If you want to break the boundaries, you have to find a new way to do that.”

How Sex Has Changed 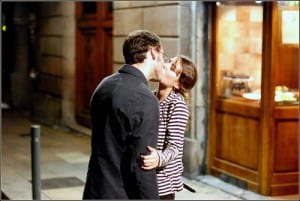 Public displays of affection are a pretty common sight around the streets of Barcelona. Media credit/mmoorr via Flickr

According to experts, each generation has had a different attitude about sex and adopted different ways of expressing themselves sexually as a reflection of the beliefs at the time. Sex in public did not used to be a normal practice. D’Emilio relates this trend back to the end of the 1800’s, when it was looked at with disgust.

“At the end of the nineteenth century there was public sex emerging,” said D’Emilio. “But it took place in neighborhoods that were deemed to be sex neighborhoods like red light districts where there was prostitution. This behavior was outrageous at the time.”

Those who were not labeled as outcasts of society kept sexual acts very private. It wasn’t until the emergence of automobiles and their growing popularity did that change. At a time when mobilization was much more plausible, couples began courting in their cars. Whether taking one another on dates to the movies or a remote place for privacy, sex began to move out of the bedroom for young people.

Sex was still relatively private though, and society built structure around this principle. Gina Ogden, a sexual therapist from Cambridge said sex was purposefully very repressed in the minds and practices of people in the past.

“Before and after the explosion of sex in the 60s and 70s, people were very constrained in their thinking of sex,” said Ogden. “There were male and female dorms. There was much less ability to be overtly sexual. During the Reagan years, I was a school psychologist at a boarding school. There was a big movement against ‘public display of affection,’ and people were getting expelled for holding hands. It was awful.”

The shift in how society views sex and also how people express themselves sexually has been a drastic one since then. D’Emilio thinks that societal acceptance plays a big role.

“What has really changed since then is that the assumption has become that young people will have sex before marriage. That’s just normal,” D’Emilio said. “It doesn’t push the boundaries.”