Want to know a secret? I’ve never seen a single moment of a Harry Potter movie, nor have I read a page of any of the books. Nothing against

the franchise, I just never did. In fact, the only real concrete memory I have of the series is the god awful first Deathly Hallows game.  Is this really what people wait in line for?

The good news is that pretty much everything has been refined from The Deathly Hallows: Part 1, the bad news? It’s still pretty bad. Though there’s been obvious effort to tweak and tune the mechanics from the last game, they still don’t work and can be incredibly frustrating. With painfully bad voiceovers and a dull, short campaign, Harry Potter and the Deathly Hallows: Part II is not a good gaming send off for a franchise that defined a generation.

Much like its predecessor Deathly Hallows: part II plays like Gears of War in a Harry Potter mask. If that sounds weird…well that’s because it is. You’ll take cover and use your wand as your main weapon.  Different spells have different effects and can be used to take on different tasks – when they arise. That last part is key as the majority of the game is an incredibly repetitive affair.  Walk in to an area, cast a few spells, defeat bad guys and repeat until the game is over.  From time to time you’ll get new spells that will make the game feel a bit different (especially towards the end of the game), but for the bulk of the game, it all feels the same.

The most disappointing part of the game happens when you figure out just how paint by numbers the game is. Take the cover system for example; in a game like Gears of War, there’s multiple options for cover in an effort to be strategic, but in Deathly Hallows, it’s obvious that the developers put the cover points in where you’re supposed to take cover.  It gets to the point where you’ll see cover and instinctively know that death eaters are going to pop up right in front of it. This type of handholding becomes a bit more accepting when you take into account the game’s target audience; but it’s no excuse for the lazy level design. 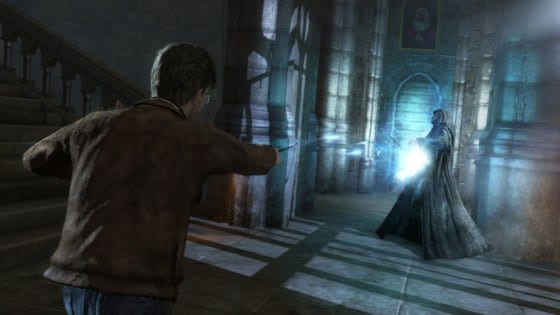 One of the game's many different spells

For what it’s worth though, the game is full of great ideas – they’re just not implemented well. When you learn new spells, it’s a great deal of fun to experiment with them, but that feeling goes away when you realize that they all pretty much have the same effect. There’s a cool spell towards the end of the game that allows you to teleport between cover points, but it comes so late in the game that you never get the chance to truly explore what it can do. Perhaps Harry Potter and the Deathly Hallows Part II is most disappointing because it could have been much, much better.

The voice work in the game is done by impersonators, rather than the actual actors, and a few of them, like Harry, are rather impressive, but others are laughably bad. Characters like Voldermort come off as mere cartoon caricatures of their on screen personas. Visually, the game is a mixed bag. The screen is presented sans hub, which offers a nice and clean presentation, but the environments are so diluted and animations are so stiff that it doesn’t really matter. The first game had an embarrassing number of glitches that made the title’s faults stick out that much more, though most of those glitches are now gone, the graphical issues somehow still stick out.

Harry Potter and the Deathly Hallows: Part II will only take most gamers about 3-5 hours to complete, which is incredibly short when you take into account the game’s $50 price tag.  There’s no extra modes, no multiplayer and thus no real reason to go back through a second time. With this being the last game of the series, why not offer collectibles or hidden nods to past stories for the fans? Sadly, Deathly Hallows: Part II is as bare bones as a game can get.

The Blast Factor: Harry Potter and the Deathly Hallows: Part II is miles ahead of the first game, but sadly, that’s not saying much. It’s a bare bones, flawed and unimaginative title that sadly never delivers on its novel ideas. So long Mr. Potter, sorry you never got a decent gaming experience.