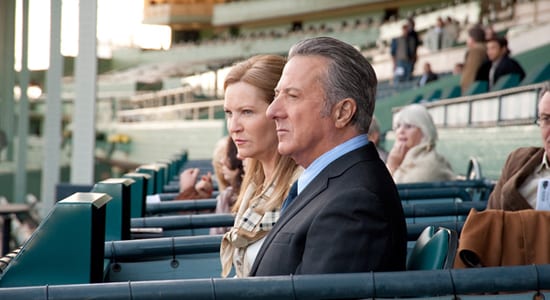 Although human beings can be incomprehensibly complex, we’re also a fairly predictable bunch. I found it absurd how easily disarmed I was by the final shot of Ace and his horse, Pint of Plain, nuzzling each other. That killed me. And god dammit David Milch (the show’s creator) and tonight’s director, Brian Kirk, knew that. And I’m willing to bet money they knew that by repeatedly showing Joey leaving messages for his ex-wife Lynn I’d begin to pity how his life’s unraveling.

Episode Five was a symphony of evocative notes, designed to send us into a whirlwind where we’d begin to empathize with the despicable, and be cautiously invested in the tender. Nearly every Santa Anita patron has a hidden agenda they are chasing, but all the scheming and the sketchy maneuvers come to a grinding halt for the beautiful beasts.

With the rise of the serialized drama, multi-season story arcs constructed with an endgame in mind, there isn’t much room for episodic routine on acclaimed television. Though the “slow burn” of “Luck’s” early episodes couldn’t be mistaken for standalones, they established a formula: the unfolding of one day at the track.

We could count on a horse race being at the midpoint, and we’d end with Ace and Gus’ reflections on the day. Since “Luck” serves as a thorough examination of the horse racing world and those that inhabit it, a foreign entity to most of the viewing public, it’s comforting to have expectations. We’re thrown off-balance this week because Episode Five covers two days: the Ace/Gus discussion is at midpoint and Pint of Plain’s racing debut is at the near end. It’s hardly an harmful alteration, because by breaking from convention, albeit one with minimal history, we take stock in the ways each character reveals his capacity for attachment and companionship: my key words for this week.

It would seem odd for most of these men, who are perpetually seeking reward, redemption or even revenge, to ground themselves in the present. Past failures and future prospects drive them forward, committing them only to their next paycheck or tomorrow’s race. And while life’s natural mystique is still encapsulated in yet another mesmerizing race sequence, we see most of our major players seeking, whether admittedly or not, the company of others to give their lives meaning.

Ace (who Dustin Hoffman continues to inhabit with a soothing yet dynamic charm), for instance, becomes fidgety and testy when Claire of the Thoroughbred Retirement Foundation doesn’t show to pick up her check. Gus tries to ease Ace’s mind by making any number of excuses for her. Ace initially becomes defensive, “What are you her lawyer?” but then he smilies as the scenarios become more implausible. It’s difficult to stay mad at “The Greek” when he is pseudo-philophizing about how the great men of history, Babe Ruth and General Patton, are dead, but they are here, alive. The sentiment is rife with implications of how greatness only comes who does who act, but coming from Gus it gives off the air of nighttime rambling, which is fine with me. Every time those two converse before bed, there’s always a nugget you take away. Whether it’s a reveal of Ace’s character, or a quotable perspective with which to view the preceding (or in this case also the following) events, their interplay always enriches the episode.

The next morning she does show up, and the giddy anxiety that overcomes him when Gus says she is on her way up is adorable. I’m impressed with the decision to give Ace a crush as opposed to depicting him as a ladykiller. With the influence he has, I’m sure he could buy the affection of many breathtaking women, but not every gangster, especially the aged ones, can be a womanizer. His understated displays of generosity and almost reserved courtship are refreshing. When he asks Claire to attend Pint’s race, it seems like a legitimate invitation to accompany him, to spend time, and not a precursor to a romp in the hay (which could be literal on this show, so I should be careful with what I say).

However, Ace ends up sleeping outside Pint Of Plain’s stall, and Gus drives Claire home once night falls. When Pint of Plain’s right hind leg is sliced by a renegade horseshoe, Ace insists he accompany the horse through the night. The results of an X-ray and ultrasound in the morning would shed light on his condition, but Ace is more concerned about comforting the animal that had enchanted him from the second he kicked up dirt. When he pets and kisses Pint’s muzzle after the horse had nudged him awake, you wonder why he is so receptive of him and so shy with Claire? Yes, he spent three years imprisoned, but what makes Pint easier to relate to? Perhaps, because a horse won’t reject him.

Marcus, our sailor-mouth momma hen of the degenerate gamblers, begins the episode in rare form. He harps on Jerry for his habitual gambling and when the security guard Kagel visits their motel room he verbally assaults him about his obesity. Turns out that bitterness stems from his fear that he’s dying. Upon a visit to his chest doctor, he’s assured he should have at least five years left (but the doc won’t give him 15). What is intensifying his coughing fits is stress. The doc suggests he find someone to talk to and Marcus replies that he has a horse. Again, why is it so much easier to project emotional need on to these animals? Sure with their innocence and their evident majesty it’s easy to become attached, but why not one of his pals? This is answered with a Valium-induced admission to Jerry that he thinks he might be “queer for him.”

Some might characterize their discussion as homophobic due to the derogatory terms that fly around, but Milch is more concerned with sincerity than sensitivity. It’s likely that these men would stigmatize homosexuality, and it’s also likely that as a disabled person, Marcus may have never had a real buddy due to always taking care of himself. His confusion of sexual attraction and concern for Jerry’s mental health is farfetched for sure, but the heartwarming honesty adds authenticity to it. The usage of slurs may have been gratuitous and even made me squirm a bit, but what I took out is that intimate male friendships are dignified and have tremendous value and need not be trivialized as a “bromance.”

As mentioned, Joey is also fleshed out tonight through his attachments, or lack thereof. He receives the scorn of his only remaining jockey, (Ronnie hired another agent after his injury) Leon, because Escalante chooses another jockey for Pint at Ace’s behest. To be fair, Escalante was only using Leon (a “bug” or apprentice) because it would increase the odds. After misleading Ace, telling him that there was a 90% chance he’d scratch his horse, Ace decided he wouldn’t tolerate Escalante’s gambling superseding his duty as trainer. Ace then politely handed Escalante $5,000 to give Leon and to replace him with a veteran so that Pint had his best shot. This move of course, makes Joey look horrendous as an agent, despite a loose promise from Escalante that Leon could ride Mon Gateau when he’s ready to race again.

Buried under his own self-pity, Joey attempts to claw his way out by calling his ex-wife Lynn. He gets her voicemail three times and each time his lip quivers a little more, inching towards meltdown. Putting his moves as an agent in this context, it shifts your entire understanding of the character. Once an SOB, he becomes a miserable slouch with only his job to keep him warm at night. Knowing that he hasn’t completely chosen this life, makes his station all the more tragic. With only the success of his clients validating his ego, it’s no wonder why he needs to fill the emptiness with booze, and contradict himself by denigrating Ronnie’s alcoholism and pain. He hates himself, but he takes it out on his struggling-to-make-weight “bug” Leon, and his addiction-riddled old hat. How better to deal with your own misery than to projecting it onto others? But now, with Lynn ignoring his calls, he can’t avoid the truth of his isolation.

The images of companionship and the feeble searchers of it are striking in this fifth episode. I can’t stress enough how choked up I was when Dustin Hoffman stroked Pint with such gentility of spirit. On a minor scale, it was also pleasant to see that Escalante and Jo slept in the stables, all snuggled up. A relationship that began mechanically, “Do you wanna do it?” has now developed into something sweet over the past two weeks. But the most enthralling images captured in this series will always be in the races. I mean, I thought last week was the pinnacle of motion photography. That’s not to say this week is definitively better, because this scene was filmed altogether different. Last week, the race speed was slowed down to a crawl, interspersed with lingering reaction shots that heightened the urgency and added emotional weight. This week was more frantic. The race speed was much closer to the realistic breakneck speed. The only reactions are the gasps from Ace and Escalante as they witness the injury and the subsequent improbable finish. Whereas last week, my mouth was agape at the fluidity of Gettin’ Up’s movement, this week the pace and the closeness of the angles achieved a rattling effect that made me feel like the horse was actually falling off at the hinges. Though it still possessed its own type of gorgeousness, the intention here was to unsettle instead of astound.

The thematic unity continues to impress me, and while we depart slightly from the established format, it warrants its deviation when you can sign off with such a painfully compassionate moment. There was a noticeable lack of Walter and Rosie though, (who besides Ace have become my favorites to root for) but I can’t fault them for wanting to give other characters a spotlight as we approach the point of no return, when we’ll need to decide where we’ll place our allegiance. So for cementing itself as an apt portrait of the value of attachment and companionship, even in the lives of reckless and greed-driven men, and for offering an empathetic, humanistic lens with which to view the more insufferable characters like Marcus and Joey, I’m willing to make myself vulnerable by committing: to an A-.