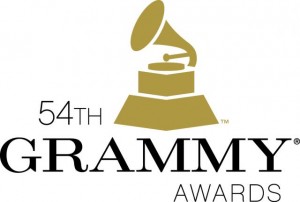 To honor Grammy-Award winning singer Whitney Houston, who died yesterday, Jennifer Hudson is expected to sing a medley of her hits. Alicia Keys and Bonnie Raitt will  pay tribute to Etta James.

8:00 p.m. Bruce Springsteen and the E Street Band open the show. Bruce asks: “America, are you alive out there?”

8:07 p.m. A clip of Whitney Houston singing her hit song “I Will Always Love You” is played.

8:11 p.m. Bruno Mars performs in the style of James Brown. 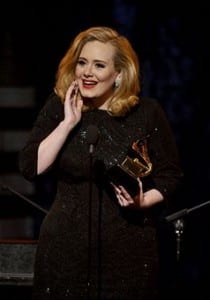 Adele accepts her first Grammy of the night

8:24 p.m. The first award of the night for Best Pop Solo Performance goes to Adele for “Someone Like You.”

8:36 p.m. Fergie  and Marc Anthony announce Jay-Z and Kanye West as the winners of the Best Rap Performance category for their song “Otis.” Both rappers are not in attendance.

9:12 p.m. The Grammy for Best Rock Performance goes to Foo Fighters for “Walk.” Lead singer Dave Grohl said they made the record in his garage with a microphone and tape recorder.

9:16 p.m. Maroon 5 leads the celebration of the Beach Boys with “Surfer Girl.” Foster the People sings the next song “Wouldn’t It Be Nice.”

9:21 p.m. The Beach Boys reunite on their 50th anniversary and sing “Good Vibrations.” Maroon 5 and Foster the People join for the second half of the song.

9:30 p.m. This year’s Trustees Awards were given to Dave  Bartholomew, Steve Jobs and Rudy Van Gelder.

9:31 p.m. Stevie Wonder receives a standing ovation as he comes out to announce the next performer. Plays harmonica and sings as he introduces Paul McCartney.

9:32 p.m. Paul McCartney sings “My Valentine” sitting on a stool with an orchestra playing behind him.

9:38 p.m. The Civil Wars come out and say “We would like to thank all of our opening acts.” Jokes!

9:40 p.m. Taylor Swift embraces her country side while performing “Mean.” She plays a banjo and dresses like she is in “Little House on the Prairie.”

9:50 p.m. Neil Patrick Harris presents the Grammy for Best Song of the Year to Adele Adkins and Paul Epworth for “Rolling in Deep.” That was definitely one award most will agree on.

9:57 p.m. Best Country Album is awarded to Lady Antebellum for “Own the Night.”

10:05 p.m. Adele begins her much anticipated performance singing “Rolling in the Deep.” So effortless and beautiful. We are all glad her voice is back. The show allows time for the standing ovation to go uninterrupted.

10:30 p.m. Carrie Underwood asks Tony Bennett to join her on stage to sing the duet “It Had To Be You.”

10:33 p.m.  The Grammy for Best New Artist goes to Bon Iver. He is so tall! The mic is definitely too low for him. 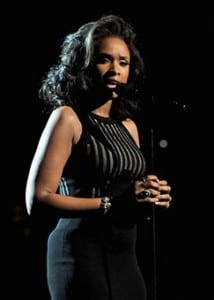 Jennifer Hudson sings "I Will Always Love You" without crying

10:42 p.m. Jennifer Hudson sings “I Will Always Love You” in tribute to Whitney Houston. Such a sentimental performance. She ends with “Whitney, we love you.”

11:04 p.m. Drake introduces Nicki Minaj and calls her “intelligent, beautiful and driven.” Nicki titles her performance “The Exorcism of the Roman” and begins with a video parody of “The Exorcist.” She truly puts on a show while singing her song “Roman Holiday.”

11:10 p.m. Lady Antebellum presents the Grammy for Record of the Year to Adele for “Rolling in the Deep.” No surprise there!

11:18 p.m. Diana Ross joins LL Cool J to announce Album of the Year. The Grammy goes to Adele for “21.” She cries as she gives her thank you speech. Said the album was inspired by a “rubbish relationship.” Adele really cleaned up tonight but her wins were certainly well deserved.

11:23 p.m. Paul McCartney closes out the show with “Carry that Weight” and “The Love We Make.”