The filmmakers took a break between shots to adjust the camera and lighting for the next take. As they reviewed the previous shots, their star received a make-up touch-up. The bright lights were causing his white face paint and green hair dye to run.

When they were ready to resume, the actor once again repeated his lines, strutting around in his green vest and purple suit, flicking his tongue out over his lips in an awkward habit.

The filmmakers cut the scene and congratulated each other on the success. They were filming a new Batman movie that took place two months after the conclusion of July’s blockbuster, “The Dark Knight.” It was their first filming session, and the groups of filmmakers were making great progress.

Their star went to drink some water between takes and was greeted by the owner of the house they were filming in. “Nice makeup,” she said.

They were not on a sound stage or the lot of a billion-dollar production. The actor playing The Joker was not a Hollywood prima donna but mild-mannered 21-year-old Craig Deering of Illinois.

The house’s owner was Deering’s best friend and fellow film maker Allen Murphy’s great aunt Mary’s. While watching the filming, she told her nephew that while she always supported the arts and was glad to help, she had not expected college students running around her house dressed as Batman and an evil clown.

“She watched a little bit through a window and like peered in a couple time, and I think she might have freaked out a little bit,” said Deering.

“In my family, she should have known better,” Murphy, 20, joked. 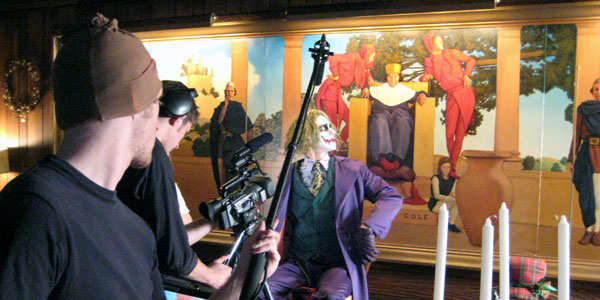 With their initial success tucked away, the guys decided to venture into feature-length territory. (Photo by Dan Drake)

Deering and the rest of the filmmakers are part of Evil Iguana Productions. The group creates and posts their films on YouTube and suddenly blew up when they spoofed “The Dark Knight” trailer in the summer.

The filmmakers are a bunch of college kids who have been making movies together since high school with nothing but Deering’s father’s video camera and some editing software.

It wasn’t until July when the group released “The Dark Knight” spoof that they became stars. In the four months since its release, the video has received over 5 million views. Their new Batman movie is a follow-up to their spoof of “The Dark Knight” trailer that they released in July.

“I am like really happy that it is getting that good of reviews and like people are still watching because, honestly, when we were making it, and we were about to release it, I was so scared to release that video because I thought we were going to get shot down,” said Deering sitting down to chat with Blast recently. “(I thought) everyone was going to yell at us for like trying to spoof Batman and telling us it was crap, and I was expecting to take it down. But, all the positive feedback and stuff is great.”

Deering is the director and editor of all of the Evil Iguana videos, and also came up with the ideas for the “The Dark Knight” spoof, as well as the mockeries they made of “Twilight” and “The Number 23.”

After the success of their Batman spoof, Deering and the rest of Evil Iguana decided to venture into unknown territory — a 30 to 45 minute serious film about the Joker, set in Christopher Nolan’s Batman universe.

Deering said that making the drama was a challenge and a big change from their previous work.

“This is like by far the most professional we’ve been with a movie, which I thought was really cool, because usually we just get our camera and improvise a lot of stuff,” said Deering.

“I was a total nerd (in middle school): big glasses, comb over. ‚ I think my graduating class was like 21, it was really small. I tried my best to fit in with the rest of the class, though‚ I was never considered one of the “cool” guys, but it was alright,” said Deering.

Today, Deering has people requesting to be his friend on Facebook whom he has never met but feel they know him through his Youtube series, “The Allen and Craig Show,” and his various film spoofs.