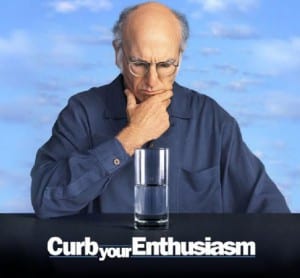 Only two shows of note tonight: “Crash” premieres on Starz at 10, and “Eureka’s” finale is on SyFy (still not used to spelling it that way) at 9.

On Sunday, HBO restarts “Curb Your Enthusiasm” at 9 p.m. The popular show from the “Seinfeld” people is back. CBS is also airing the Emmy Awards at 8 p.m. Sunday.

Spike TV’s 10th season premiere of “The Ultimate Fighter” on Wednesday is the most watched episode of the fighting series ever, and the most watched original show ever on the Spike TV Network, drawing g4.1 million total viewers — almost wholly male, according to Nielsen.

The History Channel had some success with its “MysteryQuest” series, which also premiered Wednesday, drawing 1.2 million watchers.