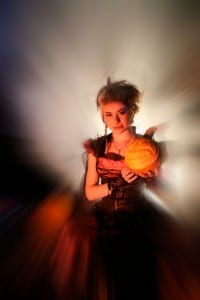 “I just found a piece of hair in my pizza, but I am going to pretend that it was mine because I really, REALLY love this pizza.”

You can easily notice Siobhan Magnus’s laid back personality in almost every aspect in her life, even when it comes to: pizza. Siobhan’s interview took place at a restaurant of her choice, California Pizza Kitchen. It’s not difficult to understand her love for pizza

Her best friend Brittany Whittman didn’t seem surprised at all and it was almost impossible to suppress laughter. Along with her love for pizza, Siobhan’s love for music is undying.

Words such as unique, different, or even individualistic do not come close to being able to describe the personality and style of Siobhan Magnus. From her taste in music to her choice of style, this Cape Cod finalist is quite timeless.

Trying out for American Idol was something that briefly crossed Siobhan’s mind. While at lunch when I first asked her about where the initial idea to tryout came from, best friend Whittman started laughing. “I told her not to do it,” said Whittman.

To any bystander, Whittman’s comment could be completely shocking, but looking back at our lunch date I become more shocked with the idea that Siobhan was part of American Idol in the first place. That statement isn’t meant as an insult at all. After anyone has had any interaction with Siobhan, they would have a similar reaction as well.

Quite frankly, she isn’t your typical pop star. Actually, it would be completely absurd to even put her name and pop star into the same sentence.

Pop stars adapt to new trends and do whatever is necessary to get their music out on the radio. They dress how they are told to dress, and sing what is written for them to sing. Pop stars are simply sell outs. That is why Siobhan will never fit that category.

Auto tune will never replace her soulful voice. Her music takes on the rock, blues, and soul genre. But for her, it’s a lot more. “I would describe it as storytelling music,” said Siobhan.

Musical talent is something that’s run in Siobhan’s blood. “My father is a musician. Once he found out that I was actually good at music and wanted to pursue it he sat me down and said ‘If you want this, we need to find ways to make you better,” explained Siobhan. She became involved in every musical class or group available at her high school and even performed in theater.

She spoke of eventually dipping her feet into acting. Her love for music also coincides with theater. Siobhan spoke about being exposed to theater at a young age because her older siblings were involved, and they always used her as an extra.

Siobhan was accepted at Salem State College, but eventually dropped out and starting working as an apprentice glassblower. However, one of her older brother’s knew she was meant for something much bigger. He made a deal with her.

He gave her a lock box that had a slot in it. In the box was a ticket to Nashville. “He told me that if I was able to put two hundred dollars in this box then he would give me the key to it,” said Siobhan. It didn’t take too long for her to accumulate the money.

While in Nashville is when Siobhan got the call about American Idol tryouts. “My friend and I made a deal that if they ever came to Boston we would go and try out.” The call was good timing. Her grandmother was starting to get worried about her in Nashville and constantly asked when she would be back.

“I got back the night before the audition,” said Siobhan. My initial reaction was: so wait, when did you have time to prepare?

Footage of girls explaining their preparation for their American Idol audition can be found anywhere on the internet. Some spent months taking vocal lessons others spent entire days rehearsing. It’s all very extreme.

Siobhan , let’s just say, took an entirely different approach. When I asked her about her rehearsing schedule she said, “I chose my song fifteen minutes before I was going to audition.” I think that perfectly depicts her personality.

Even though she had somewhere to be after lunch, it was never rushed. There was always something new to speak about and it was always laid back with a mixture of laughter.

She could have easily sounded annoyed when she explained her miserable car ride on her way to auditions. “More than half way there we have to turn around because I forgot everything I needed,” said Siobhan. She left all her forms of identification that she needed in order to audition.

To make matters worse, she also received a speeding ticket. While reiterating this story she laughed the entire time; not one complaint.

Her new single, Black Doll, is currently available on iTunes. “Black doll is half a homage to Edward Gorey and the other half is making that connection between myself and Gorey; talking about how everyone feels out of place sometimes, but there is nothing wrong with that. My favorite thing about the song is the allusion to things only my family will get. That line about the “purple house,” is the house I grew up in, my house is the only purple one and is kind of a landmark in my neighborhood,” said Siobhan.

Edward Gorey is one of the reasons as to why Siobhan gained more publicity. She not only shows her artistic nature through her music, but also through the tattoos that she has on her body. One night on American Idol, one of her tattoos were showing. Her tattoo is a tribute to Edward Gorey. Her manager saw this while he was in a bar and instantly tried to get in contact with her.

“His people were trying to get in touch with my people,” said Siobhan.

Since American Idol, Siobhan has been working on her debut album. She has released two singles. Siobhan has also been seen on The Ellen Degeneres Show and The Late Show with David Letterman. She was part of the American Idols LIVE! Tour 2010. She has also sang the national anthem at Fenway before a Red Sox game.

Siobhan made her solo debut at the Wilbur Theatre on Oct. 30. At her show, “Hallowe’en Dreams,” she introduced her new album, “Moon baby.”