Electronic Arts had a busy week as we have reported, and reported and reported, but three more game announcements are worth taking note of.

First off, EA Sports announced Thursday that NCAA Football 09 will be the first college football title on the Nintendo Wii when it hits shelves later this year. It will join the PSP, PS2, PS3, Xbox 360 and most likely PC/Windows platforms.

With the announcement comes a contest — fans can vote on their favorite college mascot that will grace the game’s cover.

"Nintendo is excited to have NCAA Football 09 available for Wii.  In my family, NCAA Football has always been a family event," said Steve Singer, Nintendo of America’s vice president of Licensing.  "Now with the Family Play mode from EA we can share the football experience all year long."

Voting for the cover mascot cloes March 6, and the winner will be announced March 14. 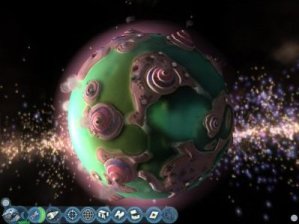 EA’s highly successful Sims maker Maxis will launch their new game, Spore, on the PC, Macintosh, Nintendo DS, and mobile phones on the weekend of September 7.

Taking their city building simulations to the next level, Maxis promises that Spore “gives players their own personal universe in a box.”

“Create and evolve life, establish tribes, build civilizations, sculpt entire worlds and explore a universe created by other gamers,” EA/Maxis said Tuesday. “Spore gives players a wealth of creative tools to customize nearly every aspect of their universe: creatures, vehicles, buildings, and even UFOs.  Players can then seamlessly share their creations with the world or explore infinite new galaxies created by other gamers.”

“The wait is almost over,” said Maxis Chief Designer Will Wright. “We’re in our final stages of testing and polish with Spore, and the team at Maxis can’t wait to see the cosmos of content created by the community later this year.”

Finally, Mass Effect will hit the PC platform in May. The Bioware-produced action epic has found critical acclaim on Xbox 360.

“Published by EA and re-designed for the PC, Mass Effect invites players to take the role of Commander Shepard as they set out on an adventure to save the galaxy from imminent destruction,” EA/Bioware said Tuesday. “Wrought with treachery, heroism, difficult decisions and a universe filled with unique and colorful species, Mass Effect delivers a truly compelling storyline.”