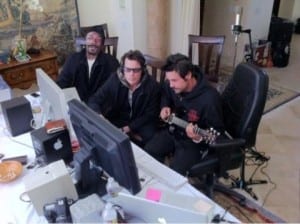 NEW YORK — The public got curious when Charlie Sheen tweeted a picture of himself working on some music with Rob Patterson and Snoop Dogg. The picture, with no details only, showed Sheen, Patterson, and Snoop sitting together.

Guitarist Rob Patterson has been enjoying his unique journey in the music industry. He is known as a guitarist for Filter, whose latest album is “The Trouble with Angels,” but he just joined the band last year. He has also played with Otep and Korn. Patterson is also known for doing DJ shows while playing guitar.

We might get to see a new side of Patterson in his up-coming tour — Charlie Sheen’s sold out “My Violent Torpedo of Truth/Defeat is Not an Option” tour, which will kick off on April 2. Before going on the road, Blast got a chance to chat with him about what he’s been up to.

BLAST: You joined Filter last year. How’s it been playing with them?

ROB PATTERSON: It’s been really exciting, fun, and, you know, I’ve been a Filter fan since when they first came out. And, they and I been friends for, you know, a number of years, like 5 or 6 years, and, you know, which is kind of, so [that] happened [because] we wanted to work each other and we both were willing to do that. So, it’s been really great.

BLAST: What did you bring to the band?

RP: I think that I come from more of a heavy guitar kind of that background. I mean, some of the bands I’ve been in, like the band that I started [called] Otep back in 2000, um, super heavy. And then, I’ve been in Korn for a few years, which obviously, you know, really, playing with those guys had a lot to, you know, [playing with them has] been influenced me a lot. So, I think, I bring kind of a heavier chunkier aspect to Filter.

BLAST: Filter will go on a tour in Europe in June. Are you excited?

RP: Oh yeah! I love touring Europe. It’s like one of my favorite things to do. I think that’s a favorite thing to do in a band, especially like, the cultures, architecture — really great. I’m really looking forward to it.

BLAST: What has been your main music influence?

RP: Um, well, let’s talk about the shit. Um, well, as I was growing up, I was really into classic rock. I don’t know if it was called classic back then but it is now. Um, I was really into the bands like Led Zeppelin, The Doors, Pink Floyd, and as soon as I started playing guitar, I started really getting into like Van Halen, um, you know, the bands or stuff like that. I started getting into like heavier rock bands. Van Halen is, you know, one of my favorites. Eddie Van Halen is probably like my biggest influence.

BLAST: You are the Musical Director for Charlie Sheen’s tour “My Violent Torpedo of Truth/ Defeat Is Not an Option,” which will start on April 2. What’s this tour all about?

RP: Well, I can’t talk too much about that, but I can tell you that it’s going to be extremely entertaining. It’s going to be stimulating. It’s going to be very, um, smart? It’s going to be music interlaced [with music] that I wrote, throughout the show. Um, you know, Charlie is pretty much the funniest man that I know. And, he wants to get his truth out to the public. And, it’s up here. And, the public wants to hear it. So, I just think it’s a great opportunity for me, you know. I am extremely grateful for the job and, you know, it’s an interesting gig! You know, we’ve all been working extremely hard over the last couple of weeks and put this altogether. And, I do not think anyone is going to be disappointed.

BLAST: The first show is sold out. The tickets were gone in 15 minutes.

RP: Yeah, it’s crazy. I don’t know if we are playing in Boston, but I’m from Boston.

BLAST: Is Charlie Sheen singing with your guitar performance at shows?

RP: Ahhh, I am not gonna give that away! It’s for the people who would be at the show and I guess it’s, kind of, all surprise, really. Everything is, kind of, under, you know, kind of a top secret right now as far as the content of the show.

I can say that I’m playing guitar at the show.

BLAST: You are also working on what looks like a song or other music project with Sheen and Snoop Dogg. How did it all start?

RP: Um, well, we wanted to do a song for the soundtrack for the tour. And, I just thought that Snoop would be a great person to, you know, add to our ensemble of people. And, you know, I reached out to him and he immediately was very excited about it, which (the collaboration) kind of happened from there. And, you know, I wrote a bunch of music, you know, a bunch of tracks for him to do his thing on, and he did a thing on it. So, I think it’s gonna be really great.

BLAST: Is this serious business or fun stuff?

RP: Well, you know what, I personally think that music in general should be really fun first and then, business second. So, I don’t really think of it in the business aspect of it because that would really narrow my field of thinking when it comes to writing music. So I just think it’s something to do for fun and, you know, I don’t know who said it but they said, “If there is something you love to do or work, then don’t be like you are ever working.” That’s kind of my motto. I do everything in music, you know, for fun. If it’s not fun, then what’s the point? You know?

BLAST: When can we get to listen to the music?

You know, I don’t know. Everything is happening so quickly with all of it. And, it’s kind of like a guerrilla style, you know. Everything is that way. Recording, experience, and everything is, kind of like, happening everyday, and something new is going on. It will be soon! It will definitely be soon. When I read that on a social media site, a lot of people are very highly anticipated [to listen to] the song, which, you know, obviously, is definitely pressure on me but yeah, that will be soon. I can’t give you an exact date, though.

BLAST: Is it finished?

RP: That I can’t answer. I think it’s happening all the time. It’s a work in progress right now.

BLAST: Is Snoop Dogg joining you guys for the tour?

RP: The answer for that question is, “Go to a show and find out!” I can neither confirm nor deny that!

BLAST: I heard you’ve been teaching Charlie Sheen how to play guitar. Is that true?

RP: I’ve been teaching his girl Natty (Natalie Kenly) how to play guitar.

BLAST: Is she good?

RP: She is really good. She is one of my best students I’ve ever got, actually. She really takes it seriously. She cut her nails! I didn’t even ask her to! Most girls, you know, refuse to cut their nails. It’s a problem when you start playing guitar. But Natty, after I first met her, I didn’t even ask her, but next week, she came back and cut her nails really short. I was like, “Wow!” So, she really takes it seriously and she is really good.

BLAST: Charlie Sheen has been getting so much attention this year in every way. Can you tell us what kind of person he really is?

RP: Charlie is a wonderful, generous, smart, funny, and kind person. He is a family man. He is a very good friend, not [only] just [with] me but with all [his] friends. He is just a really great guy!

BLAST: Can I get some message form you to all the people who are going to see your shows with Charlie Sheen?

RP: Ah, OK, I’ll say, for all people who are coming to our show, people can have your mind blown. And, you know, be prepared to experience Charlie and hear stuff from him that you won’t get anywhere else. And, you know, it will definitely give you something to think about.

“My Violent Torpedo of Truth/Defeat is Not an Option” hits Radio City Music Hall on April 8, the Oakdale in Wallingford, Conn., on April 9, back to Radio City on April 10, before hitting up Agganis Arena in Boston April 12.

The tour hits the St. Pete Times Union in Tampa Bay on April 22 and the BankAtlantic Center in Ft. Lauderdale April 23.

For Blast West and Southwest readers, the tour hits the American Airlines Center in Dallas on April 7, Wells Fargo Theatre in Denver on April 28, Nob Hill Masonic Auditorium in San Francisco on April 30, and the Comcast Arena in Seattle May 3.