There is an old saying about movies (any work of art, really): if the film stays with you and you are thinking about it days later, it has succeeded. But I always thought this aphorism too pat. There is something that makes a lasting impact on you and then something that confuses you, so much so you are still trying to understand it long after you have left the theater. 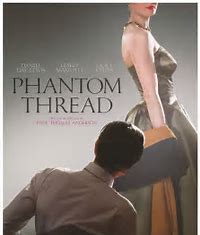 The newest collaboration between actor Daniel Day-Lewis and director Paul Thomas Anderson, titled Phantom Thread, is a film which I am not sure is masterful or simply too hard to penetrate. The rubric promises a mysterious journey, but the story and most everything about the movie is elusive, and it’s unclear to me whether this is intentional or not—thus my conundrum.

Anderson’s film depicts Day-Lewis playing fictional dress maker Reynolds Woodcock, a virtuoso in the London and international fashion scene of the 1950s. He is also a loon, and in some of the opening scenes, I thought he might be more Buffalo Bill –about to make a dress of human skin— than simply an inspired genius with an untreated pathology.

I am not sure there was any particular real person upon which Woodcock was based, but the character certainly fits the mold of the brilliant narcissist who is tolerated only because he can give important people something they want. Mozart’s depiction in Amadeus springs to mind by way of comparison, and playing Woodcock’s Salieri, so to speak, is a young ingénue named Alma, on whom Woodcock has his eye to be his next model, muse, and lover.

Unlike Amadeus, the world of Reynolds Woodcock is controlled, cloistered, and cold, and Alma, played by Vicky Krieps, at first struggles to fit in. She has Woodcock himself to deal with on top of his overbearing and managerial sister Cyrill, who acts as evil stepmother and pimp rolled into one.

Woodcock’s need to shuffle paramours in and out of his life also reminded me of Martin Scorsese’s brilliant short film Life Lessons, in which Nick Nolte plays a similar disturbed and muse-starved artist. When in need of inspiration, Nolte’s character would court and bed an up and comer who wanted to be proximate to his genius. Soon enough, however, the character’s obsessiveness and peculiarity would drive the young woman away, and he would then seek out his next muse (er, victim).

Anderson is clearly a Scorsese fan so this parallel cannot be ignored, but what happens differently in Phantom Thread is that Alma, the hunted, turns the tables on Woodcock and, Salieri-like, is able to cajole herself closer to the master by way of manipulating him through physical and psychic pain. Unlike Salieri, however, Alma is not jealous of Woodcock’s talent but only wants to be closer to him and to avoid the eventual exile he imposes on every woman who comes into his orbit in such a fashion. She wants to be more than a woman who wears his dresses but inside his skin, his mind, and his heart.

Thus, the film has as a strange structure. Its first half concentrates on introducing us to this odd personality, while the second half becomes a battle of wills, not unlike Burton and Taylor in Who’s Afraid of Virgina Woolf?

And this is where my confusion arose, for I could not pinpoint the dramatic purpose of the film. Since Woodcock is a fictional character, the film doesn’t quite fit the mold of Amadeus, which delved into the tragi-comic side of one of the world’s great composers. Yet Phantom Thread clearly uses a patina of reality to present a figure who most surely could have existed.

So is the film a comment on the fashion industry? The decadence of the royal class? This period in English and European life? Is it meant to highlight the heights and depths to which an artistic genius can drive himself and those around him? And the domestic side of the film; what is that meant to tease out? Though the film is set in London and the English countryside, the two main characters both have vague and undesignated European accents. As they snipe at one another and perform a dance macabre, are we meant to think they are both fish out of water destined to be drawn to one another yet also repelled by subcutaneous impulses they can only actualize at the film’s conclusion?

This is of course speculation, but is Paul Thomas Anderson attempting to move as far away as he can from the porn business? So far, in fact, that he has landed in 1950s England, where an arched eyebrow and the occasionally uttered “fuck” in conversation is the most lubricious thing to be seen or heard? Boogie Nights was filthy and There Will Be Blood (his other collaboration with Daniel Day-Lewis) was dirty in its own way, as it dealt with the ethics and the grit of the nascent oil industry in America, but in Phantom Thread the vulgarity is entirely interior.

Anderson made many other films between Boogie Nights and Phantom Thread (The Master most notably), but perhaps there is something personal at work with him and Phantom Thread; perhaps it is an expression of his own maturation. That is, I mean to ask, what can get more distant from the immaturity of Boogie Nights than a film about proper English people who make dresses for debutante balls and royal weddings (even if their personal lives are dysfunctional)?

But if I am to offer a close, textual reading of Phantom Thread and set aside guessed-at motivations for making this film, I struggle to find a compelling interpretation. Stylistically, Anderson seems to be channeling Godard at times with halting car rides through the English countryside. At others, he is fixated on close ups and painting cinematic tableaus. In this sense, Phantom Thread conveys the feeling it may be a mood piece and a character study only, and any actual story is unimportant. So while there are many great moments in the film its overall narrative is abstruse, and perhaps that is just as well.

Daniel Day-Lewis is at his best (has he ever been anything but at his best?) as Woodcock, and he will certainly receive an Oscar nomination for the role. His opposite, Vicky Krieps, is also deserving of Oscar consideration, and Phantom Thread is certainly a fine film. But, like Day-Lewis’s buttoned-up character, I cannot give voice to my true feelings on the matter. Woodcock can sew like a master and produce the most outwardly gorgeous clothes on Earth, but inside the thread of his life is unspooling. These are the emotions I felt personally at the conclusion of the film, but I am not sure if I was meant to be lead in that direction or that is just where I landed after the exhaustion of watching these characters try to achieve professional and emotional beauty.

If the intent of the film was to leave me frustrated and still attempting to unwind it days later then it has achieved its purpose, but I am not ready to anoint it a masterpiece because of that.