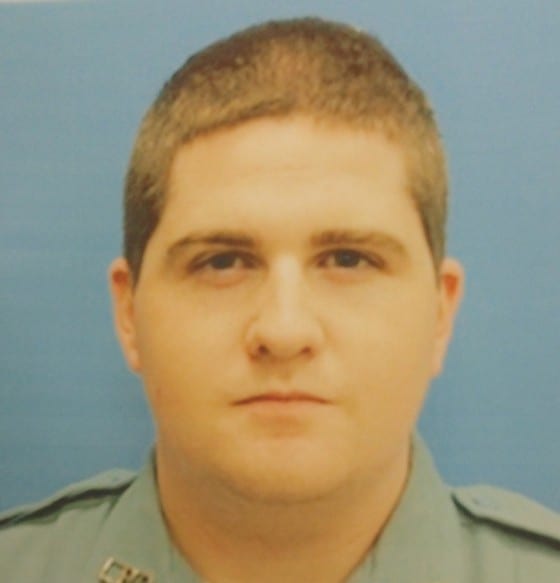 In the moments after Dzokhar and Tamerlan Tsarnaev murdered MIT police officer Sean Collier, a graduate student rode his bike past Collier’s cruiser and noticed a strange silhouette leaning into the open driver’s side door. The silhouette, startled, jerked upright—and locked eyes with the biker.

Nate Harman, a 24-year-old mathematics student, told this story publicly for the first time Wednesday at John Joseph Moakley Courthouse, testifying in the ongoing United States vs. Dzokhar A. Tsarnaev case. Tsarnaev is on trial for charges related to the 2013 Boston Marathon bombings that killed three people and the subsequent shooting of Collier.

His hand shaking at one point as he poured a glass of water, Harman told the court he had initially thought nothing of the incident.

“I just laughed, actually,” said Harman, surprised that he had spooked the mystery figure merely by pedaling behind him.

It was only later that Harman realized the full gravity of what—and who—he had seen.

When asked by prosecutor Bill Weinreb if he’d seen the person whose startled gaze he had met two years ago, Harman pointed at the defendant seated 15 feet in front of him.

“He’s right there,” said Harman as Tsarnaev leaned forward, almost obligingly. “He has a blue shirt on.”

Radio calls, surveillance tapes and the witnesses’ collective memories, shared with the courtroom on Wednesday, illustrated the events that took place that Thursday night in April.

Collier’s work began at 3:15 p.m. with roll call, said MIT officer David Sacco, who worked dispatch for the department that night. The two men were often on duty together for the 3-11 p.m. shift. 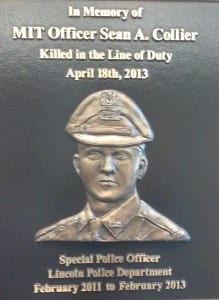 “I knew him since he was hired,” Sacco testified. “I got to know him real well.”

DiFava hired Collier in January 2012, after Collier graduated from municipal police officer training at the MBTA Transit Police Academy. Before joining the MIT department, Collier was a special officer for the Lincoln police department for two years beginning in February, 2011. He also worked as a summer officer for the Hull police department from 2008 to 2010 and as an information technology civilian employee for the Somerville police.

According to former bosses, colleagues and friends, Collier’s perseverance and work ethic represented his long-held desire to be a police officer.

“He was very reliable, very dependable,” said Lincoln police Chief Kevin Kennedy Thursday. “He clearly wanted to help people, and you could tell it.”

Collier’s role in MIT’s department, Kennedy said, was a job he held with pride and performed with enthusiasm.

After 3:15 roll call on April 18, Collier began patrolling his assigned sector by cruiser. The evening and beginning of the night passed uneventfully. At one point, Sacco and Collier exchanged a series of text messages about a woman who was upset that her car had been towed.

DiFava left the police department after 9 p.m. Driving home, he saw Collier’s black and white cruiser, emblazoned with “MIT Police,” on Vassar Street, at the edge of campus.

DiFava stopped to chat for a few minutes before continuing toward home. As he recounted the last words he said to Collier, many people in the courtroom were visibly affected by his testimony and tone of voice.

His parting advice to Collier: “Be safe.”

Sometime after DiFava left, around 10:20, Henniger was returning to the station from his patrol. As he rolled down Main Street, he spied Collier parked between MIT’s Koch Institute and Stata Center, near the corner of Vassar and Main. Henniger, a veteran police officer who graduated from the Quincy police academy in 1974, served as mentor, guide and father figure to MIT’s young officers, including Collier, a member of his squad.

Noting nothing at all unusual, the sergeant acknowledged Collier and kept driving. He reached his destination five minutes later—where he walked in to find Sacco attempting to reach Collier by radio and, when that failed, phone. Sacco had received a radio call from another patrolman, who thought he might have heard gunshots. But maybe, the officer reported to Sacco, they were just loud drums.

Surveillance video captured from the roof of a building across from the Koch Institute and shown to the court on Wednesday revealed what had happened in those five fateful minutes.

At 10:23, Dzokhar and Tamerlan Tsarnaev strode off of Ames Street and walked down a path in front of the Koch Institute towards the intersection of Vassar and Main. As they approached the corner and Collier’s cruiser, their walking gaits changed to slinking. They crept up to the cruiser, one on each side of the car.

At 10:24, they reached the front doors. Suddenly, the surveillance tape lit up with red as the car’s brake lights went on.

Their harsh glare signaled that in that instant, one of the men had shot Collier in the head.

According to Nate Harman’s testimony, Dzokhar Tsarnaev then thrust an arm through the driver’s side window, opened the door and leaned in to try to take Collier’s gun, an attempt DiFava and Henniger said was thwarted by the locking system of the holster used by MIT police.

Meanwhile, Harman had finished up a long day working on problem sets in his office and set out on his bike for home. At 10:25, the video showed, Harman streaked behind Dzokhar, five or six feet away.

“He snapped up and turned around,” Harman said. “He looked startled.”

Then he rode off, not thinking anything was particularly unusual or alarmingly, not noticing that Collier was bleeding profusely from gunshot wounds.

Less than a minute later, the Tsarnaev brothers ran back to their car on Ames Street, having failed to steal the gun of the man they’d shot.

Back at the police station, Sacco was still waiting to hear from Collier.

“It became an amount of time that wasn’t comfortable,” he said.

Unlike Sacco, Henniger wasn’t particularly worried. He left to check on Collier, figuring the young cop was responding to the report of possible gunshots. According to surveillance tape, the sergeant approached Collier’s cruiser at 10:30 p.m. and saw what he hadn’t imagined could possibly be true.

“When I arrived at the cruiser, I looked inside, and that’s when I discovered officer Collier had been shot,” he told the court.

Then, Henniger said, he picked up his radio to report the horrific scene, yelling out a short phrase that echoed multiple times through a tense courtroom Wednesday.

“Officer down! Officer down!” he yelled, his voice conveying his immense distress. “Get me help.”

An MIT officer arrived, and together he and Henning removed Collier’s body from the cruiser and laid him on the pavement to start CPR. Two Cambridge police officers also responded to the call, one of them performing chest compressions and the other trying to restart Collier’s breathing.

“There was blood everywhere,” testified officer Brandon O’Hearne, who heard a haunting noise coming from Collier’s mouth that he said sounded like gurgling.

As the officers tried vigorously to resuscitate Collier, they noted that he wasn’t responding to words or treatment. Still, they worked, ultimately in vain, to save their fallen brother. Neither Henniger nor O’Hearne could say how long they were with Collier before an ambulance came, but at some point one did, transporting Collier away from MIT forever.

Then the officers did what they had been trained to do: cordoned off the scene, established entrance and exit procedures and went to work investigating and collecting evidence.

One day after the final moments of Collier’s life were detailed in court, the young officer’s former Lincoln police colleagues reflected on what they saw as Collier’s most special qualities.

Detective Ian Spencer recalled the day he told Collier he rode in the Pan-Mass Challenge, an 100-mile bike ride for charity.

“Usually, I have to go through the whole spiel,” said Spencer. “I told him, ‘I ride in the Pan-Mass Challenge,’ and he immediately said, ‘Oh, what’s your account? I’ll donate.’”

“Everything people are saying about him is spot on,” he said. “Just a genuinely nice, genuinely awesome kid.”

The three men also spoke of Collier’s vision of his future: becoming a Somerville police officer, which he had openly shared with Lincoln officials when he was hired as a special police officer.

In that part-time role, his typical duties included traffic detail and prisoner transport. He performed those duties with enthusiasm and good humor, the chief said, and no one in the department begrudged him his plans to one day move on from Lincoln.

Collier’s joining the MIT force as a full-time officer was an important step, Spencer added. It was also one that had paid off: The Somerville police department had offered him a job.

He would have been sworn in as a Somerville police officer in June 2013, fulfilling the goal he had worked toward for years. He never got the chance to see that day.