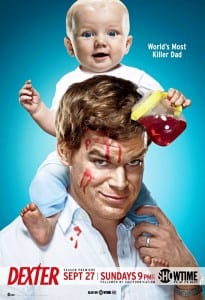 Season four of Dexter kicks off this Sunday on Showtime. And this season, our serial killer with a heart of gold seems to have it all: his beautiful new wife Rita, her two kids Aster and Cody, his job at the police department, and a brand new bouncing baby boy. That’s right. Dexter faces his most challenging nemesis so far: the burdens of fatherhood.

But enough about the baby.

At the end of season three, Dexter learned a hard lesson about friendship when he was forced to off his new best friend, Miguel, for his out-of-control murder habit. As it turns out, the law of Harry does not allow for Dexter to have a best friend. But with Rita and the kids (including the sociopathic bun in the oven), it’s not so lonely in Dexterville. In fact, things might be getting just a little bit too crowded.

Besides Dexter junior, what’s in store for the upcoming season? Viewers can probably count on there being lots of blood. Did anyone really think Dexter would retire from wiping the underworld clean of murderers who got away the first time? Not bloody likely. And who will be this season’s villain? We’ve gone through brother, girlfriend, best friend”¦ who’s left?

A rival serial killer, that’s who. Just when it seems Dexter has settled comfortably into the American Dream, a new murderer known as the Trinity Killer arrives on the scene, killing in threes, and he’s been thwarting law enforcement for decades. And along with Dexter’s new playmate comes the one man (still living) who almost put Dexter behind bars: Agent Lundy, back to track the Trinity Killer, and he brings with him an interesting proposition for Dexter.

Billboards advertising the new season feature a blood-spattered Dexter, a smiling new baby in his arms. It seems the show’s creators are making the birth of baby Dexter a pretty ominous arrival. And judging by the trailer for season four, it looks like killer Daddy Dexter has his hands full. This season, Dexter is asking, can America’s favorite serial killer really have it all? It seems like all he needs is a little time to kill.

Don’t miss the season premiere of “Dexter”, September 27 at 9 p.m. on Showtime. Seriously, don’t miss it. You’ll be sorry.