Sudden Strike 4 is the latest attempt in revitalizing the often forgotten real time strategy series. To its benefit, the WWII strategy landscape is pretty barren at the moment, with developers focusing on other conflicts and the state of RTS games in limbo as audiences take their money elsewhere. Kite Games and Kalypso Media have ignored all that and developed an old school, no frills strategy game with three fully fledged campaigns that romanticizes the golden age of armchair commanders. It is a nostalgic trip that had me dusting off flanking maneuvers I hadn’t used in a decade and demanding arthritic finger dexterity. Unfortunately, much like catching up with friends you haven’t seen since high school, Sudden Strike 4 overstays its welcome a little bit and ends up feeling more like a chore than a triumphant trip down memory lane. 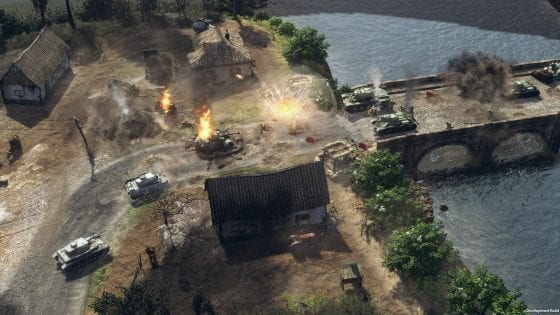 There are three campaigns in Sudden Strike 4, though they do a great job picking up where the other left off chronologically that it feels like one massive conflict. The German campaign starts you in the very beginning of the war, focusing on the invasion of Poland and the conquest of France before shifting over to the massive tank battles of the Russian front. When playing as the Soviets you are on the defensive, battling through the ruins of Stalingrad and ambushing German patrols in the snow. The last campaign has you playing as the Americans, using versatile units in the French hedgerows to defeat the Nazi’s in the last major conflicts of the war. It is a comprehensive summary of the Western Front, complete with historical background into every battle and unlockable footage of the real people who fought in that theater. What is more interesting is that every faction has three distinct generals you can choose from at the start of every mission. These real historical figures all come with their own upgrade tree and specialize in either infantry tactics, armor superiority, or more versatile support units. Using smart tactics and limiting unit losses will net you more stars in each mission, which can be spent on upgrades. Thankfully, you are not locked to one general all game as you can easily move around upgrade points depending what each mission demands. Often times you won’t know what to expect until you jump in, making a restart to rearrange skills a frustrating tactic in the later missions.

At the end of each mission there is a little diary entry that outlines what you did in the last battle. They are a nice touch to give the game a more personal feel but it was pretty jarring to hear a posh British soldier narrating the German and Russian chapters. I understand that it might be difficult to find real Russian or German speakers to do the voice overs but a little bit of an accent could have gone a long way. What is borderline unforgivable is the gruff All-American actor they have doing the voice off all the commanders in the battlefield. No matter if it is the Battle of Kursk or the Siege of Stalingrad, the same American dude it yelling orders at you in his Nebraska twang. When you consider that all your units bark responses in their native tongue, this came off as a sobering oversight. 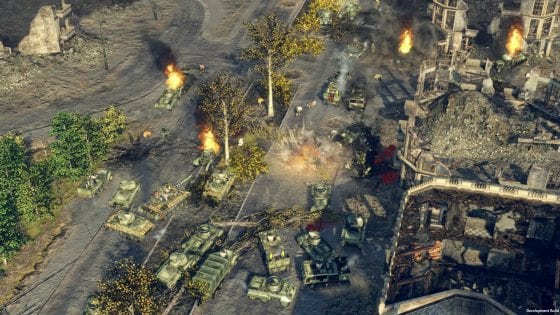 While the miscast voices do take away from the overall immersion, the gameplay does tend to swing on the side of realism. Like the Sudden Strikes before it, this game does not focus on base building or resource management. You are given a set number of units at the beginning of a level and are expected to have them last you as long as possible. You will get reinforcements every once in a while, but these feel more like one last gasping breath rather than a powerful blitzkrieg. The game is built around micromanagement, from resupplying the ammunition of your artillery before they run dry to dividing your infantry based on specialization for when you attack the enemy bunker. It is unfortunate that the user interface is so poorly designed that I had a really tough time coming to grips with the information presented to me. The windows are large and blocky and get in the way more often than not. When I am in the heat of battle and I am unable to find my mortar crew or my tanks roll up to an encampment only to run out of fuel, it gets very frustrating.

This frustration also stems from moments when you feel the enemy is cheating you. Like many other RTS games, there is a fog of war that hides the enemy units from you. Tanks may be the most powerful units in the game, but their field of view is very small, especially when compared to infantry. That means, you need to have a well balanced squad in order to be able to see the enemy and make successful commands to win the engagement. What ends up happening is that no matter what tactics I employ my tanks get shelled before I even get to see who shot me. It seriously feels like the AI can see further than me and always manages to get the first shot in. In a game with realistic damage modeling like this, one extra shell slamming into your tank can really put you at a disadvantage. There are clearly some behind the scenes computing about view distance and range, but while I am playing the game I have no way to determine these metrics beyond trial and error. 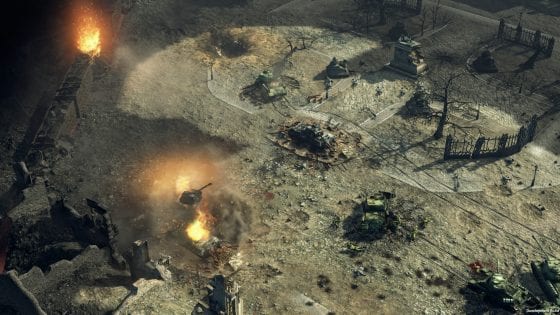 It is really a shame that playing Sudden Strike 4 is so frustrating because it is probably one of the most detailed WWII strategy games I have ever played. Small things like snow piling up on tanks when they are sitting still and granting them cover or functioning lights on all your vehicles when you play night missions really go a long way in building some great atmosphere. You can commandeer enemy vehicles if you only kill the crew and can even drive a tractor into battle if you find one. If you run out of infantry you can even tell your truck drivers to abandon their ride and join a squad. Toss in the destructible environments and this game becomes one of the shining examples of how graphical details can have a direct impact on gameplay. 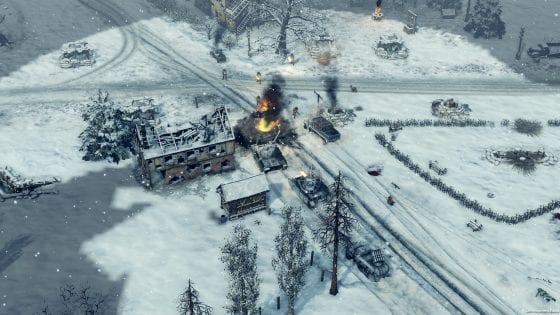 It would be unfair to call Sudden Strike 4 an unpolished game. There was clearly a lot of effort put into making it look and feel like a modern WWII RTS in an era devoid of many examples and it succeeds in that regard. At the end of the day, what ends up bringing it down is its own mechanics. The push to find a balance between realism and accessibility unfortunately leads to a frustrating experience where you feel the computer is always one step ahead of you. From not being able to see an enemy 100 feet in front of you to having no clue how many reinforcements you are going to get throughout the course of an hour long mission, Sudden Strike 4 is an exercise in patience. If you miss the strategy games of old, complete with all of their quirks and issues, then Sudden Strike 4 will have something to offer. For anyone else, this is a dud.

Sudden Strike 4 Review: Field Repairs
Sudden Strike 4 is a beautiful old school WWII RTS that ends up tripping over itself in an attempt to find a balance between realism and accessibility.
Design
Gameplay
Story
Presentation
Lasting Appeal
What worked
What didn't work
2017-08-18
3.0Overall Score