Editor’s note: Blast writer John Stephen Dwyer has been staying with Occupy Boston protesters since the beginning of the protest. He has been filing longer stories every few days with breaking news when it happens.

Two weeks ago, 300 people illegally seized a portion of the Rose Kennedy Greenway and set up tents. The mayor told the police not to stop them, and today the tent city still stands.

More than a campsite, it’s a well-managed shantytown complete with its own reflections of what you’d find in most communities — police, government, restaurant, hospital, school, theater, church and even a home goods store. Groups of grade school and middle school students take field trips here, and thousands of people of all descriptions visit daily. Many drop off donations of food or other supplies. Some stop to ask questions.

Many come just to tell at least one person “I think what you’re doing is great.”

This ragged community occasional fields groups of protestors to march around the city or, as they did earlier this week, engage in acts of civil disobedience such as blocking the bridge to Charlestown and stampeding through the interior of Faneuil Hall screaming for justice as both police and baffled tourists watched passively. This is Occupy Boston.

Part of something bigger 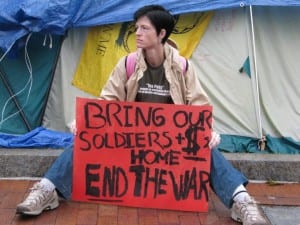 Occupy Boston is part of a movement that exploded in New York City on September 17 as a protest called “Occupy Wall Street.” It has since spread to dozens of cities across the U.S. CNN reports more than two dozen cities around the world, “stretching from Hong Kong to Buenos Aires, Dublin to Madrid,” will be joining the protest today, on what’s already being called “a global day of revolution.”

In a historical context, the Occupy Movement will be remembered as a response to worldwide economic problems that became obvious in December 2007 as well as a protest against a increasing disparity of wealth and a civil rights battle.

Like anything of its size, the movement includes people that don’t agree with each other about a lot of things. Some of its most devoted members are young radicals, whose ideas might shock the soccer moms and dads who stop their SUV’s on Atlantic Avenue to drop off food and blankets to the Occupy Boston community.

But one small sign perched on the curbstone at Occupied Boston says “it’s not radical to want love, equality and compassion for our fellow humans.” From the unbathed Maoist on day eight of an occupation, to the millions of apolitical people whose only affiliation with the movement is through social media, almost all people aligning themselves with the group seem to believe three very broad notions. First, they insist that hurting innocent people is bad. Second, they believe powerful corporations exert too much power on government and have hurt innocent people in numerous ways. Third, they think everyone should get involved in correcting that problem.

It does take some skilled organizers to strike the spark of protest and fan the fires in the desired, non-violent direction, but the Occupy Movement is still intensely grassroots. A handsomely-written and well-circulated text, “Open letter and warning from former tea partier to the OWS movement” is posted on the Occupy Wall Street website and describes how the Tea Party began as a diverse, well-intentioned populist movement before being hijacked by the Christan Right, the GOP and, ultimately corporations. It warns how the media will assist in a similar take over of this new movement and advises ways to navigate these issues.

Whatever its origin, the text reflects a general sentiment among the Greenway occupiers that donations from companies are suspicious, the media can’t be trusted, and both the Republican and Democratic parties can go to hell.

There’s a pathway lined with metal barriers separating Occupy Boston from the paved area around the entrance to the Red Line. It’s been called “Music Row” and even “Tin Pan Alley” as it’s a popular place for people to gather, sit on the wide benches, and play musical instruments. Someone has set up a few tiki-like wood carvings here, and an immense statue of Ganhdi, made of relatively lightweight materials and property of the Peace Abbey in Sherborn, facing South Station.

“Main Street,” a path of wooded pallets bisecting the grassy area, starts here. It’s a precarious route, and the mud on either side gets to be several inches deep when it rains. It’s been muddy often these past few weeks, as the occupiers have endured days of light rain and several downpours. About 90 tents squat on either side of Main Street, 40 tents on the side bordered by Atlantic Avenue and 50 on the side where sparrows have been raiding a wilted sunflower garden. 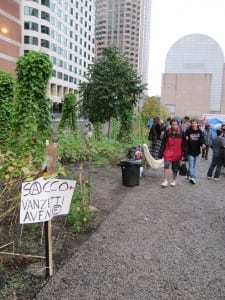 A path runs past the sunflowers, connecting the welcome tent at one end of the park with the media tent at the other. This route was in place before the occupation, but only recently has someone erected a simple sign naming it “Sacco and Vanzetti Avenue.” As part of the effort to keep their community clean, volunteers have been combing though the gravel with rakes on a regular basis.

Occupy Boston is overcrowded and has been for at least a week. Tents are tightly packed, and there’s no room for more. Even finding a place to lie down in a sleeping bag is a challenge. There’s plenty of empty space around the park, but the Occupy Boston protest — while illegal because participants refused to seek permits — is an un-choreographed dance between the city and the protestors, as each tries not to overly piss off the other. 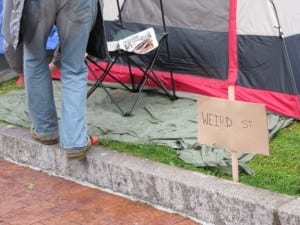 The paved area of the park (the end of it nearest South Station where at least two police officers are standing at all times) is therefore understood to be off limits. Nevertheless, Occupied Boston recently annexed a little sliver of it first occupied by ten tents that formed a sort of “student village” of protestors from local universities. At the opposite corner of the park, almost a dozen tents have spilled out along Atlantic Avenue along another strip of glass declared off limits by the mayor and the commissioner. While apparently no more or less interesting that any other part of the camp, this strip was named “Weird Street” over a week ago and the name has stuck. Weird Street has been an ongoing point of contention with the police from the start. The message conveyed to the police a week ago is that the protestors, as a community, can’t force the owners of those tents to remove them, and individuals in the community are likely to come to those people’s defense if it appears they are threatened.

According to patrolmen who spoke to Blast Magazine last weekend, police were planning on clearing Weird Street on Tuesday. Instead, they ended up turning their attention to a more significant expansion of the tent city that sprung up suddenly as police attention was diverted by hundreds of protestors blocking the bridge to Charlestown. As police demanded protestors leave the new site, Greg Housh, a 34-year old father serving in the center of many conversations between the occupiers and the city, explained “This place is full. We need to expand this site if we’re going to expand the movement. Other cities have expanded, we need to expand as well.”

During the six-hour standoff that followed, Occupy Boston received a visit from Nancy Brennan, Executive Director of the Rose Fitzgerald Kennedy Greenway Conservancy. Addressing the crowd with the call-and-response of the “people’s mic,” Brennan reminded protestors that the Conservancy had asked them not to expand onto a new portion of the park because of special concerns regarding a new irrigation system put into place and works on loan by various artists. But she ended her comments saying “…another thing that the Greenway stands for…is freedom of speech…and I ask, for as long as you are on this land, would you please help us take care of it?” Her smile beamed as the crowd chanted “Nancy! Nancy! Nancy!” in appreciation.

Despite these words of support from the director of the Greenway, hundreds of police marched into the area around 1 a.m. Tuesday. More than 160 people locked arms in a tight circle around their tent city annex and chanted slogans such as “the whole world is watching” and “this is a peaceful demonstration.” Starting about 20 minutes later, the police made 141 arrests and tore down all tents pitched in the new area. In the aftermath, protestors generally expressed the position that the police were just doing their jobs, but they could have done so less roughly. Many report cell phones, cameras, medication and the flags held by a veterans group were thrown away.

One woman, around 60 years old, said “the sight of the American flag being thrown in the trash will haunt me forever…if something like that happened to the Tea Party three years ago FOX News would still be showing footage of it.”

In the wake of the 141 arrests, Occupy Boston made international headlines and Weird Street was left untouched.

Most people passing through Occupied Boston are there because they support what they believe the protest stands for. Many can’t help expressing their solidarity to any stranger who will listen. There are also some, including many who meander in from the surrounding skyscrapers around lunchtime each day, who come just to gawk at the people and their signs. A few visitors — especially business school graduates in neckties — come to tell occupiers how they should be better getting their message across. The community isn’t very receptive to people broadcasting on this frequency as they insist there are multiple interrelated messages that shouldn’t be oversimplified for the benefit of the half-interested. More than one occupier said “either you get this or you don’t.”

Around 11 p.m. last Friday, a very well-groomed young woman with blonde hair stood near the Gandhi statue in a tense argument with several other people. No matter how broadly or how narrowly the small crowd tried to explain the purpose of their efforts, she continued to insist “I just don’t get it…I read the things online, like that thing from New York or whatever, and it doesn’t even make sense!” In sheer volume, hers was the loudest voice in the conversation as she claimed a genuine desire to understand. But it was clear that no useful communication was going back and forth between her and the others.

Occupy Boston, like many other occupation groups, has not released anything resembling a manifesto or list of demands. Participants don’t seem to care if this frustrates the mainstream media or confuses many of the people whose rights they say they’re fighting for. They’re acutely alert to anything that might serve as a wedge within the movement, and see decisions arrived at too hastily as the perfect example of this. As such, when it comes to defining their message, prioritizing their concerns and (eventually) proposing solutions, occupiers seem determined to proceed carefully even if it takes them a long time. Although individual protestors might be impatient, or frustrated about the lack of this or that, the overall spirit of the movement seems to be a that of patient resolve. “How long? As long as it takes!” is becoming one of the group’s many informal mottoes.