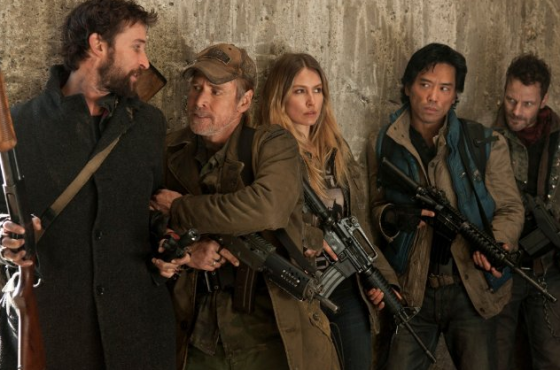 Weaver, Tom and a group of 2nd Mass fighters have to go on a rescue mission in “Young Bloods.”

A commercial leading into tonight’s episode of “Falling Skies” claimed that there were going to be shocking moments aplenty. Though they weren’t quite shocking, a number of things happened that made “Young Bloods” more interesting than last week’s episode.

“Young Bloods” begins with Matt’s first mission, where he lures a pair of skitters into a trap and two snipers from the 2nd Mass blow their heads off. Matt loves the experience, but when Tom finds out that the snipers used Matt as bait rather than sending him on a routing messenger run, he chews them out and puts them both on sanitation duty until further notice.  These two guys are characters we’ve never seen before, and after seeing their rapping/beat-boxing skills, maybe it should stay that way.  Also, it just can’t be ignored that one of the dudes called Tom “Mason Jar. Talk about cringe-worthy.

Meanwhile, the other two Mason brothers are scouting the surrounding area. As they’re scoping out a possible harnessing facility, some rogue kids steal their motorbikes and drive away.  When they track the thieves down, they discover a group of kids that have been dodging the aliens without any help from adults.  The first encounter that Ben and Hal have with this group of misfits is just ridiculous.  The fact that Hal and Ben could actually force a big group of kids—who were armed to the teeth—to lower their weapons is preposterous.  Even though Ben was aiming at their leader, odds would seem to favor the 20 versus 2.  At any rate, Ben and Hal convince their leader, Diego, and a few other kids to come back to the 2nd Mass.

When Hal and Ben return, the first “shocker” happens when it is revealed that one of the misfit kids is actually Captain Weaver’s daughter, Jeannie.  Since Weaver had assumed that his entire family was dead, the reunion is understandably emotional for him.  The two spend some time catching up, and Jeannie tells him that her mom died of a stroke after she ran out of blood pressure meds.  This scene was going well until Jeannie broke out the “papa bear” nickname for Weaver, which brought on some serious eye-rolling (and possibly gagging). Way to ruin the moment, kid.

After getting a number of supplies from the 2nd Mass, Diego gets ready to head back to his people at their home base.  Lourdes overhears him talking in Spanish, so she asks him if he knows anything about a little town in Mexico where she had family. Diego admits that he heard the town was wiped out when the aliens arrived, which brings Lourdes to tears. At the end of the episode, her and Jamil (who has got to be way too old for Lourdes) have a talk about not giving up hope but instead hoping for something else, like their safe travels to Charleston. But the problem with all this is that after seeing what just happened to Weaver, why would Lourdes just give up hope so easily?  Just because one guy claims he heard that the town was destroyed doesn’t mean her entire family is dead.  As an older fellow, Jamil could have given Lourdes some better advice there.

Diego returns to his crew with Hal and a few other 2nd Mass people to find the place ransacked. A shaken up kid that got left behind tells them that skitters came in and took everyone to the nearby harnessing facility. Diego and his remaining people return to the 2nd Mass and ask for help, but Weaver wants to take time to form a plan. Diego says he can’t wait and that he’s going now, and Weaver orders him to wait. That’s when Diego drops the bombshell of, “I don’t take orders from anyone, especially a man who can’t protect his family.” Boom!  Obviously Weaver doesn’t take too kindly to that and violently grabs Diego. Jeannie sees it all happen and yells at Weaver, accusing him of still having anger issues. Then her, Diego and his people head off on their rescue mission before the 2nd Mass can figure out a plan.

The issue with the insinuation that Weaver had anger problems in the past, and still has them, is that throughout an entire season and three episodes we’ve never really seen that. Sure there has been an occasion here or there that Weaver has gotten angry (recalling last week’s locker-punching episode), but there was never a hint of him having full-blown anger management difficulty. In fact, on the contrary he’s usually a rather peaceful, calm, cool and collected leader and soldier.

Unsurprisingly, Matt decides to join Diego and his band of rescuers without asking or telling Tom. The 2nd Mass quickly puts together a rescue team of their own and heads after Diego’s crew. When they get to the harness facility, it’s clear that Diego and the others have all been captured and are in line for a getting a fresh harness on their backs. This scene at the harness facility was one of the coolest (and more graphic) so far this season. We’ve always wondered how the aliens harnessed kids, and tonight we got a nasty look at how they slither out of a giant tank, crawl up the kids back, and then sink spikes into their spines. Watching it all unfold was gross and uncomfortable. but at the same time it was hard to look away.

As one of the harnesses crawls up Matt’s back, Tom and Weaver arrive in the knick of time to gun down the supervising skitter and wrench the harness off Matt before it can attach itself. Weaver saves Jeannie too, who was also on deck to receive a harness. While Tom and Weaver reunite with their kids, Ben spots the tank full of swimming harnesses.  When he approaches the tank and puts a hand on the class, one of the harnesses swims over and Ben’s spike light up, which Hal notices.Then Ben backs away and fires a few rounds into the tank.

This isn’t the best of plans, because the broken tank spills blood-thirsty harnesses out onto the floor, where Tom, Weaver and the others have to gun them all down.  They manage to shoot them all, but not before Weaver gets bitten on the leg by one.  It’s interesting that a harness bit Weaver, because so far they’ve only been seen attached to kids.  Is it possible for adults to be harnessed too, or do harnesses just bite adults?  The rescue at the harness facility certainly provided some new information about the aliens while also posing some new questions as well.

Back at camp, Weaver takes time while he recovers to have a heart-to-heart with Jeannie. The two talk about the past and Weaver apologizes for letting her down as a father. Jeannie forgives him, and Weaver decides to give her his compass (which was once Jimmy’s). They talk about how much Jeannie is going to miss Diego, since she will be staying with the 2nd Mass while he takes his band of misfit kids up into the mountains to hide from the aliens.  Jeannie says that she should let her dad get some sleep, and he (comically) falls asleep instantaneously. As the episode draws to a close, Jeannie leaves Weaver’s tent with tears streaming down her face, and Weaver awakes to find the note she left by his bed. The note explains that Jeannie actually won’t be staying with the 2nd Mass, and that Diego and the others need her much like the 2nd Mass needs Weaver.

The introduction and abrupt closure of this storyline in just one episode was a lazy and cheap move on the writers’ part.  It feels like they cheated “Falling Skies” fans by building up this shocking return of Weaver’s surprisingly alive daughter, only to dispatch her 40 minutes later.  What was the point of even bringing her character in, to torture Weaver some more? No, if they planned on Jeannie still being alive, they should have kept her around for at least a few more episodes, which could help add some depth to Weaver’s character and his past. But instead, he’s already headed back to the mentality of never seeing his family again. Great.

Back to Ben and Hal, who are having a heated discussion about those glowing spikes lighting up while they were at the harness facility. Hal pushes Ben to tell people about what’s been going on, but Ben insists that doing so will essentially be signing his own death warrant. It’s implied that Hal was the only one that saw the spike-glowing incident, which is peculiar since Weaver and Tom were standing just feet away at the time. Hal tells Ben that he won’t rat on his own brother, so for now it will remain a secret.

“Young Bloods” was much more interesting than last week’s episode and had less (but not zero) corny moments of over-acting or poor writing. It was exciting to see a harness facility in action, despite how gross it was watching a harness slither around and attach itself to some poor kid. The Jeannie/Weaver storyline could’ve been good, but it’s already been cut short since she’s heading back to Diego and the others. Also, it was just refreshing for the 2nd Mass to encounter other survivors—sometimes when there are a number of episodes in a row where we only see the main 2nd Mass characters, it gets boring. Even though Diego and his band of kids left by the end of the episode, it was a nice change of pace to bring in some outsiders to mix things up a bit.