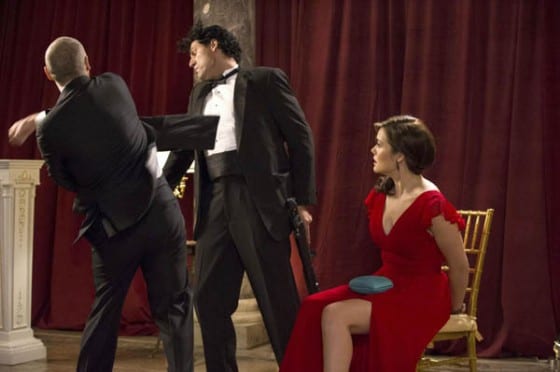 This week’s Blacklist had nearly everything I could have hoped for, in terms of plotting, mystery, and character development. After a few weeks off, it was an invigorating start to the final stretch of Season 1.

The week opens with Madeline Pratt, going by the name Mrs. Reddington, breaking into Red’s safety deposit box. She’s played by the brilliant Jennifer Ehle. If you’re not familiar with her work, you should go watch Contagion right now. Actually, scratch that. Look up the vaccine injection scene and skip of the rest of it because you’ll go insane and never leave your house or touch anything ever again. But basically, she’s phenomenal. She’s also a high-class thief who flirts with Red and asks him for help on her latest heist. Red actually seems quite taken with her, but due to a history that involves her taking something from him, she winds up on The Blacklist.

In giving this name over, Red behaves uncharacteristically stupid. He refused to return to work until the mole was caught and retired right after Diane went missing. That’s obvious enough to attract suspicion of the relatively dumb FBI agents. Perhaps Red just doesn’t care if Harold and co. knows he killed Diane since he knows they can’t prove anything. Either way, he deflects the agent’s questions with non-sequiturs like “Who picked out this paneling?” and a particularly entertaining “You smell nice!” to Harold. Between that and a rant about how a Vermeer painting was so ugly it ruined his appetite for orange sherbet, it gets the criminal mastermind off to a really strong comedic start.

Madeline is trying to steal a statue from Syria, which has a special name but I can’t spell it, which contains a list of still-active Soviet spies hidden inside. He wants the FBI to steal the statue for themselves, but says that thieving is not his strongest suit. “Luckily, we have an ace of spades among us. Isn’t that right, Agent Keen?” Ressler and Harold question her about her father’s criminal record, as well as her own, which she denies. “Because you never committed a crime or because you were never caught?” Ressler asks, to which she simply snaps back “yes” and declares herself up to the task. Elizabeth can get so dreadfully dull at points. It’s thrilling to see her history and complexities fleshed out, if only for a lift.

To win over Madeline’s trust, Elizabeth and Red meet with her, and Red asks her to tell stories which may or may not be real and from her past. During the conversation, Elizabeth manages to pickpocket Madeline’s phone, peaking her interest as well as mine. Who are you, Lizzy? Whoever she is, she successfully swipes and secretly returns a worker’s badge needed for the heist with little effort.

After the failed adoption fiasco, things are sad and awkward at the Keens, with Tom exhibiting a lot of passive aggressive behavior and storming in and out. Suck it up, Tom, you’re (probably) a spy assassin and don’t get to be mad at her. Still, he’s trying to move on, and invites her to come with him to a teacher’s conference in Orlando. Hmmm. Okay, I don’t know what school he teaches at, but clearly I need to get my mother to start teaching there instead, cause I am pretty damn sure she’s never gone to Florida for a conference. But I digress. He finishes off the proposal by asking her: “Do you maybe want to go undercover before you go undercover?” which is literally the worst line I’ve ever heard and I am ashamed of Elizabeth for sleeping with him after that. It killed all the romance of the Florida offer.

Red informs Elizabeth that she’ll be taking him to the embassy party, where the heist will go down, as her plus one. His response to her outfit, “Wow! I even like your clutch” is probably my favorite line of the episode. I think something is lost in translation on this page, but trust me. James Spader is just so brilliantly flippant about everything. However, he seems pretty sincere when he assures her he’ll be her back up. “You have me, and I’m not going to let anything happen to you,” he tells her, earning an adorable smile from the agent. Dammit! I just want him to have been lying a few episodes back and actually be the most unorthodox but lovable father ever!

Back at the FBI, Harold has apparently decided not to let the Diane thing go, even though he has no chance of find actual evidence against Red and should realize that by now. However, he doesn’t, so he asks Meera to find out why Red suspected Diane as the mole. See, Harold, that’s super awkward, considering she led Red to Diane and was working with him behind your back. So, yah, that might not work out that well, buddy.

Elizabeth, after a pep talk from Red, sneaks down to steal the statue from the safe room, but sets off the alarm, getting herself captured in the process. Madeline is escorted to the safe room, when she finds the statue and easily pockets it. Fulfilling his earlier promise, Red beats up a guy or two and finds Elizabeth, tied up and guarded. “There you are! What the hell happened to you?” he yells to her and a confused security officer. “You just leave me alone with that awful Algerian? He’s been hitting on me for twenty minutes!” The rant, which portrays Elizabeth as a spoiled girlfriend of a rich man, goes on for like five minutes and is somewhere between hilarious and just weird. But good weird. James Spader is always great when they give him a good tangent. “What the hell was that?” Elizabeth asks, echoing my feelings. “I don’t know, it just felt so right in the moment,” he replies after punching the security guard out.

The FBI realizes Madeline used them to place the blame on Red, which has worked and infuriated the British government. Sadly(?), this means Elizabeth can’t go to Orlando, causing Tom to realize they need some time apart. “Want me to rough him up for you?’ Ressler asks, straight-faced, after overhearing the fight, and it’s weirdly cute. I want them to leave their respective train-wreck relationships and get together.

It’s then that Harold drops a game-changing piece of information: the statue doesn’t contain the names of Russian spies. It contains the locations of nuclear bombs. Well. To quote Ron Burgundy, that escalated quickly.

Red catches up to Madeline, who snaps at him that she framed him to get back at him for not showing up in Florence. It was apparently, as she puts it, their chance at a fresh start. But just as we’re about to learn the ever-deepening connection between these two, they’re tasered and dropped in a creepy dungeon together.

This is where the episode goes from good to fascinating, giving us one of the most important scenes of the series so far. To explain why he didn’t show up in Florence, Red tells Madeline the story of the Christmas Eve he ran out of gas. He walked for miles, so excited to get home, only to find an empty house covered in blood. It’s Red at his most vulnerable so far, and it’s absolutely heartbreaking, especially since we know he still hasn’t discovered what exactly happened to them. The captors come, interrupting the moment, and drag him off. A distressed Madeline, to save him, agrees to reveal the location of he statue, only to realize she’s been tricked by Reddington, who orchestrated the whole thing…..oh. This character and actress are so phenomenally show-stealing and entertaining that I don’t like this twist. I want her to be important. I don’t want her emotions to be manipulated by him, and I don’t want her to be wasted on a one-off guest star role.

The FBI goes to recover the statue, which results in a massive firefight. You’d think Red would not want to involve Elizabeth in these kinds of cases, considering she could die at any point in this scene, but I guess he’s not concerned? Alas, the statue just has sand inside. Red has the paper, which he removed, but apparently has “no use for rusty Russian firecrackers from the ‘60s,” which he trades for the antique statue. I’m not sure why, but perhaps it’s just for style purposes. Who knows with him?

Ressler and Elizabeth end the episode together, with Ressler cancelling his dinner with his ex-fiancé/current flame/ticking time bomb Audrey to comfort Elizabeth when she realizes Tom is probably going to leave her. I think we can officially say that the writers are at least considering this ship and I’m not making it up. Yay. I do love to be right. Also on the romantic front, Red gets a letter from Madeline, who escapes unscathed and smiling. I’m so thrilled that she didn’t go to jail or die and that she may return in a reoccurring capacity. This episode would have been a joy anyway, but Jennifer Ehle elevated things to another level with her skills and complexity. And finally, on a less romantic note, a creepy and extremely weird person comes to tell Harold to stop investigating Diane’s disappearance. There’s a lot of unnecessarily dark, suspicious music.

I haven’t enjoyed an episode this much since the Anslo Garrick two-parter. This had major backstory for both our leads, development in their relationships, and the introduction of a killer character that I hope can find a home on this show.