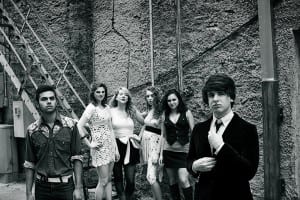 My faith in the Boston music scene was aggrandized ever so slightly on Sunday after seeing a matinee show at the Middle East Upstairs headlined by Art Decade, with whom I talked last weekend, and fellow Berklee bands The Dirty Dishes, Southern Belle, and Shapes and Numbers.

After hearing a lot of buzz about Art Decade’s incorporation of a stringed quartet in their live show, I was intrigued to say the least. The quartet and power trio didn’t interact like two separate entities, as one would naturally expect, but rather like one body, sounding symphonic at times. Art Decade’s set was a classically driven indie rock performance, in not only the wide variety of texture the quartet brings, but in the music itself. The songwriting screams that of a classically trained musician. While at times this sounds belabored and obvious, for the most part it works, creating complexity and at times, chaos, out of even the simplest of parts.

Guitarist/vocalist Ben Talmi played equal parts frontman and conductor, delivering an energetic performance while leading the quartet, while bassist Binod Singh Jr. shredded through all the registers of his instrument, free to noodle a bit more with the bass’ older cousin, the cello, holding down the low end.

The other standouts of the day were Southern Belle, who played an engrossing set of dynamic-shifting electro/experimental pop. The group’s tight guitar work and magnetic pre-recorded loops might have turned the room into a dance party had it not been 2:30 in the afternoon. I’m definitely looking forward to seeing what this band does in the coming months.

Shapes and Numbers opened the show, playing a lights out cover of seminal Boston classic, "Where Is My Mind?" Whenever you here a Pixies cover in the Hub, it’s a good day.