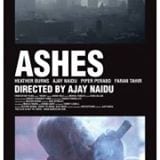 In Ashes, billed as an Indian-American (India, not Native American) crime drama, the lead character and namesake of the movie (his name is Ashes) turns to drug dealing to help pay for his mentally ill brother’s treatment bills. It’s a Breaking Bad type of premise, though Ashes does seem to enjoy the life and frowns upon traditional hard work.

After a series of betrayals and his brother’s suicide, Ashes rejects crime and embraces a more noble life. I believe this is meant to communicate something about Indian and Indian-American culture, but it’s a generic theme which could apply to many crime movies (or movies in general) where ethnicity plays a role.

Most famously, The Godfather explored Sicilian devotion to family. In Mean Streets, a less sweeping Italian crime movie, Catholic penance was a central theme. In non-crime movies such as My Big Fat Greek Wedding, the boisterousness and idiosyncratic nature of Greek families, as compared to bloodless WASPs, is the takeaway. In Bend it Like Beckham, we understand what it is like for women in immigrant, Indian communities: striving for athletic excellence is taboo. Though the film Ashes is populated with Indian characters, it never feels as if it goes beyond the surface. Devotion to family is a theme, but how is that uniquely Indian? Of course, someone more in tune with the culture will probably pick up on cues that I missed, but if the movie is that subtle it will surely miss with a general viewing audience.

One thing I was able to understand is the notion of ‘ashes.’ The movie is book ended with the character Ashes down by Coney Island’s Wonder Wheel (The Warriors, anyone?), scattering his brothers ashes into the water. This is a sacred practice for Indians who will scatter ashes of deceased relatives into the Ganges River. But again, I’m not sure what the subtext is supposed to be. That’s where the movie could go further and deeper but tends to pull back.

If the script is unclear or fails to penetrate, Ashes makes up for it with artful cinematography, editing, and acting. Piper Perabo makes a cameo appearance as a mentally ill woman involved with Ashes’s brother. Ashes’s brother, Kartik, is perhaps the most challenging role of the film, and the scene where he commits suicide is perhaps the best of the whole movie. I had reservations about him at first because at times you can see the physique of the actor (Faran Tahir) is stunning, which feels out of place for a mentally ill man who we barely ever see out of his apartment, but after a while I looked past it.

Ashes, despite its shortcomings, is a competently made film, and Ajay Naidu (movie geeks will recognize him as Samir from Office Space), who plays the lead, also directs. This movie marks his debut as a director, and it should earn him enough fans and credit to make another film. I’ll look forward to seeing what he produces next.

Cast and credits for Ashes on IMDB here.