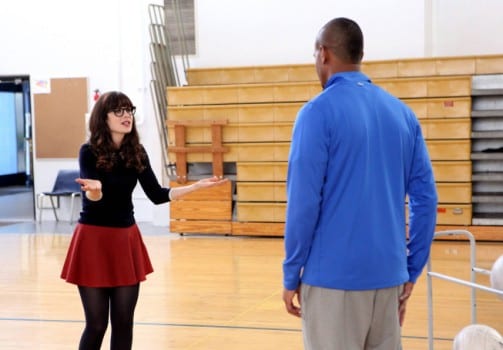 Jess (Zooey Deschanel) gets Coach (Damon Wayans Jr.) a job at her school.

The difficulty I’ve found recently with writing about New Girl is how utterly formulaic it becomes after a number of episodes pass with no real shift in the dynamics or storytelling techniques. New Girl hasn’t taken many chances as of late—which isn’t terribly problematic with episodic sitcoms, however it could add a welcomed variety.

This week’s episode doesn’t necessarily progress from that idea, but it does rearrange the groupings a bit and gives most of the characters a positive note to end on—Coach in particular finally gets an episode to shine.

We learn at the start that Jess has managed to snag a coaching job for Coach at her school. She enthusiastically bangs on his door to wake him up for his first day and he peaks his head out, deadpan and says that he doesn’t like kids, or teaching, but he does like paychecks. I had to watch this episode later than the airtime and as I spend my spring break at home, sharing a room with a younger sister, I had to stifle my laughter at Damon Wayans Jr.’s delivery of that line. Every New Girl episode needs to begin with that big of a laugh.

Winston, Schmidt and Nick take the day to go and visit the store that Schmidt threw all of his money at for Abby, Jess’s sister. Schmidt is talking about how he wants to progress forward in life rather than be like Nick and be content to live in the caboose of life. He thinks Nick loves it there with no expectations.

The conversation is interrupted when a man comes into the store to look around despite it not being a real store and while looking falls and breaks his arm—he immediately threatens Schmidt about suing him.

Coach is having more luck as we seem him thoroughly enjoying coaching the boys volleyball team. He tells Jess during a break that he loves it—all of it. During their talk he notices that Jess has become a bit of a pushover when it comes to offering to take favors from other teachers at the school. When he calls her out on it she tells him it’s because she’s hoping that the Principal will notice all of the hard work she puts in and in couple years when she’s earned it she’ll get the Vice Principal gig.

Coach tells her that if she wants the promotion she should just ask for it, and she says that she believes good things only come from dedication and hard work.

Coach thinks that’s ridiculous and uses a volleyball metaphor and yelling to sell his point.

Back with the rest of the boys, they’re discussing how to handle Schmidt’s predicament since he can’t afford an attorney and Nick says that he could do it—he’s legally allowed to practice in the state so why not? He says it’s just like riding a bike, you never forget.

Flash to a scene where Nick Miller forgot how to ride a bike.

He tells Schmidt that he’ll take on his case but only if he says please. I’m surprised Schmidt agrees at all but it allows for him to play straight man to Jake Johnson’s more unhinged Nick. Schmidt quickly realizes his mistake as the three of them role play the situation to try and see how it will turn out and once Nick begins asking questions on how to do his job, takes that as the final straw and fires him about as fast as he hired him. Schmidt will just have to represent himself and deal with the consequences rather than let Nick into the room and turn it into an embarrassing situation. I was relatively disappointed in Nick’s lack of success; it would have been nice to see him win.

Jess is having a good day. After taking Coach’s advice she went to her boss and asked him about taking the Vice Principal position and she was given it without any hassle—indicating that the job is more work that it may be worth and that her boss is just happy for someone to take on his workload.

Jess is still excited though and so is Coach when he hears.  These two characters have a similar enthusiasm—albeit shown in difference venues—and their personalities work well together.

Soon Jess realizes that the perks of the job (which aren’t a lot) don’t erase the downsides which include budget cuts which result in having to fire teachers to save money. Jess is told to cut the most recently hired first and realizes that this means Coach. She doesn’t want to, but the principal gives her an ultimatum, saying that she has to or she’ll lose her new position.

Jess, in her tough spot, talks to Coach, who understands but is also equally crestfallen having grown attached to the job and the kids he was coaching.

Nick is also stewing about being fired by a friend and has determined that he’s going to ignore what Schmidt said and is going to prove him wrong in the meeting. This would probably be a more plausible plan if he had thought beyond what briefcase he was bringing and how studious it made him look. He grabs the briefcase and his power suit and is ready to take on the world.

Nick shows up at the meeting with Winston in tow and it takes 30 seconds for me to cringe at how awful Nick is doing. I recognize the comedic element and Johnson sells it but it’s hard to not feel some sort of embarrassment or sympathy for the character.

It continues to go downhill until Nick brings Schmidt outside to talk to him. He tells him to trust whatever he does next and to just go along with it. They walk back into the room and Nick sneaks some bolts and screws into Schmidt’s hand and just as Nick sits back in his chair, it collapses and he falls dramatically to the floor.

His plan is to fake negligence—a case that will be annoying to have appeared on the other attorney’s desk.

“What do you call a lunatic who has one case and no hobbies? Your worst nightmare.”

This at the very least showcases that when he puts his mind to it, Nick can accomplish quite a bit. Even if it’s due to him bending the rules a bit.

Coach and Jess’s plot gets tied up a bit neater. After drinking and getting a little emotional the two of them decide that they can’t listen to what their boss said and need to go to the volleyball game and get Coach’s job back.

The principal at first is against it—saying they don’t have the money and if they keep Coach on they’re going to have to cut something else but things are sorted out when another teacher suggests moving a practice to another room.

It’s decided that things can be moved around if it means saving a job.

Out of the two I would have enjoyed seeing the Coach and Jess plot given more time—especially since the pairing worked so well—but since it didn’t have the obvious big laughs, more time was given to the Nick and Schmidt B-plot than was necessary.

I didn’t give much mention to Cece’s plot because it seemed too detached from the rest of the story and seemed like it was just there to make sure all of the characters were included. She’s asked about by a guy who’s only 20 years old (this 22-year old is dubious) but his selling points are his charm and his intelligence.  And he’s super handsome—so Cece agrees. The boys clap and jeer as she leaves with him.

The ending seems almost inconsequential but it’s that lackadaisical nature that allows for it to stick its landing. Nick walks in on Jess passed out in bed, surrounded by paperwork. He makes a comment about them being a power couple and cleans up the mess, turns off the light and lies down next to her, content.

A lot of viewers have found themselves complaining about the way the Jess and Nick relationship is being handled, either saying that the spark is gone now that they’re actually an item or that their storylines dominate too much of the screen time.  The end showed how the show can utilize their relationship and allow for their moments to feel natural without dedicating large portions of the episode to them. They spent their day apart, they came together to sleep it off—the end. They work; they didn’t need to put work into the dynamic this week, so why force the issue? If more relationships were allowed to just be on television shows rather than the audience being force-fed a new dramatic issue of the week, it’s likely that the lead pairings would fare better in popularity.

Another solid episode and I can hardly believe that we’re already 19 episodes into the season and that it will be drawing to a close soon.