Simple, elegant, and visually evocative. A few words I’d use to describe Mud, a thriller-drama starring Matthew McConaughey, Reese Witherspoon, and Sam Shepard. Those are the name players, but the true star of the picture is newcomer Tye Sheridan. Sheridan was good in Tree of Life, but in that film it was impossible for the actors to express themselves, as characters were overwhelmed by sensuality run amok. 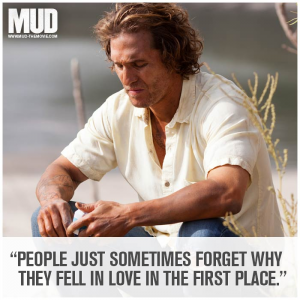 In Mud, Sheridan is allowed to perform and is wonderful as a boy coming of age on the Mississippi River amidst poor yet beautiful surroundings. The story is very reminiscent of Shane, as Sheridan’s character struggles to make sense of his parents strained marriage and must choose between following his workaday father or the mysterious and romantic man he meets on a Mississippi River island named ‘Mud.’

Mud, played by McConaughey, is everything his father is not. He’s a criminal. He’s passionate. He’s driven by true love. Everything about him is wrong, but for Ellis (the name of Sheridan’s character) and his friend Neckbone (also well played, by Jacob Lofland), Mud is irresistible. Mud is hiding out on the river-island, attempting to reunite with his girlfriend Juniper (Witherspoon). Mud killed a man over Juniper, and the deceased’s relatives are coming for revenge. Mud must rescue Juniper and escape the clutches of the law, as well as those seeking vengeance. As Ellis sees his parents’ marriage falling apart, he takes sanctuary in Mud’s quest and makes it his mission to help the outlaw.

Some may think the movie plodding or slow. It has thriller elements, but it is patient as opposed to kneejerk in this respect. It doesn’t need huge twists and breathtaking chase scenes or choreographed brawls to move the story forward. Naturally, there are some moments that depict violence and danger, but those are mostly brief, as Mud is more about dashed idealism and romantic awakening than gunshots and fist fights.

Its visual appeal recalls Winter’s Bone. Both movies effectively capture the beauty of the South, juxtaposed against crushing rural poverty. I think Mud succeeds more than Winter’s Bone, however, because I came away from the latter with a feeling of exploitation. It was as if the makers of Winter’s Bone were judging their characters and their squalor, whereas with Mud I felt no such vibe. To be sure, there is penury and cliché in Mud: the men wear John Deere type hats and the women jean shorts, snakes slither in the creek, and people live in ramshackle house boats and trailers. But there is no mockery in it. It is what it is, and Mud finds a gentle grace amidst adverse settings.

I didn’t care for the ending of Mud, but others will surely differ (and I won’t give it away). But by the time of the conclusion the real story has already been told. Tying up the plot is an afterthought. The strength of Mud is not to be found in whether the good guys or the bad guys win, but in how a young boy approaches manhood and the choices that lay before him. Beneath all the sub plots and the trips to the Piggly Wiggly, this is where Mud derives its simple and poignant power.