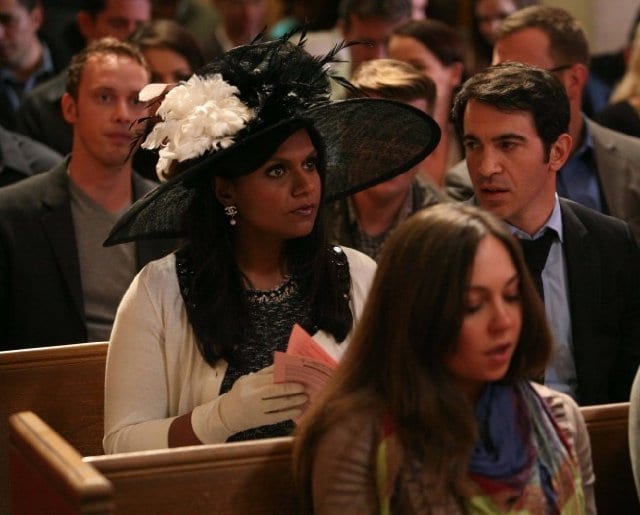 Two things I never expected to see in the same half hour of television: a professionally DJ-ed church service and a riot at a women’s prison. This episode gave us exactly that, and while things got a little strange, everything turned up amusing in the end.

Taking on Big Topics like religion in comedy can get iffy sometimes—jokes don’t always land on the intended side of the offensive/inoffensive borderline—but all told, I thought the subject was handled nicely in this episode. Danny being his usual grumpy self about his own Catholicism versus other Christian sects makes so much sense for his character, and Mindy’s pop culture-based “church outfit” is the greatest. Thankfully, the episode is paced in such a way that we don’t spend the entire time exploring everyone’s religious differences.

It’s really the first half that focuses on Mindy’s experience with Lutheran minister, Casey (guest star Anders Holm). She meets him on the subway after he makes her miss her stop thanks to his giant boxes of strollers for Haiti that trap her inside the train. Mindy tries to prove she’s a good person, too, by playing the doctor card (literally, he asks for her business card as proof), and he asks her out. Not that I’ve ever been asked out on public transit, but my instinct is don’t, especially when you can’t verify that those are actually charity strollers in those boxes. But it’s fine, because without Mindy’s willingness to engage in dating shenanigans the show wouldn’t exactly exist.

Between the asking out and the actual date, there’s an obligatory scene where Mindy introduces the idea of Casey to her friends at work and establishes the B-plot of her not wanting to join them on the annual free women’s prison checkups trip. I wish the office interactions weren’t so often relegated to simple exposition stuff like this; when they focus on the workplace comedy, that’s where the whole ensemble really comes through.

Mindy and Casey’s date is off to a good start as they plan a tour of New York based on places that used to be ravaged by various diseases (a tour I would totally take, by the way). Things take an unexpected turn when Casey prays before joining Mindy in chowing down on the appetizers. She’s totally taken aback, and he explains that he’s a minister.

Mindy takes her conundrum to Danny, who mostly insists on talking about how Catholic he is, but he does agree to accompany her to Casey’s service. Mindy’s logic is that Danny knows church, so he can help her tell if Casey is legit or actually a cult leader. She dresses for church in one of the most ridiculous hats I’ve ever seen outside of My Fair Lady, and when her brother Rishi—who’s crashing for spring break—calls her on it, she dismisses him with a Tyler Perry reference. Mostly, I’m just excited to have seen Rishi twice in the last couple of episodes, which I hope means that he’ll be around more often. He’s genuinely funny, and has great sibling chemistry with Mindy.

Danny convinces Mindy to ditch her hat inside the church, much to the relief of the people sitting behind them. The service isn’t anything like buttoned-up Danny expected: Moby is DJing, Mindy calls it a party, and Casey’s sermon includes both the phrase “I hate God” and some singing of Bruno Mars. Mindy catches up with Casey outside the church, into him even more after his performance, but he rejects her on the basis that he’s more selfless than she is. Instead of resolving never to speak to him again because he’s kind of an ass for that, Mindy takes that to heart and decides to join the prison trip.

In the car, Morgan gives the group a pep talk that mainly consists of him doling out paranoid advice about how to deal with the prisoners. Or at least it seems paranoid until that riot breaks out. Because he’s Morgan, though, they mostly ignore his pearls of prison wisdom and go ahead with the exams. Almost all of the women line up to be checked over by Jeremy, but Morgan yells them into equal lines. Mindy has a rough time of it until one prisoner asks to be caught up on the Real Housewives, so they naturally hit it off.

Caught up in being “good” and not realizing the impending consequences, Mindy gives her new friend candy bars and her own scarf. Meanwhile Betsey impresses Beverly (and me) by scaring off a prisoner who recognized Beverly as someone named Susan. I hate myself for even caring, but I’m almost interested in that bit of Beverly backstory. We never examine it, though, since when Mindy’s patient drops her candy stash, a full-blown riot breaks out.

It’s pure chaos for a minute, but the highlights for me are Jeremy attempting to fend people off with a chair and of course, that one prisoner chopping a sizable chunk out of Mindy’s hair. Where she got scissors from I don’t entirely understand, but Mindy’s look of horror overrides any need for logic in this situation. Danny helps stitch her face up after everyone’s calm and stops her breakdown by reassuring her that she is, in fact, a good person. Aww. I don’t want to ‘ship it, but the show is making it awfully hard not to, I’ll be honest. Wherever the writers take those two, I’m at least glad they’re becoming closer as friends. It’s a big sign of growth on both their parts.

Morgan delivers an intimidating lecture in the car on the way back in which he chastises everyone for not listening to him. It’s always hard to tell with Morgan when he’s being serious and when he’s just being Morgan, and I think that’s why this scene is so successful; when the person you’re used to laughing with (or at) suddenly gets angry at you, it’s a serious shift in dynamic. What’s also interesting is the bit of character that gets revealed here in Morgan’s line about his authority: “When it comes to prisons, I’m the gynecologist and you’re the nurses.” He’s been so one-dimensional lately that I was taken aback by the implications of this line; I literally hadn’t even realized that Morgan might feel disrespected by his coworkers because the narrative always puts him in the punch line position. I wish the show could find the right character balance so we can get the chance to explore more than just Mindy or Danny.

The episode ends with Rishi and Mindy out to dinner when they’re interrupted by, you guessed it, Casey, this time with two Haitian kids in tow. He’s taking them to laser tag but Mindy looked so troubled what with her face being stitched up that he stopped in to check on her. Rishi delivers a great protective sibling speech to Casey where he tells him about Mindy stopping his bully problem in elementary school and how she’s a good person no matter what he thinks. Casey apologizes, even through his annoying habit of constantly correcting Mindy, and he heads off to laser tag with the two Haitian boys. Casey texts her asking for a second date—ugh, that praying pun and angel emoji are gag-worthy—and while Mindy doesn’t reply, she’s clearly softened to him. While Anders Holm was thoroughly enjoyable as Casey, I kind of hope we don’t see him again anytime soon. I don’t think I could take much more of his smugness. Rishi, however, should be on the show all the time.

Ensemble balancing problems aside, “My Cool Christian Boyfriend” turned out pretty entertaining in the end. I wouldn’t call it The Mindy Project’s best work, but it certainly wasn’t the worst. And any episode that involves Mindy tackling her selfishness is a worthwhile episode in my book.