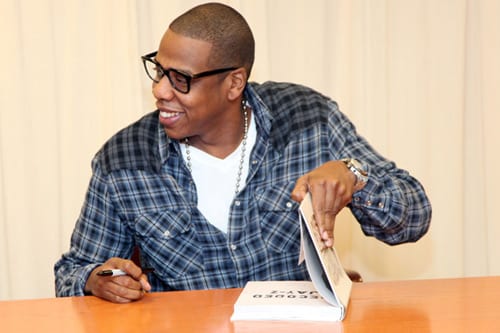 Holdengräber started by reading a passage from “Decoded.” It was about Jay-Z’s family life when he was young. Although his parents were separated, he said, “I had super cool parents. The house was filled with joy and emotions.”

When Holdengräber brought up his parents’ separation, Jay-Z said, “We all have the same emotions as human beings whether you are black, white, female, or male.” By emphasizing that we are all the same, he saidmusic as “a conversation with feelings” and it was something that he needed when he was having a hard time when he was young. He said, “You can decide what decision you would make whether good or bad.”

West asked Jay-Z how to speak to the younger generation and how Jay-Z would characterize himself. “Music has saved my life,” Jay-Z said. “The most important thing was to make good decisions every moment since especially musicians have greater responsibility. We all are complex human beings. There is no black or white.”

Jay-Z spoke of the importance of context behind his stories in the book.

“It is very important to give people stories with the context. Without the context, we tend to make excuses for the past decisions that we’ve made. This book is another form of a conversation. Music is a conversation for us, also.”

Jay-Z also pointed out that the perception of rappers has changed. “People used to say ‘they (rappers) only talk about bitch and ho.’ That’s so black and white.” After his comment, Holdengräber responded with a blank stare which made the audience laugh. Jay-Z, however, smiled and said, “The book is a deep understanding of why we are all here.”

West moved on to Jay-Z’s social aspect and how it is like to get into inside of the world, soul, mind, etc. Interestingly, Jay-Z talked about the connection between hustler and freedom fighter. He explained they both pursued some kind of excitement but the crucial difference between them was a level of maturity. Considering street hustler, he said, “You improve your position by being successful in the society and being proud of yourself.”

Holdengräber threw in the topic a sense of intimacy and why we have to keep the distance each other. Jay-Z shared his view, saying, “Most of all emotions are pretty much the same. It is universal. But it depends on who we are. That decides the distance between us.”

One of the most interesting topics was what Jay-Z called the “power of words.” He said that we all enjoyed all kinds of legendary records, such as Michael Jackson or Prince, but when talking about words as ordinary words, we could simply tell our stories by using our own language. When West summarized the

point by saying, “So, you can define your reality by using words and we can keep the tradition alive and pass onto the younger generation? Oh, where is Lupe? Lupe is here today! Lupe?” The audience looked spaced out a little bit and finally found “Superstar” rapper Lupe Fiasco sitting in the audience.

“Rap is entertainment but also some sort of truth and integrity; It’s poetry,” the rapper said. “So, it is important to encourage new artists not to be afraid of themselves and not to be afraid of using their own voice. People are still consuming music.”

Jay-Z said he was lucky his first album came out when he was 26 so he had a lifetime of experiences to draw on and had the maturity to know what he wanted to say. “It takes time for new artists to find what to talk about.” And then he talked about a notebook that he used to be carrying around no matter where he went. He was “obsessed with writing and wrote down whatever in my mind,” which ended up enriching a lot of his tunes. He used his famous tune with Rihanna and Kanye West, “Run This Town,” as an example. He said, “I didn’t think it was gonna be a hit record. I thought it didn’t have any meaning but when looking at the lyrics, I realized those words had a deeper meaning.”

The topic dramatically changed again when Holdengräber said to Jay-Z, “What’s fame?” Jay-Z answered, “It’s more like a challenge to me. We have to move forward the way greatness and integrity goes.”

West asked Jay-Z what the world today would look like to the rapper. Jay-Z retuned to the his original point by saying, “We are all complex human beings and are in search of something, like a greater purpose or why we are here.” And his talk went to the conclusion that “rap is powerful” because it would be coming from our own experiences. He added, “How fortunate we are to have our own labels because you have to have control over your career as well.”

The conversation moved onto Jay-Z’s mother and father. Jay-Z talked about his mother, “She was very strong. She allowed me to find my own voice.” Regarding his father, who left when the rapper was 11, meeting his father made Jay-Z understand why his father left and Jay-Z was able to forgive his father. He said, “One night my dad’s younger brother, Ray, got stabbed and died. My father would go out at nights and look for a guy who killed him. And my mother said, ‘how can you leave your family like this.’ You know, [he was] risking the family. But my father said, ‘no, I have to do this.’ But that difficult dynamic meant he started taking drugs and drinking. Something happened. Without knowing the context, I had all this anger. But once I knew it, I could understand it. Drugs made him further from his true self.”

When West mentioned President Barack Obama, Jay-Z explained that he used rap music as a tool for Obama’s political campaign before Obama became the U.S. President. He said, “It was an unbelievable feeling.”

The questions were disorganized and sometimes appeared random, throwing Jay-Z and the audience for a loop at times; and Holdengräber sometimes made things awkward. But it was also an open and honest look at Jay-Z’s life thus far; something he hopes “Decoded” will give fans as well.