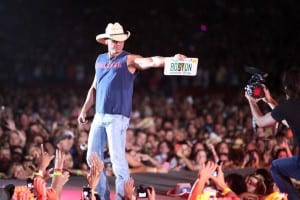 Chesney and McGraw rolled into Foxboro Friday night for their first show at the stadium. The show kicked off with Jake Owen and Grace Potter and the Nocturnals. (This critic missed Jake Owen and most of Grace Potter because she was tailgating like a true country girl.)

McGraw then graced the stage with his trademark tight blue jeans and black cowboy hat. He opened with “Felt Good on my Lips” from his latest album “Emotional Traffic.” However, McGraw performed his most beloved songs that help made him famous like “Everywhere”, “Something Like That,” “Where The Green Grass Grows,” and “Just To See You Smile” to name a few.

McGraw doesn’t move around much on stage and doesn’t have much rhythm However, it doesn’t really hurt McGraw. His voice is as close to perfect as you can get live. Plus, the man is just amazing to look at as evidence of the panties and bras that flew onto the stage while he was singing.

The real treat came when he performed “I Need You” and wife/ duet partner Faith Hill made a surprising appearance and performed with her husband. The stadium erupted with cheers that even overwhelmed the veteran singer Hill.

McGraw was at his best when he performed ballads like “Better Than I Used To Be” and “Live Like You Were Dying.” His voice can reach a god like pitch for a male singer that gives goosebumps to concert goers.

He closed with his latest single “Truck Yeah” which left the audience at the perfect party high ready for Chesney.

Chesney opened with “Beer in Mexico” in the middle of the field and half way through the song flew over the crowd on a swing. By the time he made it to the stage, he went into the hit “Summertime.”

The night belonged to Chesney who is charisma incarnate. He knows how to make a whole stadium feel like they are in the front row. He simply smiles and the audiences loses it.

“It’s the last night of the summer for us, and I couldn’t think of a better place to close out the summer of playing music than with two nights in Foxboro, Massachusetts,” Kenny said. “But summer isn’t over yet! Will you let us reach into your hearts tonight and fill them full of music?”

Chesney also professed his love for city of Boston through out the evening. He even wore a “Welkah” t-shirt on stage that was covered in sweat by the end of the night.

“This is the one or two nights out of the year we get to do this song and the people know what we’re talking about,” Kenny said as he began to sang “She’s From Boston.”

The country star also shared his tender side with ballads like “That’s Where I Come From,” “Come Over,” “Somewhere With You,” and “You and Tequila.” Potter graced the stage again to perform “You and Tequila” with Chesney and rivaled the chemistry between McGraw and Hill.

He also declared his fans as “No Shoes Nation” stating that the fans help create something “very unique.”

For the encore, Chesney and McGraw both performed their recent duet “Like A Rockstar” as well as Chesney’s “She Thinks My Tractor’s Sexy” and McGraw’s “Indian Outlaw.” The showed closed with Chesney, McGraw, Owen and Potter performing Jackson Browne’s “Running on Empty.”