I’ve got a confession to make.

Until Tuesday night I was an “American Pie” virgin.

The first “American Pie” came out in 1999, which means I was about 13 years old and just a little too young to see it. Then I got older, the Clinton Administration ended, I started reading feminist literature in high school, and I never did catch the bandwagon to see either of the sequels, nor of course the straight-to-DVD issues.

I know all the cultural references. I’ve seen the t-shirts and heard the jokes about Stifler’s mom, so it’s not like I was going in blind. But here I was, with an assignment to see the sequel to a major 90s cultural icon, and for once I knew less than the Broseph sitting next to me.

Here’s what I learned:

Your opinion of “American Reunion” is going to be based primarily on whether you find a bunch of 30-year-olds hitting on barely-legal girls in bikinis hilarious or deeply creepy. For me, it was a little of Column A, a little of Column B, probably because I don’t have daughters. The 30-year-olds are our fierce cast from the four previous movies, back in town for their 13th (?) class reunion. Led by hapless Jim (Jason Biggs), now raising a son with his wife Michelle (Alyson Hannigan), most of the group seems very much like most of 30-year-olds I know. They’ve settled into mundane but steady jobs, are either married or in steady relationships, and are more or less happy with their lot. Stifler (Scott) is the exception, of course: permanently stuck at 17 emotionally, he works as the sexist temp in an investment firm, lives to re-live his gang’s past glories, and is perpetually horrified that all his friends have grown up and left him behind. 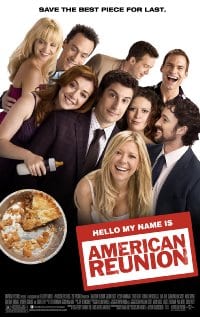 There’s a lot of bouncing B-cup tits, and jokes about masturbation, and lines about that one time in band camp, more than enough to satisfy the average “American Pie” fan. My personal favorite moment is when a naked and hung over Jim awakes in his family’s kitchen and tries to hide his shame in front of his wife and her friend by covering himself with a pot lid. A transparent pot lid. And Eugene Levy, who pays the rent by appearing in all these movies as Jim’s sweet and over-sharing dad, has a wonderful couple of scenes with Stifler’s mom (the fabulous Jennifer Coolidge).

But Scott is without a doubt the most surprising. I had always assumed that Stifler was just the crass, bullying misogynist that’s contractually required in these movies. And he is all those things, but mostly Stifler is a man who goes through life literally vibrating with manic sexual energy, like a revved engine with the parking brake on. Upon seeing someone he only vaguely remembers from high school, he comes up to the poor bastard with a crazed Joker smile, and says, “Hey, bro, how the fuck are you doing?” It’s a throwaway line, but Scott makes it simultaneously exciting, friendly, hilarious, and slightly terrifying.

It’s not Shakespeare. It’s not even the funniest movie I’ve seen in the last six months. But the best thing I can say for “American Reunion” is this. When I left the theater, I wanted to go back and watch the other ones. I wanted to make that cultural connection, to fully pop my “American Pie” cherry.

And who knows? Maybe I’ll finally get around to watching “Dude, Where’s My Car?”