I am really trying to write this review without sounding like a humorless shrew. It’s not going well.

This movie wasn’t meant for me anyway, of course. This is a movie with a title that was only supposed to be working title, starring a guy who’s previous credits include an episode of “iCarly.” It’s that movie about a bunch of horny nerds who throw a party that runs out of control. The party is for sweet, nerdy Pasadena resident Thomas (Thomas Mann), planned and executed by his friends, New York-born Costa (Oliver Cooper) and Lothario-in-training JB (Jonathan Daniel Brown), and recorded by the slightly-sinister AV-fanatic Dax (Dax Flame), who in one captured image displays more personality than the other three combined. The party, obviously runs out of control, and ends up involving the aforementioned little person, a lot of humping and grinding, broken limbs, naked high school girls in the pool and the bouncy castle, and culminating in an angry ecstasy dealer with a flame-thrower.

The entire evening is “captured” by Dax’s camera, giving the movie a home-video quality that was edgy and cool, oh, about 10 years ago. The jokes are from 10 years ago as well, based on the idea that rubbing your friend’s toothbrush on a soap bar and calling them a fag when they won’t drink is hilarious. 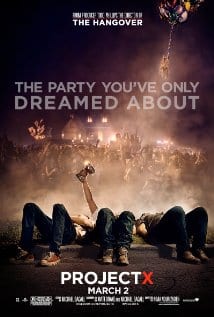 There is a certain amount of this one should expect. This is a movie by and for teenage boys — crazed, stupid hormone monsters who for the most part want nothing more than to steal their parents’ liquor, set things on fire and watch a topless girl jump in a bouncy castle. And there’s nothing wrong with that. It’s part of the human condition; and just because they are crazed, stupid hormone monsters doesn’t mean they don’t have complex internal lives and souls. It doesn’t mean their stories don’t deserve to be told.

But there’s a difference between accepting a teenage male’s appetite for destruction and naked young women, and acting as if those instincts are heroic or, God help me, revolutionary. When Thomas climbs to the roof of his home and discovers just how many people are running rampant in his neighborhood (and all for him), he reacts with the joy and gravitas of a young, sweaty Caesar. He then gives the finger to the news helicopter flying overhead, howling something that I believe was supposed to be an incitement or call to action. But it didn’t look like a hero surveying his domain, or a rebel asserting his victory. It looked like a drunk, spoiled brat from Southern California destroying his parents’ home.

As magnificently repulsive as the party itself is, the denouement is just, well, repulsive. Thomas’ party has inadvertently destroyed his house and his neighborhood, obliterated his parents savings, and generally turned him into a scummy guy. But it’s totally ok, because he’s popular now! Plus the girl he likes still likes him, even though he hooked up with someone else in a drug-induced haze. And his father literally pats him on the back for having so many people at his birthday party. It’s all good, man!

It’s a weird moral at the very least, but that’s the fantasy behind “Project X”: not that a nerd could have the craziest party in history, but that you could destroy an entire suburb and get away with it. You could be revered for it, loved for it, re-made from a drunken little piss-ant into a god of hedonism and destruction. And maybe it’s my shrewishness rearing its ugly head, but bro? That is not cool.