“Hope is the thing with feathers

That perches in your soul

And sings the tune–without the words

And never stops at all.” 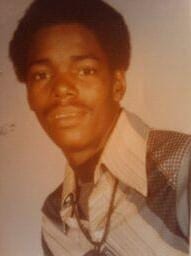 Cornelius Dupree as a young man

You were two months into the age of 20 at the time.

It was November 23, 1979 and a young Dallas couple was robbed and carjacked in a liquor store parking lot near Interstate 30 by two black men. The man is forced out of the car on the highway and the perpetrators drive off with his girlfriend. The 26-year-old female is raped at gunpoint. Her fur coat is taken. A week later, you and your friend are stopped while walking to a party two miles from the site of the incident. Both of you fit the general description of the abductors and your friend is carrying a handgun similar to the one used in the crime.

The Dallas Police Department thinks you look like a rapist.

You’re now in custody. You’re identified by the victim. You can’t afford a prominent lawyer that has the skill to get you a fair trial. You are sentenced to 75 years in prison. You are a sex offender. You are 21-years-old

You are also innocent.

You spend years angrily getting cases written up and blindly fighting. You want answers. You don’t get them. You realize that if you ever want to get out you have to change your conduct. That anger. That passion. That hate. It is hurting your family. It is hurting you.

You get rid of it.

Six years after being convicted you start going to church. God sets in. You reevaluate yourself. You stop swearing. You learn things from a different perspective. You don’t drink. You don’t smoke. There is a slow-seeping catharsis. You are patient. You are gracious. You are positive.

You meet Selma through a mutual acquaintance. She believes you. She loves you. Other people say they’re innocent, but how can one know? There’s something about you. She stays by your side, she supports you. It means the world to you.

You are a man.

The age of disco and funk has evolved into boy bands and rap metal. It is the late 1990s. You are constantly working on the case, writing people and organizations to try to get released. You are denied parole because you wont admit to being a sex offender. You aren’t a sex offender. It has been nearly 20 years. Half your life spent in prison.