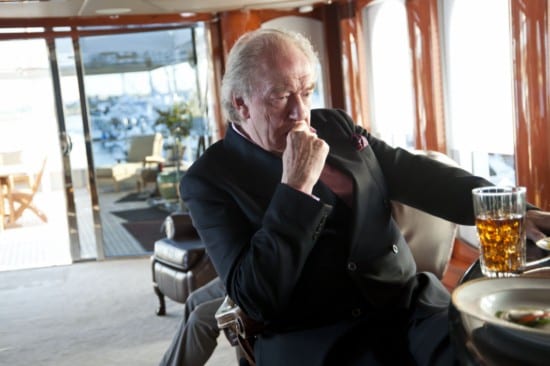 The nefarious and mysterious Michael (Michael Gambon) unnerves adversaries as he downs a morning scotch.

The spinning coin that appears beside the title, as Massive Attack’s “Splitting the Atom” hypnotically thumps in the background, is a carefully and ingeniously designed metaphor. Exemplified in tonight’s episode, the “Luck” universe is really not about chance at all.

It’s about chances, plural. It’s about whether we choose to take the opportunity that is handed to us, or whether we squander ourselves by returning to what is familiar and simultaneously destructive. Sometimes it’s abundantly clear what the better choice would be, which life lifts us up out of the doldrums. Other times, we just have to trust that by altering our perception of what is, we invite the possibility for something extraordinary.

The duality of a coin flip is mirrored in the duplicity of the characters. A slew of our major players are given opportunities and possibilities (these week’s key terms, save them for the final exam at season’s end), forks in the road that might change their station, but instinct and fear of incalculable risk steers them in the direction of what feels comfortable. Gus puts it succinctly. America is “the greatest f***ing country in the world.” But it’s only as great as we make it. Milch, the television auteur that drives this show, seems to be a big believer in the American experiment, but through his tragicomic gamblers, his brooding gangsters, his temperamental trainers and jittery jockeys he conveys how it hinges upon the initiative of those who partake in it.

Ace has never held issue with self-reliance. However illegitimate his rise may have been, he made himself who he is. And he’s just as hellbent on restoring his reputation, and evidently ruining that of his “colleagues.” Armed with his new shaking-in-his-boots derivative expert for hire, Nathan Israel, Ace sets out to meet with the majority track owner while sending his errand boy to meet with his “associates” (the only way to describe the unstable relationships he has to these businessmen is with quotes, I’m sorry). The track owner grants him a piece of the pie, but he’s catching the vibe that the track will serve as a stage for a vengeful scheme. But Ace seems to revel in the suspicion because all it does is keep those involved on edge, paranoid. Also privy to his ulterior motives is his parole officer, who wonders whether his good mood is contingent upon how close he’s coming to dolling out comeuppance and how much of it is inner peace. Ace claims it to be both, but to be two things in the “Luck” universe is to force a decision to pick one.

We’re introduced to Joey as he continues to blubber about the dreck that constitutes his life. He is client-less, and garners no respect. Whoever Lynn is to him, she’s neglected to return his calls and there’s no one whom he could name that would miss him. Consequently, Joey reaches for his pistol after a morning shave and shakily points it at his temple. Here an assertion of divine intervention presents itself as a small-scale earthquake that rips through town. Though it doesn’t affect the horses, it provokes Joey to drop his gun. He trips the trigger, however, upon release. The ricocheting bullet eventually tears through Joey’s face. After receiving treatment for his wound at the hospital, he discovers that the bullet left an even more indelible mark than a scar: his stammer has disappeared. Though we’ve largely viewed Joey through pity goggles, and found him deplorable because of his leech-like quality of feeding off the successes of others, we’ve found little reason to root for his redemption. But damn if it wasn’t gratfiying to listen to him repeat, “Hello, my name is Joey Rathburn” and recite the instructions on his shirt tags.

Many confrontations with new ways of being happened at the track as well. Moments of triumph are undercut by scrutiny as our jockeys deal with the rigid requirements of what it means to win. Leon is allowed to ride Mon Gateau again; and if he makes the most of it, it could become a permanent gig. Gateau gallops to victory as expected, but Leon’s handling of the horse is put under inquiry when he bumps another one making his way to the front of the pack.  If it’s determined there was intent, the win would be nullified. When the judges asks Leon for his take, he’s at a loss for words. He doesn’t help his case. Thankfully, the replay is inconclusive, unable to prove that Gateau gained a competitive advantage since it didn’t alter how the horses finished. The win is solidified, but Escalante reminds Leon to thank his lucky stars.

Rosie has earned her spot as Gettin’ Up Morning’s jockey in Walter’s eyes, but she almost gives him reason to regret that decision when she uses the whip, defying Walter’s direct order to sit still. Walter’s disappointment is even more pronounced because Morning’s six-length victory captures the attention of track officials who believe a star may be rising before their very eyes. Rosie’s apology is later accepted, as it’s clear her level of remorse is sky-high. She was just so consumed with the will to win that she needed to ensure it, but she acknowledges she should have trusted him and the horse.

Our four degenerates provide the comic relief between these peaks and valleys as they too adjust to the spotlight upon them…well, as they perceive it. Hilarious lines like Marcus’ quip in response to Renzo, worrying that the horse may have suffered a trauma from the earthquake, “Yeah, how would we know, unless the horse keeps a journal.” And Lonnie had me in stitches when he gazes at a statue outside Santa Anita and marvels at its sculpted genitalia, “They actually gave it brass nuts.” They revel in Gateau’s controversial win and Marcus hacks up his lung during the victory photo. Milch often treats these guys like his four stooges, but there’s an innocence to them that keeps them from being a laughingstock. They go about their business with no intent to harm others, only perhaps themselves, as they chase the next high. Ownership has given them an opportunity also, to get more out of these races than the payout. Their bond with the horse and each other strengthens each time Mon Gateau crosses the finish line.

Not everyone responds to their chance to grow. After their displays of affection in the barn last week, Escalante returns to his cold and distant treatment of Jo, mocking and undermining her at every turn. When she tries to apologize for questioning his harshness in dealing with a grieving employee, he doesn’t accept, and Jo walks away cursing him and the way he treats her and others as means to an end. Under her breath, she reveals the sad truth that she’s “knocked up,” and it’s a stinging realization. The way he discards her attempts at connection, we might be in for a painful decision on Jo’s part.

Others, try as they might, just can’t shake their old habits to make room for new selves. Joey’s stammer comes back the next day when he returns to the track and is teased mercilessly by Ronnie about the bandage on his face. As he starts to own up to his attempted suicide, the impediment returns. The implication is that by returning to the root of his shame, he’s forfeited his opportunity to start anew. The disappearance of his stammer was a preview of what could have been, but instead of capitalizing on his new self, he used the confidence to return to his old haunt. I’m not sure if Milch meant to suggest God’s will in this act, but at the very least we now know there are tangible consequences if one refuses to change.

Ace also resists, but not for lack of effort. With all his stars aligning, Israel planting a seed in Mike’s head about the Indian Gaming Lobby being in Ace’s pocket, Pint Of Plain poised for prominence, and a pleasant evening with Claire, it suggests to him his stock is rising. Claire even serves as the series’ mouthpiece, telling Ace not to be afraid of “everything that could be.” She sees the profound affect the horse he affectionately calls “Irish” has on him, proving to her that her organization has a worthy cause (of pairing ex-cons with retired horses). She’s sees that he’s better than the three-year sentence he served. I even gathered that Ace is not proud of who he is/was. But when Gus falls asleep as Ace begins to voice his newfound optimism, he retreats to his familiar home, anger. He bitterly asks Gus to leave and in his futility he stares into the camera (a cheesy directorial choice, but when it’s Hoffman, it works) and grunts, “What is f***ing wrong with me?”

Exhilarating races, sharp writing and compelling characters have become almost givens by “Luck’s” sixth week. What made this week exceptional for me was how singular and yet how all encompassing the message was. Often times, artists fear directly conveying “points” because it overshadows the nuances of performance and verisimilitude with a sermon-like preachiness. But I never felt once like my hand was being held. The more obvious instances of opportunity didn’t even spell it out for me, they just resonated so deeply in my own reservations about change and risk-taking that I couldn’t help but identify with Milch’s vision. Also to the show’s credit, these stories were not hastily constructed vignettes, contrived for the purpose of telling a simplistic moral about being “open to trying new things.” These head-on collisions with their intrinsic natures have been brewing since we met them in the pilot, and they just can’t run from themselves anymore.

Episode Six was complete with miracles, disappointments, consequences, rewards and punishments, budding friendships and destructive dependencies, glory and shame. For such a wonderfully whole set-up to the final third of the season that will likely reward us with the full purse, I answer Dustin Hoffman’s direct address with a resounding “Nothing,” you’re a near-perfect portrayal of just how rife with imperfection humanity is, and how we flourish in spite of our selfish knack for sabotage. A.