California-based rapper/producer DJ Quik just released “The Book Of David,” his eighth album. The title comes from his real name, David Blake. As such, there is a personal concept through the album. 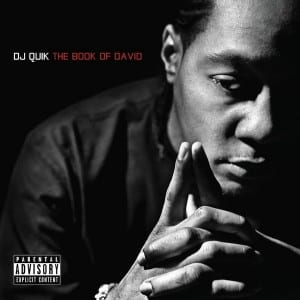 The album kicks off with an elegant intro track “Fire and Brimstone,” backed by jazz piano melody lines. Therhythmic track “Do Today” sounds dreamy and sharp simultaneously since funk music really helps the rap be outstanding and vivid. “Killer Dope” has the same effect, the combination of hip hop, funk, and sort of jazz is the huge factor.

As one of the guest singers, Jon B. does an excellent job in the album. He participates in several tracks, particularly “Real Women,” the second single from the album, which significantly highlights his soulfu

l vocals. As he beautifully hits the high notes along with solid rhythm, the track gives the listeners a sense of excitement.

A fun tune “Hydromatic” combines effective dynamics throughout the track; its dramatic and entertaining.

With straightforward strong lyrics, “So Compton” definitely has a similar vibe to 90’s Hip Hop.

The last track, “The End” is extremely groovy with Garry Shider’s guitar. The tune is somewhat reminiscent of  Sly and the Family Stone. The first part consists mainly of a bunch of vocals, then DJ Quik is gradually dominating the tune with his powerful rap.

The creative album gives listeners a new perception of West coast rap by serving hip hop as its main dish with a lot of other music condiments to taste each track. It definitely has something unique.

12. Boogie Till You Conk Out (featuring Ice Cube)