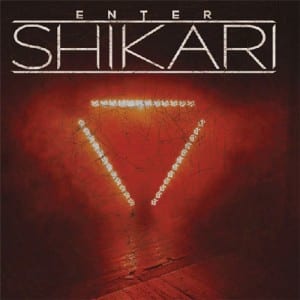 The first time I heard an entire Enter Shikari album, it was during a particularly long drive to Las Vegas with no air conditioning and the driver was going exactly 55 miles per hour. It was their first album, “Take to the Skies.”

We had heard about a UK hardcore-ish band that included techno beats and had the synth on the front lines of their song writing; as opposed to the bands we were used to—Underoath, Chiodos to name a few—that had the synth merely as a backup, sometimes so quiet you could barely hear it. During that six-hour drive, we were introduced to songs like “Mothership” and “Anything Can Happen in the Next Half Hour.” Suddenly we no longer cared that our driver was going unusually slow.

On our third loop through the album, while screaming out the lyrics, we realized we were hooked, and we’d never look back. We gobbled up everything they put out. Went to all the shows, followed their past, their present and their future.

When you’re truly obsessed with a band, there is always a slight suspicion that their next album won’t be as good as their first and, just like every other band, will become just another corporate Avenged Sevenfold type, selling out amphitheatres and opening up for a monster truck rally.

Enter Shikari (translated: Enter the Hunter) then dropped their second album, “Common Dreads,” broadening our horizons with heavy tracks such as “Solidarity” and “Step Up,” and showing that they can keep us on our toes with songs like “The Jester” and “Juggernauts.”

We listened to that one over the phone, commenting on the album’s unpredictability and their balls out approach—no track sounding like the other.

It’s present day and Enter Shikari just released their third album, “A Flash Flood of Colour.” Before we could even begin the question “Have they peaked?” we were hit with the opening track “System…” where lead vocalist Rou Reynolds shows he isn’t just a typical screaming/singing front man. He gracefully spouts a poem, seemingly about the connection between our inevitable downfall as a human race and a house on the side of an eroding cliff. “There was a house in a field on the side of a cliff, and the waves crashing below were just said to be a myth. So they ignored the warnings from the ships in the docks, now the house on the cliff is the wreckage on the rocks.”

As per Enter Shikari’s usual, each track blends together, and “…Meltdown” hits, building an enormous synth breakdown, promising us “This is gonna change everything” and by the time the chorus hits and you hear “Fuck all borders and fuck all boundaries. Fuck all flags and fuck nationalities” you realize they fulfilled that promise.

Each track unveils more and more of Shikari’s belief system that we’re purposefully divided, flawed and scarred as a society, searching for answers in history books, which they say are “just regurgitated lies” written by the corrupt, the pigs, the snakes. Each track goes deep in the crevices of their belief that we can save the world by becoming a unified planet, becoming one. The opening two tracks end with the line: “Fear starts to vanish when we realize, that countries are just lines drawn in the sand with a stick.”

“Sssnakepit” lets up little, sticking to their old tricks with a ripping two-step verse, a gang sing-along chorus and a stomping breakdown. ‘”You’re not gonna believe this, you can’t perceive this…this is like nothing you’ve seen before,” once again, a promise left fulfilled.

The general consensus after a full, straight-through review of “A Flash Flood of Colour”? Everything got better. The band reaches monumental heights in this album. Guitarist Rory C, rips it up with unconventional, sweeping riffs, running the gamut from heavy Pantera-like sounds in “Search Party,” to grindcore-style sweeps in “Gandhi Mate, Gandhi.” And if that’s not convincing enough, just listen to “Warm Smiles Do Not Make You Welcome Here” where he puts his heart and soul into a two-minute-long solo of sorts where…well, I won’t give away the ending.

Drummer Rob Rolfe, my personal favorite member for his stage antics, makes sure no one doubts his abilities as he serves up blast beats in “Hello Tyrannosaurus, Meet Tyrannicide.” His best song without a doubt is “Arguing with Thermometers” where he doesn’t skimp on the crash cymbal during the breakdowns, and keeps it jazzy during the chorus while Rou tells us “We’re all addicted to the most abusive and destructive drug of all time.” And he’s not talking about Class A’s…“That business is miniscule when compared.”

Bassist and backup vocalist Chris Batten rounds everything out as usual. Making sure the breakdowns are heavy, and the melodies stay sharp and catchy. He has a backup vocal in just about every song (My personal favorite is “It’s not too late, it’s not too late” on “…Meltdown”).

Each song can be pointed to as the best song they’ve made to date, each one being so fiercely different than the next. From the mellow sing-alongs in “Search Party,” to the fast paced technicality of “Pack of Thieves,” the band never lets us breathe until the end of the album. In their final song, “Constellations,”—which is part poem, part symphony—they encourage us to break all norms and boundaries until we can “explore space…together, forever.”

The album immediately shot to #1 album in the UK when released. Yes, #1 album in the UK. Not #1 independent album (though that’s also true), not #1 rock album (also true), but #1 album. Straight up. On their website, www.entershikari.com, Rou Reynolds writes (in regards to whether they’ll stay at #1 for any amount of time): “I don’t know whether we’ll be holding strong by Sunday when the end of the week run down happens. In fact I’m sure Adele or Bruno Mars will have crept back up on us by then and achieve their 50th week at number one or whatever they’re on. But we’ll have had our nice brisk trot in the limelight, and big up all those that contributed.”

Which seems, again, like they fulfilled the promise they set in “Pack of Thieves”: “Don’t be fooled into thinking that a small group of friends cannot change the world.”