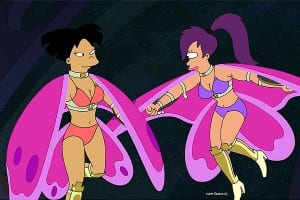 The Wingnuts, Amy and Leela, competing in the Butterfly Derby

Well, I’m no longer a first-time Futurama viewer! In fact, I’ll now be covering Futurama for the rest of the season, so I only ask that you bear with me if I miss running jokes or ask rhetorical questions that have been addressed in the show before.

Tonight’s episode focused on Leela, who I knew from last episode, and Amy, a character completely new to me. The two of them get involved in a futuristic sport called Butterfly Derby when they bring supposedly stolen moon rocks back to the moon. A local man offers to show them the “real” moon culture, and brings them to the Derby.

The sport turns out to be a flying female version of today’s pro wrestling matches, though here, contestants pair up to fight against another team in midair through the use of giant butterfly wings attached to their arms in the low gravity. Does Futurama have other fun spins on modern sports? I’m intrigued. Anyway, Leela and Amy face off against the formidable Murderflies when the emcee calls for volunteers for the “amatuer flapdown.” Even though they lose, he offers to have them become his new team, and they accept.

Leela and Amy call themselves The Wingnuts, and they’re terrible: “Well, we lost to all our opponents, even that team that turned out to be us in the mirror,” Leela says in the locker room. Amy wishes there was some way to enhance their performance in the arena, and just like that, a coach peddling nectar, an “all-natural” performance enhancement supplement, comes onto the scene.

Leela hesitates at first, but Amy calls the coach’s disposable cell phone the second she gives them her number (and while she’s still standing two feet away). They can either drink the nectar or inject it between their toes, but they’re not to worry—it’s all natural. Yeah, I wonder how many times that’s been said in professional locker rooms. The Wingnuts become her newest customers and are instantly transformed into highly jacked, deep-voiced athletes.

Back at the office (Although it seems to me like it’s also a laboratory and peoples’ homes—is that accurate?), the rest of the gang is watching a news story about the dangers of nectar. Despite being about a thousand years in the future, one of the anchors is still a pretty blonde human woman—big surprise.

Leela and Amy have become rather aggressive from their “enhancement” use, and their friends feebly try to get them to stop. Fry unsuccessfully asks Leela out on a date while she’s at the gym, and while watching their latest Derby match, Amy shouts down Kif, the small green alien assistant to Zapp Brannigan, when he compliments her on her use of the flying folding chair to take down her opponent. “It’s not easy being a Derby wife,” Fry tells Kif, who I guess (and it’s later confirmed) is Amy’s boyfriend. It’s really interesting to me that the dating on this show takes place across all species. Do robots date outside the robot “species” too?

The Wingnuts have become such a formidable team that they’ve moved on to the championship round, where they’ll face off against the Murderflies, the current title holders. After a spinning Wingnuts logo, a la old school Batman, we learn that the Murderflies have bought up all of Leela and Amy’s nectar supply.

As it turns out, the nectar comes from flowers found on Kif’s home planet, so Professor Farnsworth (Fun fact: Philo Farnsworth, who must be the inspiration for the name, is the inventor of the first electronic TV) suggests they take a trip there to get their own. After a landing on the marshy planet that brings to mind The Empire Strikes Back, Fry, Kif, Leela, Amy, and Bender are warned by a mysterious park ranger about the male butterflies. It’s mating season, and the males—identified by their orange coloring and “enormous butterjunk”—can get aggressive.

The group splits up, and while Leela and Amy gorge themselves on a direct supply of fresh nectar, the guys run straight into a giant male butterfly. Bender is all set to hit it with his butterfly hammer, but ducks his head into his body when the butterfly attacks, allowing Fry to get sprayed with the bug’s pink goo instead.

Since it’s getting late, Kif suggests they all crash at his parents’ place. His parents are two buzzing clusters of green flies, which is endlessly confusing to me. Did they used to look like Kif, and they degenerated into clouds of flies as they aged? Or were they always flies? And if so, how in the world did they make Kif?

That’s not the important part, though. Leela finds herself drawn to Fry’s new butterfly-inflicted smell, which everyone else agrees is horrible. In an effort to prevent any “hanky panky,” Kif’s parents have everyone sleep in separate rooms. Leela of course sneaks her way to Fry’s bed where she finds him already entangled with Amy!

It was at this point that I guessed it was butterfly pheromones from Fry’s confrontation with the giant male insect, but it was still fun to watch the chaos play out as Leela and Amy fought over Fry, alternating between each tugging him towards themselves and kissing him together. Fry doesn’t seem too upset about these circumstances, I have to say.

Back at home base, Professor Farnsworth explains: the male butterfly did, in fact, spray Fry with powerful pheromones, and since Leela and Amy have been ingesting copious amounts of female butterfly hormones through the nectar, they can’t keep their hands off him. Again, Fry is not mad about this, but the girls decide they need to quit cold turkey, especially after Fry starts feeling “caterpilly” and crawling along the floor.

Leela and Amy suffer through withdrawal and recovery in a manner of about a minute, while Fry slowly cocoons himself off the wing of a spaceship. Unfortunately, Leela and Amy have lost their power just as they’re about to face off against the Murderflies in the championship. The stakes are raised for the final round—the floor opens up to reveal hot lava, instant death for Derby contestants knocked out of the air.

Leela and Amy give it their best shot, but the Murderflies are hopped up on nectar, and they manage to tear a wing off each Wingnut. It looks like certain death for Amy and Leela until Fry bursts out of his cocoon and into the arena. He’s been transformed into Butterfly Fry, which is actually a little creepy—he’s all big bug eyes, mouth pincers, and exoskeleton, but with a human head.

The Murderflies’ nectar-fueled instincts take over, and they fly up with Fry to partake in mating season, right there in the arena. A little weird, but at least Amy and Leela make it out of the Butterfly Derby alive. They take Fry back to the lab, where his butterfly exterior cracks open and falls off, revealing a shuddering, moaning, completely human Fry inside. I’d be a little traumatized too, if I had just survived being turned into a giant bug.

This episode wasn’t as funny for me as last week’s, though I think that has a lot to do with feeling disoriented with the characters; I don’t even know some of their names yet (Next time I’ll know more, promise!), but I know I like the style of humor. A lot of the jokes are subtle, and I like that the show often operates on two levels. Certain visual gags only work if you know what the reference is, but not knowing doesn’t detract from the show. It’s a good balance, and I’m excited to get to see more of the Futurama universe for the rest of the season.

Favorite Lines from “The Butterjunk Effect”

“This is hard! Now I know why butterflies are always so grouchy!” – Amy

“She doesn’t even want to cuddle any more, she just wants to hit me with various chairs.” – Kif

“Bender, no! That park ranger explicitly gave us a vague warning!” – Kif

“Ladies and gentlemen, I am so sorry for allowing this lurid sex act to taint an otherwise delightful day of family-friendly violence.” –Derby commissioner Abner Doubledee