This past weekend, Augustana visited The House of Blues in support of their most recent album, Life Imitating Life. We caught up with Daniel Layus prior to the show for a chat about the past 3 years, his future plans for the band, and more.

BLAST: First off, how has the tour been so far?

DANIEL DL: The tour has been great. I really couldn’t be happier about it. The response all around has been fantastic. Tons of people have showed up. It’s exceeded all of my expectations.

BLAST: How would you say the new record is different from the previous record? I know you’re on your own now as far as the band goes.

DL: I mean it was recorded very differently. Normally I had a proper band that I did everything with, this time I hired a few select people but I did a lot of it myself as well. It was a really interesting process, I accepted the challenge and I dove headfirst into it. I’m really proud of it. I really love the record.

BLAST: Do you have that same group of people touring with you?

DL: I have different guys out on the road now. I had a proper band, 4 or 5 us, for about 10 years we were all together, but then we sort of disbanded a few years back, after The Maine tour, actually. We sort of parted ways creatively and as a band, but kept together as friends and kept good communication over the years. Everybody’s really great. I hire different dudes out here but they’re all good buddies of mine, they’re great players, and they really respect what the fans want to hear and they play things the way people would like to hear them, which is nice.

BLAST: How has it been having Twin Forks out on the road with you? 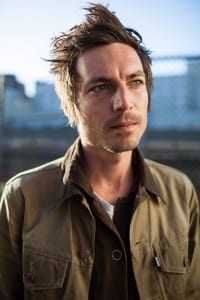 DL: It’s been great. I opened for Chris years ago, maybe twice. At least once. He’s got this new band, which is fantastic, so it’s been really good to get that music in front of our fans. I think they really appreciate it and I think they connect with the music as well. I think what he’s doing is fantastic. We come from a lot of the same influences.

BLAST: Who would you say your main influences are?

DL: It varies over time. You go through certain phases and you get influenced in certain ways about different things. I mean, sometimes you’re more influenced by somebody’s live performances. In particular, I’m very influenced by Bruce Springsteen or Joe Cocker in a live setting. There’s more writing and performing type influence as well. I think on this particular record I was streaming a lot of Peter Gabriel and Amy Mann.

BLAST: Speaking of live [performances], one of the questions I had from Twitter was “Do you have any plans to do a live album at any point?”

DL: I would love to. A lot of that is just a matter of logistics and finding the right space and the right room and the right night to do it. There’s different ways to do it, I’d prefer to do one show.

BLAST: I think it’s a lot easier to listen to when you’re hearing one show.

DL: Yeah, I think one show that sounds consistent is more appealing to the ears and a little bit easier to work out the kinks. But yeah, that’s something I’ve wanted to do for years. So I would look out for it, sometime in the next year or two most likely.

BLAST: Another question that comes up a lot on Twitter, from one of your fansites actually, “Do you have any plans to go overseas to play shows?”

DL: Oh man, it’s like the live album. I’ve been dying to go out there since I started a band, since I was 17. It’s been 12 years and we’ve never gone over there. We went over a really long time ago for these quick label showcases, but it wasn’t a tour. We’ve never done a proper tour. I would love to get out there. It’s a little bit difficult to coordinate all of that, but if we could find the right way to get over there, it would be a great experience. We’ve got to play London and Paris, Dublin and Manchester.

BLAST: There was a question [from Twitter] about a couple of unreleased songs – “New Morning,” “Comeback Story,” and “Clementine.” Are there any chances of those ever being released?

DL: “Clementine” – that one goes way back. I don’t think that’ll ever see the light of day beyond YouTube. It’s cool that YouTube exists because then people can indulge a bit in the deep, unreleased live cuts, they can go find that stuff. Comeback Story – It sounds weird, but it didn’t quite fit into my vision for this record, although it was a part of the fabric of writing the album. I didn’t feel that it fit this particular 10 songs. It will continue to be played live and it’ll find its way out there somehow. “New Morning” is another one that somehow it’ll get out there. Most likely what I’ll do – Every once in a while I just kind of put something up on our TwitMusic account, which is just linked to our Twitter. That’s a really easy way to just jump over there and stream or download the song. I just allow the songs to be downloaded. I put some stuff up there sometimes, some home recordings and things like that. That’s always a way to keep everybody refreshed and new material coming out. I could always put it up on there.

BLAST: What keeps you motivated as far as writing and playing music? I know being away from home is probably not the greatest – how do you stay connected?

DL: I used to feel a lot more begrudging out on the road. I used to feel a lot more angry about being gone all of the time than I do now. I’m more sad than I am angry now when I miss my family. You know, I have a wife and 3 kids and it’s very difficult for all of us, but at the same time, I do get to spend a ton of time at home, which is amazing. It is hard to balance those few months that I am gone out of the year, but everybody gets by and we all miss each other. I’m a lot more aware now of really how special it is to be able to show and have all of these people at The House of Blues just wanting to listen to my songs. That’s something I took for granted for a lot of years and I really, really appreciate now. That also is an added motivator. I don’t need much motivation anymore to get up there and do it. These people are just incredibly passionate about the music. That’s more than a guy could ask for. It’s incredible.

BLAST: How did you get into playing music? (That was another fan question).

DL: My parents got me an electric guitar when I was 10 and I loved it right away. They got me guitar lessons and wanted me to learn how to read music and all this stuff. All I wanted to do was put on Nirvana and Green Day albums – back in the 90s that’s what it was all about – so I just wanted to learn how to play those chords. Then as time progressed I started getting into stuff more like Oasis, Counting Crowes, Toad The Wet Sprocket, Gin Blossoms, and that side of things. That kind of my developed the early process of wanting learn how to sing and play at the same time. That took me a few years in my high school years to figure out. Then by the time I got to college, I wanted to start writing my own songs and then that was the beginning of all this.

BLAST: Are we going to have to wait another 3 years for another record?

DL: I hope not. And it wasn’t the plan to wait 3 years between all of these records. We’ve been on a 3 year record cycle which has just been horrendous. I hate waiting that long. It was not the plan and certainly wouldn’t be the plan in the future. Things can get complicated when you get tied up with record labels and things like that. It’s stuff that I don’t like to think about and talk about, and fans don’t like to think about and talk about. Unfortunately sometimes it’s part of why things get pushed back or why things are tied up. There’s obviously a lot of examples – Bruce and Tom Petty – of people that have sort of been held back on account of those things. If I could I’d love to turn out a record every 18 months. That would be great. We’ll see if I can keep more on that pace and then keep coming out and doing tours at least once a year.

BLAST: Do you have anything coming up this summer?

DL: No plans right now for Augustana. Potentially something this Fall, but [I] don’t know yet. It depends on if the demand is there. If people came out and they’re all set and they saw the show and they’re like “Okay, we’re good,” then I’ll be like “Alright, we’ll come back next year when we have a new record or something.” We’ll see. If it keeps growing the way that it is, which is shocking to me, I’ll happily come back anytime.