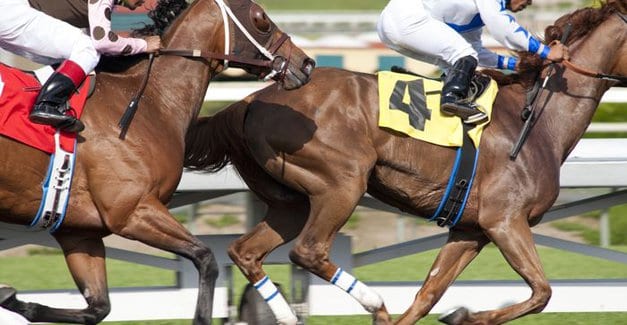 Enjoy a day at the track as David Milch's latest HBO drama, "Luck," takes you deep into the thrilling world of horse racing.

When do you know something is art? How do you distinguish smart storytelling from the lazier narratives. And why does the disconnect between mainstream audience engagement and critical appreciation exist, and how can it be bridged? These questions arose immediately, for me, as the end credits ran after the series premiere of HBO’s new drama series, “Luck.” Created by David Milch, creator of former HBO success, Deadwood, and co-produced by Michael Mann, acclaimed director of films such as “Heat,” “Collateral,” and “Miami Vice,” (and frequent director on the ’80s TV show of the same name) the show centers around horse racing and the various characters that the sport breeds and attracts. Entering this world, I was weary of the culture shock, the little-to-no proficiency of the vernacular, and the little investment I had in the problems of old, white gamblers. Predictably, as I’d been foretold, none of this mattered. Most of what I could nit-pick about has more to do with my obligations as an attentive viewer than it does with any of the technical aspects of this masterful artwork.

Over at the The AV Club, expert TV critic Todd VanDerWerff spoke in his review about experience vs. understanding. Traditionally, when we watch anything, movie or TV program, we try to comprehend the symbols we are given. Whether we’re interpreting a particularly arresting shot selection, a gripping snippet of dialogue, or a peculiar expression on an actor’s face, we’re attempting to make sense of what we’re being presented. Now this act of analysis is not mutually exclusive with experience, but often it can impede our ability to fully immerse ourselves in the sensory pleasure of viewing. But if you so choose to indulge my requests, and the whims of HBO, and you do watch the magnificent first episode of “Luck,” do yourself a favor and shut down your noodle from the opening theme (the unmistakably cool “Splitting the Atom” by Massive Attack) to the last frame. It’s almost like mindless sophistication. No notes were required for me to churn out this review because while there was plenty of plot to sift through, and a lot of legwork is done to introduce us to the characters that inhabit this environment and the channels through which they are connected, the grandest accomplishment of the hour are within two minutes bursts where few words are spoken, because articulation diminishes the visceral thrill of the moment. I’m talking about when those exquisitely statured beasts compete with every ounce of muscle they possess to cross that line first. I’m talking about the horse races.

Simply stated, horse racing, much like boxing is an ancient artifact, a relic of a different time where one could afford to be bothered with such trivial activities as watching animals run around a circular track. But there’s no denying that whenever the Kentucky Derby is on, or even the Belmont and Preakness Stakes, I actively tune in for those two minutes. For that fleeting instance I’m entirely absorbed in whose nose will come out in front, and its unfair to the integral majesty of the horses to explain why. When you see a beautiful woman or man, do you stop and ask why they struck you? When a sunset stops you in your tracks as walk toward the horizon do you disengage to question it? No, you absorb the feelings it evokes until it overwhelms you. These brief glimpses don’t mean anything, and yet they say it all. They are the purest images we see because they aren’t tied to a consumptive or indulgent exercise, they are just part of living. In the world of art we call it transcendence: when an image, a phrase, a brushstroke, or a note impacts you not because it told you something, or what it meant, but because it did nothing, and it just was.

And yet working in concert with such sensual exhilaration, there is a story being told. Dustin Hoffman is the big ticket, starring as Chester “Ace” Bernstein, a man in his 60s who is being released from prison after serving three years. His crimes are never explicitly defined, but one assumes gambling or financial irregularities of some variety did him in. Dennis Farina plays his pal Gus “The Greek” whom Ace admits is the only man who “gets a pass” in terms of his trust. Ace is returning to the world of horse racing through Gus, who is serving as a front for Ace’s new horse. Also introduced is a trainer, Escalante (played by John Ortiz), who muddles the plot even further with his thick spanish accent (another character refers to facetiously as a thick Irish brogue). We also spend a considerable portion of the episode with four degenerates, Jerry, Marcus, Renzo, and Lonnie. This mangy crew spends the episode trying to capitalize on the track’s jackpot of $2.7 million, which is earned when at least six of the eight races are picked and no one else picks all the same horses. They used their various insider tricks along with suspect cash flows with which they placed their bets. I won’t lie to you, if you have no working knowledge of gambling or specifically how to play the ponies you will be confused, but the beauty of it is you’ll never feel disengaged. The stakes are clear. Win, you get paid. The emotions are so clearly displayed upon the actors’ faces you’ ll be tensing up along with them as the horses near the straightaway.

Lastly, we meet Nick Nolte‘s grizzly, worn-down Walter Smith who shares an intimate relationship with his horse. He lays back in his lawn chair and reminisces with the colt about its father and how magnificent a runner he was back then. This nostalgic feel permeates throughout the pilot as we gather that Ace is mindful of who he once was too, and his unchecked temperament suggests that he is bottling up some resentment towards those who might have done him in. He exits vehicles with a bravado emulated only by gangsters and hot shots. Perhaps his time is gone, but he sure strides like he still owns everything he surveys, or at the very least, he could.

Fragility and frailty are also intrinsic in the happenings of the pilot. We see up-and-coming jockeys trying to make names for themselves knowing that they and the horse must sync up perfectly or else they fall short of the magic necessary. Defeat is just as expertly rendered as victory, particularly when one horse snaps his leg mid-race and is subsequently put down. When the young jockey speaks of the light leaving the eyes of the horse as it passed you feel as though it wasn’t your a regular at the track because the ups and downs are so genuine that it just can’t be your first go-round, it hits you so deep.

The pilot isn’t perfect. As mentioned there are many instances where a conversation zips by and you’re likely to only extract a sentence or two. It’s enough of a working knowledge so that you can stay aware, but you can’t help but feel like you missed something. Michael Mann, however, doesn’t miss much at all as he captures every last detail of life at the track. Whether it’s the steam rising from a horse’s hindquarters, or the way the gate is assembled and operated in preparation for the horses to be stabled inside. Nolte and Hoffman cement themselves as quiet giants that could unleash wrath at any moment they are so indelibly tied to this life, and Kevin Dunn as Marcus exudes an intellectual confidence you’d expect at a Fortune 500 board meeting, not at Santa Anita placing bets. As far as HBO pilots go, this one is fairly typical in that the initial installment doesn’t set the table with exposition, more screen time is spent setting the mood while constructing a unique world, aiming to also evoke the overarching themes and visual stamp.

I haven’t quite comprehended what “Luck” is trying to say to me. Honestly, I heard very little. There were quips that made me laugh aloud, fearing I’d wake my roommate, and there were open-ended statements that laid before me like an undisturbed corpse, but then I walked right along awaiting the next infusion of adrenaline to burst out onto the track. So, do I know what “Luck” is will add to the pantheon of visual novels that HBO has contributed throughout the past decade (The Sopranos, The Wire, the aforementioned Deadwood? I have not a clue. But I get it, I dig it, and I want me some more. There aren’t many things in life that I can just do and I’ll feel at peace. Watching “Luck” is going to be one of them though, that much I can tell you. If this show can continue to provide the indescribable rush of a horse race in hour-long strides, then it will hit the jackpot. But for now, it’s an A-, by a nose.