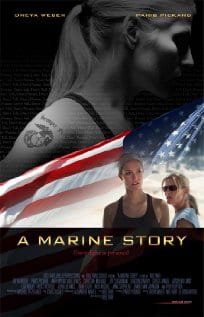 “A Marine Story” is an important movie in one respect: it humanizes the struggle of homosexual men and women in the United States military who want to serve but must keep their sexual preference secret. The film was released in 2010 and was a festival/indie hit. Even though the military’s “Don’t Ask, Don’t Tell” policy is now defunct, “A Marine Story” succeeds in dramatizing what so many men and women had to undergo all the years DADT was in effect.

The movie tells the story of Alexandra Everett, an accomplished and decorated Marine, who is discharged under murky circumstances. It seems she was drummed out of the military when allegations of homosexual behavior emerged. She returns to her rural hometown, where everyone believes she was honorably discharged. The town also believes she is married. Only near the end of the film do we learn her marriage is a sham, a cover so no one suspects her of being gay. Upon returning to the town, Alex is asked by a policeman friend to mentor a troubled girl, Saffron. The town has been overrun by ‘meth’ related crime, and a judge has given Saffron a choice: she can go to jail or join the military. Alex is tasked with preparing Saffron for boot camp. The training relationship storyline between Alex and Saffron competes with Alex’s struggle to remain closeted both in the present and –told in flashbacks– while in the military.

I do not believe “A Marine Story” was in theaters, but it is available on DVD. It is a movie that should be seen, but I’m not sure it succeeds artistically. It’s a message film and there’s certainly nothing wrong with that, but, as with many message films, the message can overshadow the ability to enjoy it as a work of art or entertainment. That’s why I led this review with the notion that it is “important” to see this film. It’s important to see “A Marine Story” because one gets a glimpse at the unintended consequences of DADT. But it’s as if the concept of the movie is where it ended.

The filmmakers have a difficult time with getting beyond the message to tell a truly engaging story. As such, the politics of the movies are always too close to the surface, and when the filmmakers try to veer away from politics into pure story (as when Alex tries to rescue Saffron from her meth-addled boyfriend’s drug lair or when a man Alex bests in a bar fight begins to stalk her and take clandestine photos of her with another woman) it’s hard to become truly engaged by the narrative.

“A Marine Story” could have taken a lesson from Biloxi Blues. Biloxi Blues is a comedy starring Matthew Broderick and Christopher Walken, a sentimental and humorous look back at recruit training during World War Two. It’s a two hour movie, but in one five minute segment we get all the power of the issue that it took “A Marine Story” 90 minutes to tell. One of the recruits, a kind and shy boy who always stuck up for the other guys in the platoon, is revealed to be homosexual. He’s taken away in front of the entire regiment, presumably to prison. It’s a devastating and moving moment, and it works because the character felt like a real character, not a walking rhetorical point.

In “A Marine Story,” Alex is at times a compelling character and the performance of Dreya Weber is very strong, but we never feel like we are too far away from political and social pot shots, and the movie does have some contradictory moments.

For example, Alex hoists the American flag immediately upon returning home so we are meant to see she is a patriot. But patriotic toward what? The military is generally sneered at. Her superior in Iraq wants to help her, but then it only seems to be a ploy to bed her to prove she is heterosexual. When folks in the town get wind she is gay, someone paints “Fag” on her car. She covers the graffiti with American-flag car magnets, and as she drives through the town a series of country bumpkins and other rough and tumble types blindly shout out things like “USA, woo!!!”

I think the idea is to show that even though the military has mistreated her, she is loyal to her country and loves it. But then why are fellow patriots around the town depicted as little more than mindless rubes? We don’t get any sense that she may regret sending Saffron off to a military that has treated her so callously. In fact, it’s kind of a back-handed compliment to the armed forces: boot camp is better than meth addiction or jail.

These reservations aside, “A Marine Story” does not drag even if its narrative stretches credulity at points. It’s the kind of film that is earnest and probably deserved more attention as opposed to another 4,000 screen release of some run of the mill blockbuster with a bloated budget and too many explosions to count.