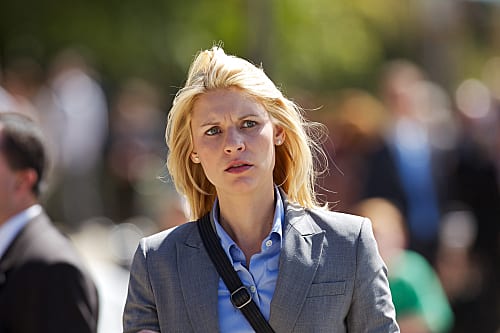 For those who are spoiler-sensitive, SPOILERS ABOUND. I will be talking about a climactic moment towards the end of the episode, so prepare yourselves. I will give a warning for SPOILER ALERT as I approach the delicate information for those who are interested in the rest of the review, but don’t want this part spoiled for them. Now, back to our regularly schooled program.

Obviously, everyone is going to point to the painfully tense sequence at the end of the episode (the only other show that can makes me that fearful, as if my own life were in danger is “Breaking Bad”) when they tell you how awesome this episode was. Despite my mutual adoration, I would like to point to a few other moments that separates this show from the rest of the dramas out there.

The first one took place in a ratty gym, where Brody’s best friend, Mike, was perfecting his jump shot. Since the reveal that Brody is in fact involved with Abu Nazir, I have picked up on Damian Lewis’ subtle facial expressions that indicate when he is feigning interest or loyalty and I can pick out when he is genuine and in the moment. That scene at the gym was a elaborate mixture of both, played with precision by both the character and the actor. His motives at this point are clear. Mike is a means to an end. If Mike can convince Jess that he needs to “serve his country somehow” for his sanity, then he can reach the objectives of his jihadist boss. Though he may be on the verge of going ballistic sitting in his quaint suburban home all day, we know that he is under orders to run for the open seat in Congress. Abu Nazir, for whatever reason, needs him to become an elected official. Whether Nazir is more of a jazz musician, going with the flow, adapting his sinister plans as he goes or an almost comically evil overlord that can anticipate everyone’s moves remains to be seen, but I sincerely hope for the former. Otherwise, this incredibly meticulous drama, becomes an overwrought puzzle intent on tricking the audience instead of shattering our expectations of TV in its portrayal of our complex, moral world.

Now, back to the delicate character moments. Mike has no clue, or at least no reason to believe, that Brody is using him for treasonous purposes, but he could certainly have practical suspicion about why his best friend would forgive him for dancing the horizontal polka with his wife while he was still alive. It’s the bro code. Even when you THINK it’s cool to sleep with your boy’s ex…DON’T DO IT. Despite this eternal man law, Brody appears to legitimately forgive him. Whether it was with the goal in mind or not, Mike, and I, bought it. He fumbles over his words, he curses, he looks away in shame. Dare I say, it was an Emmy worthy performance. No really, if Damian Lewis is not at least nominated I will streak across the stage—no, wait I will regret that. Let’s just say I will be irrationally angry,

The second “moment” I am speaking of is when Carrie interrogates the Saudi diplomat. Internet research has yielded no spell check for his name, but I believe it’s Al-Zarhani. At any rate, Carrie’s relentlessness knows no bounds. Saul gave her explicit orders to eviscerate the motherf****r, but jeez. Their gameplan going in was to entrap him at the bank where he is in debt to the tune of $750,000, and expose him for being a closeted homosexual. This revelation would be more than shameful for a Saudi man, and they’re banking that his three wives (now that’s an alibi) don’t know his dirty secret either. Much to their surprise, the diplomat is not easily blackmailed into giving them the intel they wanted on Tom Walker, Brody’s former POW-mate that they suspect has been ordered by Nazir to carry out a sniper assassination of the president. The diplomat claims they could tell the whole world and he would not care. His exact words were “I suck cock. Yummy, yummy, yummy.”

Okay, then! As a result, he begins to walk out the door since the CIA seems to have lost their leverage when Carrie brings in the big guns thanks to her night-before-interrogation study party with Virgil (for those who have been with the show since the beginning, it’s good to have our cheeky surveillance man back, isn’t it?). She asks him hypothetically who his favorite daughter is. Expectedly, our prepared student already knows. And when she threatens to deport her back to Saudi Arabia where she will, “get fat and wear a burqa,” he starts singing like a canary. Yeah, it’s a +1 for “the good guys,” but furthermore, it illustrates Carrie’s ruthless way of handling people. She will keep knocking furiously until someone answers (like Walter White of “Breaking Bad,” She is “the one who knocks!”). And her methodology is not entirely unethical, certainly not to the torturous degree of Jack Bauer on “24,” where everything was SO DAMN IMPORTANT! Carrie unfortunately carries this stubbornness into her personal life with less success.

This is where the last character moment comes into play. Carrie had gotten a call while cramming with Virgil about the diplomat’s daughters from Brody. He claims he has something personal to meet with her about. She suggests “their bar” and he says your house is fine. And like any woman, or person really, she’s ecstatic her crush wants to come over. Butterflies in your stomach when the cute guy calls is universal. She plays it cool though, and when Virgil asks, she dismisses it with vulgarity. The next night, however, she goes in for the kill, as if Brody were just another diplomat she has to make squeal. She applies the lipstick, she slips on the slinky black number and pours the wine. But Brody just wanted to make sure she would keep her mouth shut about that weekend in the cabin. Pow, gut check. That weekend that meant so much to her, the first seamless human interaction she’s had in a while, the romance that felt so real, despite her secondary terrorist-squashing motives, is simply a blemish on his record that he doesn’t want to resurface. This time, no matter her preparations, no matter how bad she wanted it, she didn’t get him. Carrie, and by association Claire Danes, have been revelations to the TV canon because not only is she an active pursuant, someone who shakes the foundation of any structure she walks into, she is also a victim like all of us, a victim of a world that doesn’t play fair, and neither does she.

The following sequence where Carrie cries in her kitchen because of her failure then segues into the failures of Saul. We don’t get any dialogue. Just a man buying a Fiji water from the vending machine who is camping in his office tonight. The implication is home is meaningless now that it’s devoid of his beloved, Mira. He brought some peanut butter and crackers with him but he forgot the knife. So he uses a ruler from his desk. This attention to detail, the care with which this show treats its characters is admirable, and that ruler to me was as significant as any line of dialogue or any tragic, action-packed climax.

Speak of the devil, here we are folks. SPOILER ALERT! PROCEED WITH CAUTION! BEWARE OF DOG! ENTER IF YOU DARE!

Okay, now that the chosen few are left, did you see that coming? Did you see Carrie failing twice in a matter of twenty-four hours? How heartbroken were you when you saw the innocents with legs blown off and faces obliterated, and Carrie leveled by yet another surprise. Tom Walker saw them coming. Despite the diplomat being under CIA surveillance, despite him going about signaling a meeting just as he usually did, a Tom lookalike brought a suitcase bomb in Farrugut Park and blew up the lunch crowd. Damn. Saul tells us, and a bedridden Carrie, that the suicide bomber was a homeless man Walker met at a shelter, Samuel Everett, whom Walker paid off to bring the suitcase. He also confirms the suspicions that have been brewing in-show, and among us fans, that there is a mole in the U.S government. Though I wouldn’t put it past the former “24” writers to do employ the mole plot, I’m not so sure. After he mentions this the Vice President comes on the tube. I could see that, if that cut was deliberate or even suggestive. I could also see the diplomat lying to the CIA and the picture in the window means some variation of…”They got me, help me take my own life to prevent further damage.” At that point all he had admitted was what they already knew; that he was taking money from them to pay off his exorbitant debt in exchange for intel and Tom Walker is working with Nazir. The fact, that anything can happen still is a credit to the “Homeland” staff for crafting such a multi-layered and intricate universe that even the real-world cynics and internet trolls can’t predict what happens next.

I cared very little about the episode title’s plot thread. It could be that I was more appreciative of the intimate scenes between Mike, Brody and Jess (in all possible pairings) that I wasn’t phased that he is now running for Congress. There was no real stakes. In order to keep the momentum she has to give the a-okay. And also I have no idea yet what the incorporation of his position as elected official will mean for Nazir’s scheme. I am certain, however, that I can’t wait to find out. I was enthralled by mostly every scene, hanging on every word, and I continue to be amazed by the focus on minutia in plot, character development, appeal to audience pathos (I wept ever so slightly seeing Carrie scarred and in shock amidst the explosion’s aftermath), and narrative tension. I’m officially declaring my intention to give this episode…an A-.