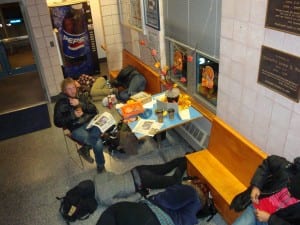 BLAST: Who are you?

BLAST: What do you do?

MK: Within Occupy Boston I work with the Direct Action working group. We help to plan marches, as well as try to keep everyone safe during the marches. We also help to coordinate different relevant trainings. Within my Affinity Group (a group of 6-12 people who you really really trust) I helped to build and maintain our sleeping quarters. We had one of the best sleeping areas within the camp. We had two tents, a porch, couches, bike generators and lighting. We all worked hard to build that place, and it showed in that it was one of the last tents standing.

MK: I have a laundry list of gripes with the state of our country today. The problem is, I, as a working class person, have no other method left to have my concerns heard.

MK: I have two favorite memories of Dewey Square. One was the second night. We had a big tent, and the next thing we knew the entire immediate neighborhood was over playing music and debating politics. Debate is almost the wrong word because even though we all has staunchly different views we all stayed up until at least 3 a.m. .talking about why we came to those ideas, and even if we disagreed we respected each others opinions and more importantly we gained more respect for each other. The other favorite memory is one I don’t really remember, but sometime along the way my affinity group came to the realization that we were no longer just friends, we had become the single most loving and dysfunctional family the world has ever seen.

MK: As for the future there are a lot of plans. Most people agree that we need to hold out for the spring. Immediate plans are to get a home base, housing for everyone, and then plan for the American Spring which is only a few months away.