“What’s great about this country is that America started the tradition where the richest consumers buy essentially the same things as the poorest. You can be watching TV and see Coca-Cola, and you know that the President drinks Coke, Liz Taylor drinks Coke, and just think, you can drink Coke, too. A Coke is a Coke and no amount of money can get you a better Coke than the one the bum on the corner is drinking. All the Cokes are the same and all the Cokes are good. Liz Taylor knows it, the President knows it, the bum knows it, and you know it.“

I’ve always felt like an outsider. I’d always thought that the other kids in my primary school were into all the new, cool stuff and I was the weird one listening to old things like The Who and teaching myself to play chess. I tried making friends with my classmates, but I guess they thought I was too different and odd. I’d always try to connect with the other kids, like the one time some girls in my class were talking about the new episode of Survivor that had aired the night before and I tried to chime in my thoughts, but I was basically ignored as I always was. I remember in fifth grade, a group in my math class made a rap about basic division to the tune of “99 Problems” by Jay-Z (now I’ve got 99 problems but division ain’t one!). I’m pretty sure that at least all the boys in the class got the joke except me, I’d never heard the song, and it wasn’t even that new at that point! (Side note: It is very weird for me to think now of a time when “99 Problems” didn’t exist.)

I felt few moments of unity with my classmates in elementary school, but one of them was a moment I’ll always treasure in a weird way. Late November in third grade, our Principal Mrs. Vietri came onto the loudspeaker to make an announcement at an odd time. She told us that George Harrison had just died. She gave an obituary and held us all in a moment of silence. This kind of announcement, by the way, I’m pretty sure had never happened before or since. For that one moment in time, everyone in the class was in grieving; specifically, grieving over someone I cared deeply about, someone who’s work had always been present in my life. It’s the first time I can think back to when I felt like a normal person who did things that normal people do.

I was bullied often enough for it to count. I was in middle school now, and I was the kid who liked anime and collectible card games and I balanced my books on my head in lieu of having a backpack (I was very good at it, too). I started to play guitar between 7th and 8th grade in the summer. I started out just knowing stupid, uninspiring riffs like “Iron Man” and “Smoke on the Water”. You know, the boring stuff that every nerd learns before giving up and going to dentistry school. One night, a change started inside of me. By that point, I had already started listening to Radiohead, and they were making these weird bleepybloop sounds with strange protosynths from France and they had lyric sheets in weird, fragment bits of text about kicking squealing gucci little piggies that I could not explain the meaning of to anyone I loved it. I remember coming home from Borders one night with a new copy of Kid A. I slid the disc into my clock/radio and was stunned as these textures and tones poured out through my tinny, tiny speaker. It was special and gorgeous and the record remains one of my favorites ever (also by every critic. Top of every end-of-decade list unanimously.) but it didn’t feel like anything had changed for me. Radiohead was too well known a band, I didn’t feel unique by listening to them (though I definitely felt smart.) They were just too old and I still felt out of place in my generation. 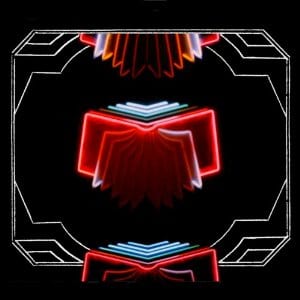 But anyway, on to the life changing epiphany. I saw Arcade Fire perform their song “Intervention” on SNL one night. I had never heard of this band before, but they were just coming out with their second album Neon Bible. It was exciting for me because I was hearing new music by new people for the first time. Arcade Fire’s become a very major act in the last decade and Neon Bible was their first hit record (it charted at #2 on the Billboard top 40) and, hearing them for the first time, I felt relevant. It started a gradual shift in me to a point where I could make friends who also weren’t “weird kids” (they’re still my best friends in the world. Shoutsout to Bryan and Brendan and Ben, luv u bros, yr the best). The same kid who poured orange juice all over my Magic cards in the cafeteria was now talking to me about how he thought Funeral (Arcade Fire’s first LP) was better than Neon Bible (he’s right, it’s way better).

I started listening to more and more outre and experimental musics throughout high school like Animal Collective and Memory Tapes (one time I tried asking Dayve from Memory Tapes if I could shadow him for a day as a school project. He said no) and older indie bands like Neutral Milk Hotel and Pavement. Something started happening, though. The music I liked started becoming popular! Like, it wasn’t as if I was hitching myself to a musical bandwagon like some bandwagon-hitching musical jerk. Either the tastes of my generation started to shift towards me or my tastes were starting to match those of my peers. In 10th grade chemistry, there were speakers and I’d always hook up music for people to listen to during labs. One band that ended up being really popular for me to play is called Fuck Buttons. They were noisy and screamy and made songs with modified children’s toys that would go on for over seven minutes for most of their songs. I always thought that everyone was into it because they called themselves Fuck Buttons, which is inherently hilarious. I think I was wrong though. Within these walls of noise were subtly qualifiers of dance music. The steadily rhythmic pulse and aggressive sound of the music is definitely something that has completely penetrated the mainstream. Dubstep and other forms of EDM are now a massive industry and dance music is the current cultural zeitgeist. Even Arcade Fire has adapted disco-esque bits to their sound on their new album. Fuck Buttons even broke through! Their music was played during the opening ceremonies of the London 2012 Olympics (two songs! By Fuck Buttons! TWO!!).

Jay Z and Beyoncé on a private island. Media credit to Celebrity Net Worth

I’ve been trying to better understand the power of pop music. Pop aims to transcend gender, class, race and all other social divisions and, in that way, it’s the great mediator of our culture. At the end of the summer, I went to the Made in America Festival in Philadelphia. I saw all of the kids high on molly in front of the bright lights of the EDM stage (why does the zeitgeist always have to surround drugs? I hate drugs) and having themselves a grand old time getting down to these massive beats in the mud. The festival itself was curated by Jay-Z. He had headlined the year before, but this time it was his Queen B. Hov and Beyonce are the biggest pop stars in the world right now. During the wait before her set, Jay came out onto a statue behind us and waved to the crowd. He was greeted like the goddamn King of Spain, I swear to god. Everyone, myself included, was screaming in pure excitement. Beyonce gave a spectacular performance. In a way that almost no other people on the planet can do, Beyonce connected with everyone on a deeply intimate level. Everyone knew and loved everything about her, and everyone was standing on the hard street, facing one direction, and screaming along with “Crazy in Love”. The only other people who could ever command this kind of attention and adoration today are pop stars, presidents and the Pope. Pop has become the religion of my generation and I’m so glad it found me.