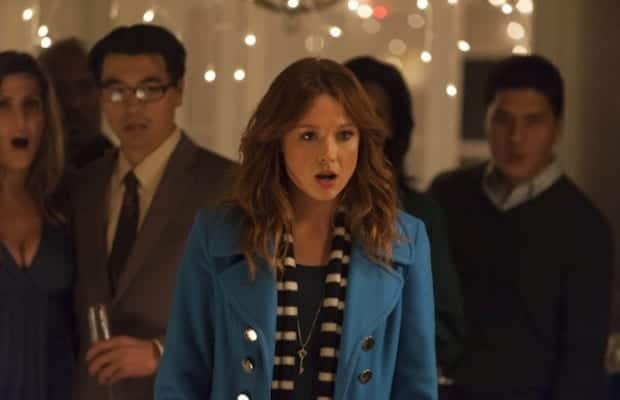 Ellie Kemper guest stars as Heather, Josh’s other girlfriend, on the Christmas episode of The Mindy Project

Holiday episodes are clearly The Mindy Project’s strong point, considering “Thanksgiving” and “Josh and Mindy’s Christmas Party” are my two favorites so far. Also, both of these episodes did a fabulous job of making Danny a character that I’ve started to care about and even like. That’s mostly because Chris Messina is doing a great job with the acting, but the scripts develop his more empathetic and emotional side than other episodes thus far.

The episode starts off with another typically romantic idea—ice skating at Christmas time—and injects a little more reality into it. After ditching the three hour wait time, Josh pays off a security guard at an indoor rink to let them skate, which is cute until the junior hockey team shows up for practice. Then it’s not so cute. Josh makes a questionable comment about how Mindy “doesn’t look like the kind of girl who could faint” (of hunger), but overall I was okay with their relationship.

In her office, Mindy is getting way into the Christmas spirit with her huge snowflake earrings and her Christmas music playing. Danny cuts that off fast because he’s kind of a Scrooge-type guy, and Mindy announces she and Josh will host the annual office Christmas party. Danny tries to just contribute money, but ends up promising to bring a gingerbread house.

Mindy’s apartment (which, by the way, is gorgeous and I would like to live in it) is completely covered in decorations. She wants to prove with this party that she has her life together. Compared to the pilot of this show, she certainly does. Look at that, character development went and snuck up on us. Morgan brings a karaoke machine that only plays Spanish music that he found in a dumpster outside of a Mexican restaurant because of course he would, and we meet Shauna’s very cute cop boyfriend. I can’t remember hearing about him before, but hey, no big deal. It’s not like Shauna gets enough screen time to tell anyone about her life as it is.

Danny arrives, bearing a painstakingly constructed gingerbread house. He’s really proud of it, but doesn’t want to admit that too much. This is very much like when we saw him working at playing “Piano Man” in the Thanksgiving episode, and I am very glad he’s become more complex than just “the main guy who’s a jerk” stereotype he had been stuck in from the get-go. Josh enters the party in slow motion to a weirdly censored version of Rihanna’s “Rude Boy.” Which I guess is appropriate for his personality, now that I think about it.

Mindy chats with Danny in her room while he finds his coat, and plays the voicemails on the phone in her charger in case there’s an emergency delivery she has to go to. Instead, it’s actually Josh’s phone, and the message is from a woman asking how San Antonio is and telling him she loves him. Oops. Danny tries to talk Mindy into just making it through the party, but we all that isn’t going to happen.

Minor character happenings are going on (Morgan is singing karaoke rather poorly while Betsey talks to Shauna about the missing posters she put up for an umbrella she found), but the focus is on Mindy as she reveals her past with Jeremy to make Josh uncomfortable before heading outside barefoot to replay the message a million times.

Danny spots her and tries to take the phone away from her, but accidentally dials the woman’s number. He covers well enough with a story about being a florist who found the phone, but then Mindy shouts about her sleeping with her boyfriend and spoils the illusion. Danny advises her to breathe and deal with it after the party, and even awkwardly hugs her, but she ignores his advice. Chris Messina really nails Danny’s whole “I’m not in tune with my emotions but I’m trying for you” vibe he has going with Mindy in this episode. It’s a hard line to walk, but I think he does it well.

Inside, Mindy asks Josh to help her reach something in the closet. He’s thinking sex, but she recites the voicemail at him. Completely caught, he admits to dating someone else, though his intentions were to break up with her. Yeah, okay. Mindy makes him fake a work emergency to leave, and when the  room full of medical professionals question a sports agent bowing out with a “work emergency,” Mindy tells them Kobe Bryant’s been shot.

Morgan insists on Josh staying at least to hear Mindy’s speech, but she barely makes it a couple sentences before starting to break down. Mindy Kaling’s wheelhouse is clearly comedy, so I was surprised to see her handle this scene with such subtlety. Her tears aren’t played for laughs, though Danny’s attempt to read her eight page speech is. I kind of hate how much I like him now, damn it. I’m not complaining that he’s developing; on the contrary, I am pleasantly surprised. I just liked having a “bad guy” of sorts. Oh well, I guess I can just blindly dislike Josh now, though I doubt he’ll be in more episodes.

The speech is interrupted by the arrival of Heather (Ellie Kemper), who’s here to meet Josh’s mistress. She found them using some phone tracker app that they share and reveals that they’ve been dating for two years. They even co-owned a dog whose kidneys failed. That is commitment. She and Mindy have matching key necklaces, though hers has more diamonds on it. I’m not sure why I didn’t see this coming; Josh was always kind of a jerk. No wonder he didn’t want to commit to Mindy forever.

Heather calls Mindy a “chubby Indian girl,” for which all her friends rush to her defense. Josh manages to slip out in the ensuing confusion as Heather begins wrecking Mindy’s kitchen, then Danny’s gingerbread house as literal homewrecking revenge. After a non-event of an actual physical fight between the two of them, Shauna’s cop boyfriend cuffs Heather and Mindy retreats to her room. I’m mostly familiar with Ellie Kemper from The Office and Bridesmaids, where she plays basically the same bland vanilla-type girl, so seeing her rage at Mindy was pretty entertaining. I wish she had gotten to guest star as someone who could have been friends with Mindy; their scenes on The Office together were some of my favorites.

Danny comes into Mindy’s room to comfort her because he didn’t want her to be alone. Curse you, Chris Messina, for being so good at humanizing Danny. Seriously, I don’t think his character has been this empathetic in the entire show so far. Granted, he does hit Mindy through the covers in a weird attempt to pat her in comfort, but overall the sentiment is clearly genuine. Mindy asks him to make a pact that in five years if they’re still single… I rolled my eyes preemptively, though, because she ends that sentence with mutual homicide. I still think this is an indication that the writers could be leaning in a Mindy/Danny direction sometime in the future; I’m less upset about that now than I have been in the past, but I don’t know. If it happens, I hope it’s after Mindy figures out who she is without a guy.

Out in the living room, Jeremy gives a very nice pep talk to the other office members, and they set about salvaging the party for Mindy. She emerges feeling slightly better, and the episode closes on Jeremy singing “La Bamba” and everyone dancing, even Heather, cuffed to the railing.

All in all, I really enjoyed this episode. I swear, it really must be a holiday thing, that’s what they’re good at. Ellie Kemper was a fun guest star, and I said this eighteen times already but Chris Messina sold this episode for me. I’m excited to see where they take Danny’s character next, and I really want to know how Mindy is going to handle this setback in her personal life. I feel like she can’t completely fall apart the way she did in the pilot, she’s grown since then, but there’s not a whole lot of comedy in maturely dealing with a breakup either. Maybe she’ll cope by dating a string of attractive hilarious guest stars. I wouldn’t be mad about that.

Mindy (about Josh): “He’s not real in the way that Santa Claus is real, he’s real like I just had sex with him this morning.”

Betsey (also about Josh): “He looks like an example photo at a barber shop!”

Danny (about his gingerbread house): “The insulation is cotton candy, and… you’re all looking at someone else.”