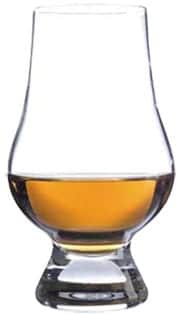 My dad drinks Scotch, so I drink Scotch.

Odds are, you have a similar tale. Scotch, single malt, bourbon — our dads seems to be whiskey guys, and there’s something tough and sophisticated about that.

And that means I drink whiskey too. Where do we begin? Well Charlie Whitfield, a brand ambassador for The Macallan offers a few tips on whiskey drinking and whiskey etiquette that perhaps will make you outshine your father in whiskey appreciation … one day.

BLAST: What are some of the common whiskey terms? What do phrases like “single malt” and “cask strength” mean?

CHARLIE WHITFIELD: Cask Strength — for this style of Scotch the whiskey comes straight from the cask and has no water added to it. Normally water is added to bring it down to bottling strength, usually to around 40-43 percent alcohol by volume. In the case of The Macallan Cask Strength, it is bottled at original cask strength, 59 percent ABV, without chill filtration or the addition of water. This delivers an exceptionally rich Macallan, wonderfully rich in color with dried fruits, spice and chocolate orange, best enjoyed with a splash of water to release the complex and sumptuous flavors.

Blended Scotch (like The Famous Grouse) which makes up around 90 percent of the Scotch whiskey industry, is a mix of different types of grain, corn, and single malt whiskeys and can come from any number of distilleries (anywhere from two to sometimes 50). A single malt making up around 9 percent of total Scotch production, can only come from one geographical location (one distillery) and can only be made using malted barley, water and yeast.

Vatted Malt is a blend of two or more single malt whiskeys.

Cask Maturation — Over 60 percent of all the aroma and flavor in Scotch comes from the interaction between the oak casks and the spirit during the maturation process. Therefore it is vital to use oak casks of the very best quality. The Macallan currently invests around $20 million dollars into our oak casks each year, hand crafting and picking each and every one.

BLAST: What kind of glass should one drink Scotch in?

CW: Whatever drinking vessel you can get your hands on! Whiskey is a drink to be savored, time spent enjoying the flavors on the nose are equally important as those on the palate. It is down to personal preference, though I would recommend a glass that tapers towards the mouth, the result being that it captures the delicious and varied aromas in your Scotch. They say that there are around 150 different flavor compounds in a single malt. The Glencairn style glass would be a good example to start with.

BLAST: What’s the difference between Scotch and other whiskeys?

CW: In order to be called a Scotch, the whiskey must be made in Scotland and matured in oak casks for at least three years. Whiskey is also made in other countries such as America, Canada, Ireland and Japan.

BLAST: What is a good intro-scotch for a young person to get started with?

BLAST: How should a person drink Scotch? Ice or no ice?

CW: At the end of the day it is your Scotch, you should drink it however you enjoy it! I would suggest trying it neat to start with, so you can enjoy it in its truest form. Adding a couple of drops of water actually opens up the bouquet of the Scotch and releases the full aroma profile. Adding ice slightly numbs the aromas and flavors but is a refreshing alternative. The Macallan Ice Ball machine creates perfect spheres of ice, which due to less surface area, melt much more slowly, chilling your Scotch to perfection without turning it into a diluted mess!

The unrivaled quality and consistency of the brand, combined with the unique history and heritage of the distillery. Just as important to me are the people who represent The Macallan and the “family” approach I’ve already noticed to the way we do business.

My first memories of Scotch whisky are more for it’s medicinal purposes, helping me to sleep, whilst at anchor during particularly stormy nights when sailing off the West coast of Scotland. It has now become my drink of choice.

Unofficially I’ve been associated with The Macallan since I was two years old! My granny entered me into a raffle and I won first prize, two cases of The Macallan 10 Year Old. My father drank one case but gave me the remaining case when I reached legal drinking age! The Macallan also played a part in my proposal to my American wife last year, in the snowy Highlands of Scotland, but that’s another story!