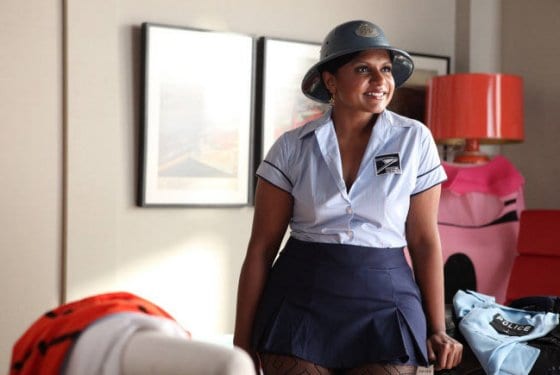 After two weeks off the air, The Mindy Project returned tonight with its Halloween episode. It’s hard to tell if it’s just because of the time spent away, but “Halloween” seemed largely underwhelming to me. There were some shining moments (I particularly love Mindy’s mash-up costume ideas), but there was also a lot of humor that just didn’t stick for me.

The episode opens with another voiceover from Mindy, though the romance of her talking about romance in New York is quickly brought down a peg with the mentions of it being the season for ladies to ditch their razors until April. I’m not saying there isn’t an element of truth there, I’m just hoping the show starts to move away from the rom-com-but-not opening voiceovers soon.

Mindy and Josh, her newest boyfriend who we met in “In the Club,” are having a thoroughly unromantic 8 AM coffee date when he invites her to come with him to an ESPN Halloween party. They go all out with the costumes at these shindigs, and Josh makes it a point to add that he brought a model last year so Mindy better bring it with her costume. I can’t tell sometimes if Josh is trying and failing to be light and jokey or if he’s actually kind of a jerk. But, given Mindy’s hesitation about him in general, maybe that’s exactly how his character is supposed to be.

Mindy’s office is decked out for Halloween, complete with a pop-up ghoul that startles Danny (though Morgan fails to get it on video, having filmed himself instead). Jeremy breezes out of the office, excusing himself to run an errand that will take the rest of the afternoon while Danny struggles, stammers, and sweats his way through trying to make the same excuse.

Mindy finally cuts him free, and he joins Jeremy in the elevator as they head off on their mysterious errand together. I was initially confused about why the two of them would hang out together, because the show hasn’t given the side characters enough of a chance yet to establish all of their relationships to each other. I didn’t think Danny and Jeremy were friends, but after this episode I think I like the idea of them hanging out together more, and hopefully we’ll get to see their friendship developed.

In the next scene, Mindy’s walking the halls of the hospital, I can assume fresh from delivering a baby or something. The show doesn’t make it abundantly clear, because what’s important is that she runs into her ex, Tom (Bill Hader, back again) in the hospital. Literally. With a door, in his face. I think it was supposed to be funny, but ever since the Maggie incident on The Newsroom, I’ve soured on the humor of women hitting men in the faces with transparent doors.

Tom reacts as if Mindy assaulted him on purpose, though considering her drunk and disorderly conduct at his wedding, that’s kind of understandable. She patches him up, and apologizes for ruining his wedding. He actually apologizes for hurting her, too, and they have a nice moment before Tom admits he was recording the conversation secretly in case she threatened him. He stops the recording, and they get to talking about what’s new in Mindy’s life (Josh). Tom says he sounds kind of like a jerk from the way she talks about him, and Mindy confesses she’s considering ending it. Josh isn’t the kind of guy she can see herself snuggling up to and watching Breaking Bad with, and that’s what she’s looking for. Tom, the spoiler-phobe, overreacts for just too long about the show for the joke to stay funny, but they part on amicable terms; he even waves away the orderly he hired to tackle Mindy if she attacked again, which just seems like an excessive backup measure to take.

Danny and Jeremy’s secret errand turns out to be a trip to the Long Island DMV to get tested for their licenses. A couple teenagers in line ahead of them scoff at their “advanced” ages, and Danny quickly retorts with the statistic that the average New Yorker doesn’t get their license until 26. The teens respond “Whoa, nerd!” Danny looks like he’s ready to throw down about it, but Jeremy talks him out of that dumb idea.

Back in the office, Mindy is talking to Shauna, Betsey, and Morgan about how empowered she feels after running into Tom and clearing the air. Morgan asks to see what Tom looks like because he’s the only one who’s never seen him. Well, okay, the reason he gives is that when he pictures Mindy and Tom hooking up he just sees her getting all up on a giant question mark. Sometimes Morgan is funny, sometimes Morgan makes uncomfortable comments. This is one of those uncomfortable times.

Betsey hops on Facebook to show Morgan Tom’s profile, and she awws over the “ghost” he’s using as his cover photo for Halloween. You work in an OB/GYN’s office, sweetie, and you don’t know what a sonogram looks like? I can’t suspend my disbelief that far, I’m sorry. Mindy, seeing this and recognizing it as a picture of Tom’s unborn child like the medical professional that she is, immediately starts to panic about her own life. He didn’t mention a thing about expecting a baby with his wife in their conversation, and Mindy takes that as a sign that he thinks she’s pathetic with no real prospects. She shuts herself in her office and calls Josh from her vantage point on the floor to accept his party invitation.

Over at the DMV, Danny is majorly stressing out about getting his license. To him, a license means being free. He literally says it’s a license to be a man and thankfully before I can roll my eyes so hard I injure my brain, Jeremy says he’s just getting a license because he hates bringing his passport to bars and it’s actually funny.

It turns out that Danny has actually taken this test multiple times. This time he passes the written portion, though he’s upset he got the same score as Jeremy, who naturally didn’t study at all. Some of the DMV employees cheer Danny on as he heads over to the desk to take the practical part of the exam, but he makes Jeremy go first. Jeremy proceeds to charm the test administrator, Barbara, much to Danny’s frustration. I just wish my DMV operated as quickly as this one seems to.

In Mindy’s office, she’s stressing over what awesome costume she can wear to impress Josh and the rest of the ESPN party. Shauna, Betsey, and Morgan bring in boxes of costumes, but their suggestions are less than helpful. Betsey suggests Linus from It’s the Great Pumpkin, Charlie Brown, but Mindy’s never heard of it. Morgan suggests a funny costume, though his idea of funny (a urinal, a butt, a tampon) is anything but.

Mindy decides that a woman should not have to choose between being funny and being sexy for Halloween (amen, Mindy), and shows off a few of her mash-up costume ideas: Tinkerbell Tailor Soldier Spy, Dirty Harry Potter, and Lil Wayne on the Prairie (the last one is my favorite). I thought they were funny, but her coworkers give them all the thumbs down and Mindy gives up.

Jeremy comes back from his road test with a perfect score (of course), but Barbara is less than charmed by Danny and his nervous sweating habit. He psyches himself out so much that he blows through a stop sign, almost hits a trick-or-treater, and ends up driving the car into a heavily decorated front yard. Dejected, he arrives back at the DMV with fake cobwebs covering the front of the car, another failure at getting his license (and you know, his license to manliness along with it). Danny takes his frustration out on Jeremy, mad that Jeremy’s breezed through life when Danny’s always had to work at it.

Cut back to Mindy, this time in her apartment. She’s settling in to watch some cheesy murder show alone on Halloween, and her cat-lady self-image is complete when she starts petting a cat. It’s not even hers, though, and she chases it back out through the window. I wasn’t expecting that, and this was one of the jokes that worked for me for exactly that reason.

Mindy gets a call back from her long-lost friend Gwen, who’s been busy taking her kids trick-or-treating. Gwen seems to exist only to show what Mindy doesn’t have yet, and to be there to dish out some love advice on-call when Mindy needs some from a person she doesn’t work with. Basically, I don’t buy Gwen as a three dimensional character yet, and I won’t until the writers flesh her out a lot more. Gwen’s daughter Riley gets on the phone with Mindy and starts talking about the Great Pumpkin and how Linus wasn’t stupid to wait out in that pumpkin patch for what he believes in. I guess convenient love advice for Mindy is hereditary. Inspired, the Peanuts theme plays in the background as Mindy rushes around her apartment to cobble a costume together after all.

Back at the DMV, Danny is still fighting with Jeremy about the license ordeal. Jeremy confesses that he’s actually the one who’s jealous of Danny, because Danny actually cares about things. He cares about them passionately and deeply, and that’s something Jeremy’s never been able to do. Wow, shallow Jeremy was the last character I expected to be so self-aware. Of course, he has to make it sexual, implying that Danny must be equally passionate between the sheets, but thankfully that conversation is cut short by Barbara’s reappearance.

She’s come to give him a second chance at the test, and this time he passes with a 70 out of 100. Jeremy goes to hug him in congratulations, but Danny ducks it because I’m guessing he’s the kind of guy who’s not okay with showing affection to other guys pretty much ever. Jeremy did convince Barbara to give Danny the second chance, but not by sleeping with her, as Danny expected. Instead, Jeremy told Barbara that Danny was so skittish because he had been molested in a car once and she took pity on him. I don’t know if the writers are trying to be edgy with lines like this, but casual references to sexual assault (especially in humorous contexts) make me extremely uncomfortable and I hope this is the last of it for the show.

Mindy meets up with Josh at his apartment dressed as Diane from Cheers (I’ll be completely honest, I didn’t know who she was supposed to be until she said it). He’s dressed as Inigo Montoya from The Princess Bride (love it). Mindy says Inigo is way better than Westley, to which Josh responds “Duh,” which is a behavior that clearly irks Mindy, but she lets it go. Turns out, Josh picked this costume because he found out it was Mindy’s favorite movie via some light internet stalking and called all over the city looking for it. Mindy interprets this as sweet; I just find it mildly creepy, especially when he admits he’s never seen the movie (Side question: how has anyone never seen The Princess Bride?). They head off to the party together though, and for Mindy’s sake, I hope Josh turns out to be less of a jerk than he’s been acting all episode.

Jeremy: “I bet on Halloween, actual monsters dress up as DMV workers.”

Mindy: “What I need you to do is take these scissors and cut a cleavage hole in my crayon costume.”

Danny: “Permission to wipe my brow?” Barbara: “I’m not a sea captain.”

Jeremy, about Danny’s return from the road test: “Always yield to spiders.”