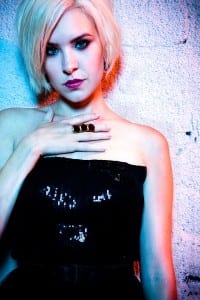 The sixth season of Showtime’s “Dexter” and IDW’s third and fourth issues of “Suicide Girls”, all depend on one thing: the work of Brea Grant, actress and comic book writer for IDW’s “Suicide Girls” series and previously “We Will Bury You” series.

Starring as Masuka’s lab intern on “Dexter”, Grant plays Ryan Chambers, a smart young lady with something dark about her personality.

Grant goes on to describe her partner C.S. Lee, “He’s really funny and quick-witted in real life. He’s not a pervert in real life either.” She continued on about Michael C. Hall’s popularity among fans and the strides they make when they show up on-location with t-shirts on and DVDs ready to be signed.

Grant gave us a sneak peak of the new season as she puts emphasis upon the new love interest that develops for Masuka.

“I feel like Masuka’s story line has been interesting, but it’s nice to give him an actual girl that can keep up with him,” Grant elaborated. She guarantees by episode three that all viewers’ jaws will drop.

Grant continues to say, “Each time I’ve read a script I’m continuously shocked about how crazy the show is getting.”

She notes that guest appearances will be made by rap artist Mos Def and actor Colin Hanks.

“There are a lot of guns, craziness, and southern accents,” Grant exclaimed. “There’s a great cast.”

“Detour” is an indie disaster film in which Grant plays the girlfriend of the main character, a man buried alive in his car after a natural disaster. The best way to describe “Detour”, as Grant tells, is ‘super intense’. 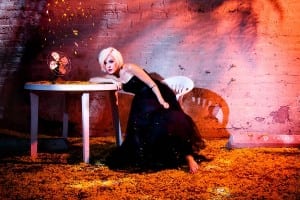 Grant went on to tell of her love for indie films and then her passion for acting. “I love doing blockbusters and letting things explode on the screen,” she said.

The actress; however, aspires to break out of the ‘emotionally draining’ horror film scene and take a lighthearted role for a change.

“At some point I get tired of super crime. I do a lot of horror so there’s screaming and crying and horror,” Grant said.

Just as Grant finished up her work with the film production “Homecoming”, also set to hit the big screens this 2011, the highly anticipated release of IDW’s “Suicide Girls” series’ issues three and fourth has come and the books are available for individual purchase within the Suicide Girls official website.

In the “Suicide Girls” series, as Grant explains, there is an elite fighting team taking down a giant religious corporate cult. The writer divulged that readers are in store for lots of ass-kicking and guns.

Alongside David Hahn, Cameron Stewart, Steve Niles, and Missy Suicide herself, Grant works to perfect this crazy girl power comic book that has a certain kick-ass vibe to it. Co-written with her brother Zane Grant, the penny series is a step beyond the duo’s previous work “We Will Bury You” as it has stricter direction.

Grant said, “It’s different because we created that idea from start to finish, but this one is definitely representative of the website. The Suicide Girls know what they want.”

Niles has devised an interesting way to incorporate the Suicide Girls into historical events throughout the comic book series. Grant described how this aspect of the comic books hints to solidify the elite fighting team’s presence in history as they canoodle with Cleopatra in Egypt and endure the horrific events that took place during the Salem Witch Trials.

Grant also praises Cameron’s direction that he’s taken with the artwork he has provided for the series.

Despite the controversy surrounding the original Suicide Girls website concerning material with bondage, knives, swords, and blood, Grant esteems the popularity of the comic book among loyal fans of the website and those of the comics as well.

“The comic book is going insanely well,” she said. “I even had a crazy conversation with a guy who was trying to ask me in a nice way whether or not there were naked girls.”

Grant’s involvement with this comic book series landed her a spot at Comic-Con 2011.

In addition to Niles, brother Zane, and a few other writers such as Joshua Hale Fialkov and David Guinn, Grant attended “Horror on the Paneled Page”, a panel discussing horror within comic books.

Grant is hopeful that “Suicide Girls” and “We Will Bury You” will be converted into television series in the future.

For more information on Grant’s work, visit her personal blog at http://breagrant.com/blog. For updates on the “Suicide Girls” series and IDW’s various other publications, visit http://www.idwpublishing.com.