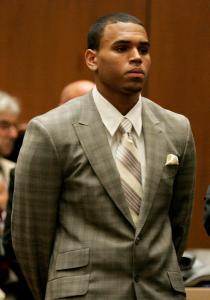 Chris Brown pleaded guilty to assaulting Rihanna in a much anticipated hearing yesterday.

The plea was the result of an agreement with prosecutors and requires 20-year-old Brown to spend five years on probation, complete 180 days of community service and attended domestic violence classes. The sentence, which won’t be official until August 5, is far less harsh than the maximum four years in prison.

Rihanna had discussed the plea with prosecutors and after the hearing, he attorney said, “Rihanna believes this is a fair and just resolution to this case.”

According to The Washington Post, Brown was accompanied by his mother and other supports, and showed no emotion as the plea was entered. Judge Patricia Schnegg said, “I think it’s commendable that you took responsibility for your conduct, sir.”

The plea also means that evidence against Brown will not be heard in open court, The Washington Post reported. This may come as a disappointment to Rihanna fans and women’s right’s activists looking forward to seeing a more severe punishment and the end of Brown’s career.

Perhaps it’s too early too tell, but for now, it looks as though Brown will bounce back. He has clearly worked hard to at the very least appear regretful and salvage his squeaky clean image. We’ll never know whether he’s really sorry, but thanks to some serious mercy from Rihanna, he won’t be completely ruined.