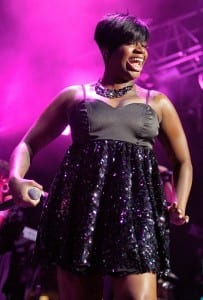 Fantasia performs at the 2011 Essence Music Festival at the Louisiana Superdome on July 1, 2011 in New Orleans, Louisiana. (WireImage)

Winner of “American Idol’s” third season, she announced the news to fans on Sunday at a concert in Jacksonville, Florida.

“You are the first persons that I share this news with,” she told the crowd. “And for a while I walked around figuring out what will they say and what will they think about me.”

Without revealing who the father is, she continued, “So, this child that I carry- God has given me this child. And I don’t have to hide it from none of y’all.”

In June, Fantasia was photographed with Antwaun Cook.

The couple made headlines last summer after Cook’s divorce from Paula Cook, who claimed the singer was responsible for her break-up. Fantasia and Antwaun both deny the accusation.