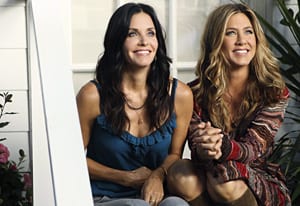 The second season of “Cougar Town” premieres tonight with a guest appearance from Courteney Cox’s “Friends” co-star Jennifer Aniston. “Cougar Town” was one of the Blast’s five shows you need to watch this season.

Aniston is the second alumni of “Friends” to drop by “Cougar Town;” last season, Lisa Kudrow played a dermatologist Jules (Cox) visits. The appearance is largely one of the stunt-casting variety; creator Bill Lawrence has openly told media he hopes Aniston’s celebrity will draw in viewers. Last season, after early success and a quick renewal, the show quickly shed viewers, averaging 7.3 million for the season.

Give this show a chance. Aniston, despite a string of unfunny and unoriginal film flops, is still pretty funny. And “Cougar Town” is also a unique comedy if you can get past that title. It’s not really about Cox’s character dating younger men; she’s in a relationship with another of the series regulars, Grayson, also in his 40s. As the show evolved, the humor became reminiscent of “Scrubs,” also written and created by Lawrence. It has the same wacky humor, and it mostly just features the main characters getting drunk and insulting each other in clever, yet loving ways. Just give it a shot.

This is the second time Aniston has guested on one of Cox’s underperforming series. She also joined Cox in the first season of her FX drama, “Dirt.” In that episode, the two locked lips in an attempt to drive up ratings. That show was cancelled after its second season.